On Sunday, November 8, 1936, Zora Neale Hurston received the exciting news: there was a zombie at the hospital in Gonaïves! Hurston wasted little time. A week later, she suspended her anthropological research in Port-au-Prince, traveled from the Haitian capital to the northern port city of Gonaïves, handed her letter of introduction to the hospital’s chief of staff, and walked with him into the hospital yard. There the zombie waited. Hurston flinched at its “dreadful” appearance, its “black face with the dead eyes” and white eyelids looking “as if they had been burned with acid.” It was “too much to endure for long.” So Hurston snapped some pictures of the zombie—“this wreckage,” she wrote—and then fled “to a more cheerful part of the hospital.” There, after sitting down and composing herself, Hurston asked the doctors to explain the terrible spectacle to which she had just born witness.

They eagerly complied. According to the doctors, the zombie was Felicia Felix-Mentor and she was born in Ennery, a village less than twenty miles northeast of Gonaïves. Along with her husband and son, Felix-Mentor lived in her native village until 1907, when she died of some unknown illness. Her husband then re-married and “advanced himself in life.” Her “little boy became a man.” In short, life in Ennery moved on, at least until the past October. That month, a traveler reported seeing a naked woman on the road. Before local officials could act, the mysterious woman showed up at a farm claiming that it belonged to her father. Eventually, the woman’s former husband confirmed the unbelievable. He admitted that the woman in such “wretched condition” was the deceased Felix-Mentor, “the wife and mother who had died so long ago.”

Two years later, Hurston recounted that incredible (and fabricated) story in Tell My Horse: Voodoo and Life in Haiti and Jamaica. “What,” she asked, “is the whole truth and nothing else but the truth about Zombies?” “I do not know,” she replied. “But I know that I saw the broken remnant, relic, or refuse of Felicia Felix-Mentor in a hospital yard.”

Today, countless Americans pretend to know the truth and nothing but the truth about zombies. We have Hurston and her contemporaries to thank for that. As Sarah Juliet Lauro notes in The Transatlantic Zombie: Slavery, Rebellion, and Living Death, U.S. Marines, travel writers, journalists, and academics encountered the zonbi during the U.S. occupation of Haiti from 1915–1934. They heard Haitians talk about it: the being who, even in death, could not return to lan guinée; the eternal slave who could never achieve freedom in Africa, in Heaven. Those ethnographers, amateur and professional, then exported the zonbi to the United States and sensationalized it. 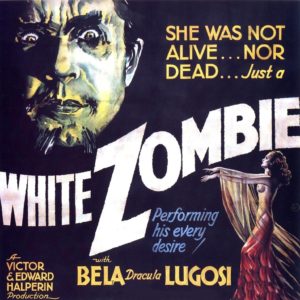 They created the foundations for movies like White Zombie (1932). That film features a Haitian “voodoo master” who turns an affluent white woman into a zombie at the behest of a white planter living in Haiti. Rather than centering the desire for freedom and autonomy at the heart of zonbi stories, it thus highlights the anxieties, prejudices, and desires of Depression-era white Americans. It also encouraged the further appropriation of the zonbi. Since the 1930s, U.S. filmmakers, artists, and authors have continued to divorce the zonbi from its origins in slavery and colonialism, instead re-incarnating it as the Anglo-American zombie.

To be sure, we live with the costs of this appropriation. Each Halloween, thousands of parents supervise trick-or-treaters dressed as brain-dead, flesh-devouring but ultimately fictional zombies. Each week, millions of viewers watch AMC’s The Walking Dead, a show that associates the zombie apocalypse with the collapse of Western capitalism and modernity. Few if any of those parents or viewers will give any attention to the zonbi who remain trapped on plantations across the U.S. South, unable to achieve freedom even in death.

Last Friday night, I paid $30 to take a ghost tour at one of the most famous of those plantations. In 1804, Andrew Jackson, then finishing a stint as a judge on Tennessee’s superior court, acquired the Hermitage, a 640-acre plantation located about ten miles outside of downtown Nashville. By the time of his death in 1845, Jackson added more than 400 additional acres to the plantation. He also held at least 150 of his enslaved people in bondage on it. Despite that fact, Jackson referred to the Hermitage as a “farm” throughout his life. Doing so enhanced his carefully crafted self-image as a “self-made man.” It obscured the reality that his wealth, like his country’s, was built on the labor of enslaved people rather than his own.

Given that history, it was unsurprising that our ghost tour began not with tales of hauntings but with nostalgia for Jackson. The tour started in the visitors’ center among displays that celebrated Jackson as the “people’s president” and an “American rockstar.” The tour guide, an elderly yet excitable white woman from Tennessee who I will call “Ethel,” continued to romanticize Jackson as we walked towards his mansion. According to her, the seventh President of the United States “fought for the middleman” and “made his wealth off of land.” He was exactly who her audience (I was the only person of color among the two-dozen guests) thought he was. That affinity between Hermitage interpretation and audience expectation became clear when the guide asked “What set Andrew Jackson apart?” The response from one middle-aged white woman was immediate: “He was just like anyone else!”

Still, even as audience and guide did their best to erase the Hermitage’s history of slavery, they exploited it, too. When we reached the mansion, the guide alternated between traditional Jackson mythology and tales of Hermitage hauntings. At one point, Ethel informed us that a particularly frightening haunting took place during the restoration of the Hermitage in the 1990s. Several members of the Ladies’ Hermitage Association, the group in charge of the restoration, were awakened in the middle of the night. They heard pots and pans rattling in the kitchen. They also heard chains rattling and dragging across the porch. Ethel did not explain who the culprits were. There was no need. Several blogs devoted to the paranormal including one that Ethel recommended confirm what is meant to be obvious: the Hermitage’s spirits are “former slaves” who “still walk [its] halls and grounds.”

The final stop of the ghost tour was the Jackson family cemetery. As our group stood on the walkway between it and Jackson’s tomb, Ethel told us one final ghost story. On crisp fall evenings, an unseen horse can be heard clip-clopping about the grounds. Jackson continues to ride. The story was a crowd-pleaser; the middle-aged white man wearing a shirt emblazoned with the Gadsden flag especially loved the idea of Jackson overseeing the Hermitage from beyond the grave. I did not, could not share his excitement. Instead, I pictured Jackson leering over his enslaved people from atop his horse. I wondered where they rested. Or if they did.

In The Half Has Never Been Told, historian Edward Baptist writes that “millions of people each year visit plantation homes where guides blather on about furniture and silverware” and obscure “the real purpose of these places, which was to make African Americans toil under the hot sun for the profit of the rest of the word.” Many will also hear those guides tell stories about ghosts. Historian Tiya Miles has chronicled the conspicuous place of enslaved African Americans in the “booming ghost-tourism industry.” In Savannah and Charleston, New Orleans and Nashville, visitors to plantations and homes hear guides talk in hushed tones about the spirits of enslaved people who once lived and worked in them. Rather than acknowledging that those ghosts are, as Miles asserts, “deadly serious messengers . . . that compel us to wrestle with . . . a past chained to colonialism, slavery, and patriarchy,” the guides reduce them to mischievous figures who rattle their chains for the amusement of guests. Under their guise, the enslaved can neither rest nor achieve freedom. They still toil for the good of the Hermitage and Jackson, the “self-made man.”

To tell the truth about the still-unfolding history of slavery is thus to unshackle enslaved people from this endless cycle of labor. But, to do the latter requires a reckoning of the true meaning and horror of the zonbi. It is not the CGI-ed creature of the silver screen or the eager trick-or-treater. It is not Felicia Felix-Mentor. Rather, the zonbi is a slave forever. It is the haunting specter of slavery and colonialism and capitalism, the searing indictment of our failure—our refusal—to grapple with the legacies and perpetuation of all three.