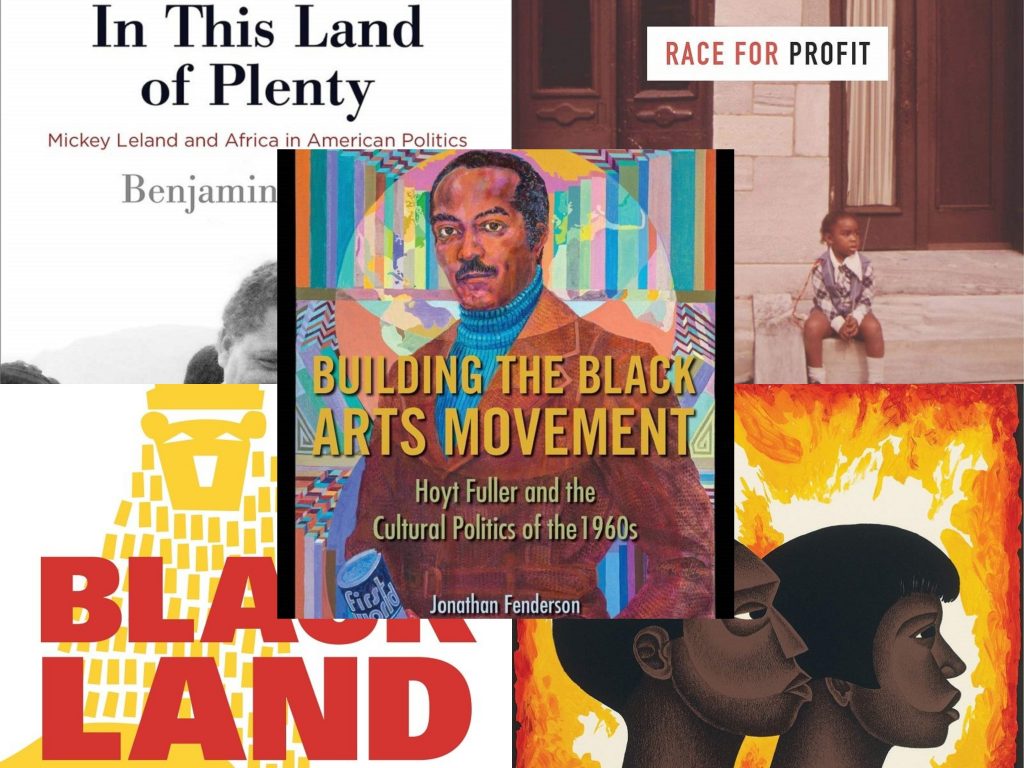 The African American Intellectual History Society (AAIHS) is pleased to announce the finalists for the third annual Pauli Murray Book Prize for the best book in Black intellectual history. Named after lawyer, author, and women’s rights activist-intellectual Pauli Murray, this prize recognizes the best book concerning Black intellectual history (broadly conceived) published between January 1, 2019 and December 31, 2019 by a member of AAIHS. The winner of the 2020 Pauli Murray Book Prize will receive $1,000, a featured week-long roundtable on the book in Black Perspectives, and a featured interview published in Black Perspectives.  The award winner will be announced at the 2020 AAIHS Conference, which will be held at the University of Texas at Austin from March 6-7, 2020. Here are the five finalists selected by this year’s fellowship committee.

Jelani M. Favors, Shelter in a Time of Storm: How Black Colleges Fostered Generations of Leadership and Activism (University of North Carolina Press, 2019) 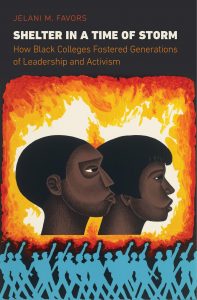 For generations, historically Black colleges and universities (HBCUs) have been essential institutions for the African American community. Their nurturing environments not only provided educational advancement but also catalyzed the Black freedom struggle, forever altering the political destiny of the United States. In this book, Jelani M. Favors offers a history of HBCUs from the 1837 founding of Cheyney State University to the present, told through the lens of how they fostered student activism. Favors chronicles the development and significance of HBCUs through stories from institutions such as Cheyney State University, Tougaloo College, Bennett College, Alabama State University, Jackson State University, Southern University, and North Carolina A&T. He demonstrates how HBCUs became a refuge during the oppression of the Jim Crow era and illustrates the central role their campus communities played during the civil rights and Black Power movements. Throughout this definitive history of how HBCUs became a vital seedbed for politicians, community leaders, reformers, and activists, Favors emphasizes what he calls an unwritten “second curriculum” at HBCUs, one that offered students a grounding in idealism, racial consciousness, and cultural nationalism.

Jonathan Fenderson, Building the Black Arts Movement: Hoyt Fuller and the Cultural Politics of the 1960s (University of Illinois Press, 2019) 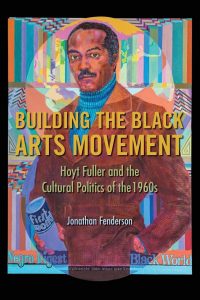 As both an activist and the dynamic editor of Negro Digest, Hoyt Fuller stood at the nexus of the Black Arts Movement and the broader black cultural politics of his time. Jonathan Fenderson uses historical snapshots of Fuller’s life and achievements to rethink the period and establish Fuller’s important role in laying the foundation for the movement. In telling Fuller’s story, Fenderson provides provocative new insights into the movement’s international dimensions, the ways the movement took shape at the local level, the impact of race and other factors, and the challenges—corporate, political, and personal—that Fuller and others faced in trying to build black institutions. An innovative study that approaches the movement from a historical perspective, Building the Black Arts Movement is a much-needed reassessment of the trajectory of African American culture over two explosive decades. 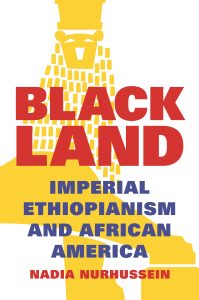 As the only African nation, with the exception of Liberia, to remain independent during the colonization of the continent, Ethiopia has long held significance for and captivated the imaginations of African Americans. In Black Land, Nadia Nurhussein delves into nineteenth- and twentieth-century African American artistic and journalistic depictions of Ethiopia, illuminating the increasing tensions and ironies behind cultural celebrations of an African country asserting itself as an imperial power. Nurhussein navigates texts by Walt Whitman, Paul Laurence Dunbar, Pauline Hopkins, Harry Dean, Langston Hughes, Claude McKay, George Schuyler, and others, alongside images and performances that show the intersection of African America with Ethiopia during historic political shifts. From a description of a notorious 1920 Star Order of Ethiopia flag-burning demonstration in Chicago to a discussion of the Ethiopian emperor Haile Selassie as Time magazine’s Man of the Year for 1935, Nurhussein illuminates the growing complications that modern Ethiopia posed for American writers and activists. American media coverage of the African nation exposed a clear contrast between the Pan-African ideal and the modern reality of Ethiopia as an antidemocratic imperialist state: Did Ethiopia represent the black nation of the future, or one of an inert and static past? Revising current understandings of black transnationalism, Black Land presents a well-rounded exploration of an era when Ethiopia’s presence in African American culture was at its height.

Benjamin Talton, In The Land of Plenty: Mickey Leland and Africa in American Politics (University of Pennsylvania Press) 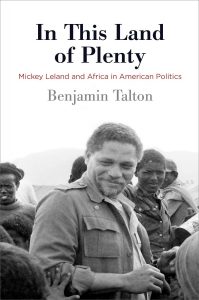 On August 7, 1989, Congressman Mickey Leland departed on a flight from Addis Ababa, with his thirteen-member delegation of Ethiopian and American relief workers and policy analysts, bound for Ethiopia’s border with Sudan. This was Leland’s seventh official humanitarian mission in his nearly decade-long drive to transform U.S. policies toward Africa to conform to his black internationalist vision of global cooperation, antiracism, and freedom from hunger. Leland’s flight never arrived at its destination. The plane crashed, with no survivors. When Leland embarked on that delegation, he was a forty-four-year-old, deeply charismatic, fiercely compassionate, black, radical American. He was also an elected Democratic representative of Houston’s largely African American and Latino Eighteenth Congressional District. Above all, he was a self-proclaimed “citizen of humanity.” Throughout the 1980s, Leland and a small group of former radical-activist African American colleagues inside and outside Congress exerted outsized influence to elevate Africa’s significance in American foreign affairs and to move the United States from its Cold War orientation toward a foreign policy devoted to humanitarianism, antiracism, and moral leadership. Their internationalism defined a new era of black political engagement with Africa. In This Land of Plenty presents Leland as the embodiment of larger currents in African American politics at the end of the twentieth century. But a sober look at his aspirations shows the successes and shortcomings of domestic radicalism and aspirations of politically neutral humanitarianism during the 1980s, and the extent to which the decade was a major turning point in U.S. relations with the African continent. 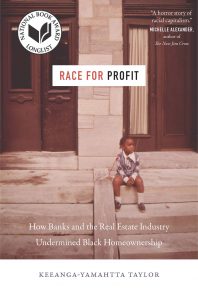 By the late 1960s and early 1970s, reeling from a wave of urban uprisings, politicians finally worked to end the practice of redlining. Reasoning that the turbulence could be calmed by turning Black city-dwellers into homeowners, they passed the Housing and Urban Development Act of 1968, and set about establishing policies to induce mortgage lenders and the real estate industry to treat Black homebuyers equally. The disaster that ensued revealed that racist exclusion had not been eradicated, but rather transmuted into a new phenomenon of predatory inclusion. Race for Profit uncovers how exploitative real estate practices continued well after housing discrimination was banned. The same racist structures and individuals remained intact after redlining’s end, and close relationships between regulators and the industry created incentives to ignore improprieties. Meanwhile, new policies meant to encourage low-income homeownership created new methods to exploit Black homeowners. The federal government guaranteed urban mortgages in an attempt to overcome resistance to lending to Black buyers – as if unprofitability, rather than racism, was the cause of housing segregation. Bankers, investors, and real estate agents took advantage of the perverse incentives, targeting the Black women most likely to fail to keep up their home payments and slip into foreclosure, multiplying their profits. As a result, by the end of the 1970s, the nation’s first programs to encourage Black homeownership ended with tens of thousands of foreclosures in Black communities across the country. The push to uplift Black homeownership had descended into a goldmine for realtors and mortgage lenders, and a ready-made cudgel for the champions of deregulation to wield against government intervention of any kind.