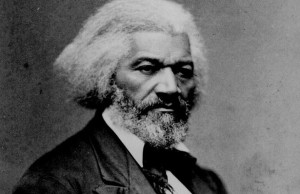 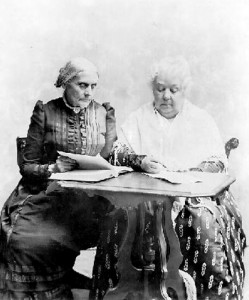 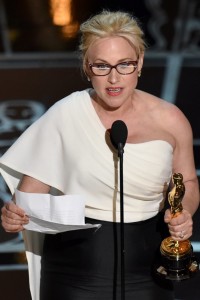 During the past week, Patricia Arquette’s comments during her Oscars acceptance speech have ignited debate across the internet. Arquette issued a rallying cry for equal pay for women, stating that women have done enough for everyone else; it’s time that gays and people of color support women. Her comments are problematic because they ignore the concept of intersectionality.[1] Arquette’s comments are also a manifestation of a long running conflict within the American women’s movement, the schism between white women of wealth and privilege, and women of color. Since March is women’s history month, it is appropriate in the midst of this controversy to step back and examine one of the earlier conflicts over this very issue, the fight over the fifteenth amendment. This conflict would pit longtime abolitionist and women’s rights activist Frederick Douglass against Elizabeth Cady Stanton and Susan B. Anthony.

During the beginning of Reconstruction, one of the key efforts on behalf of the African Americans was the securing of suffrage. Initially, abolitionists like Douglass, Stanton, and Anthony rallied behind the cause of universal suffrage so that both men and women, black and white, would be enfranchised. However, when the fourteenth amendment passed without a suffrage clause, the universal suffrage campaign was dropped in favor of a black male suffrage campaign. Stanton and Anthony vigorously opposed Black male suffrage. Their opposition would result in the severing of relationships with many of their black colleagues, especially Frederick Douglass.

Frederick Douglass described himself as a woman’s rights man. Douglass attended the landmark convention in Seneca Falls, New York in 1848 and signed the Declaration of Rights and Sentiments. He worked side by side with women abolitionists on numerous occasions. In the aftermath of the Civil War, he supported universal enfranchisement, but the brutal reality of Reconstruction forced him to reconsider his position. Douglass would support black male suffrage and the fifteenth amendment because he realized that without an amendment to guarantee suffrage for the black community, African Americans would lack any position or influence in the country’s political future. The initial years of Reconstruction saw numerous changes and reforms for African Americans. In essence, the momentum of the time was in the favor of African Americans. In the mind of Douglass and many others, this was the “Negro’s hour.” Douglass realized that if the change did not occur at this particular moment, it possibly would never happen.[2]

Douglass’s dedication to black male suffrage would not dampen his fervor for women’s rights. He maintained his dedication to the cause and participated in the American Equal Rights Association (AERA). The May 1869 meeting of AERA would prove to be the destruction of the organization. Most of the debate was over whether or not the organization should support the fifteenth amendment if it only referenced black men. Douglass argued that suffrage was needed for black men because they were being dragged from their homes and lynched. Someone in the audience would challenge Douglass stating that the same things were happening to black women; therefore, women needed the right to vote. Douglass’s response was that the ill-treatment of black women was not because they were women, but because they were black. In Douglass’s estimation, black women needed some form of representation for the racial violence and injustice inflicted upon them. In the midst of the tense debate, Douglass composed a compromise resolution which would welcome the fifteenth amendment and black male suffrage while also emphasizing their continued dedication to the creation of an amendment that would guarantee equal rights for all. Douglass’s proposal was endorsed by poet Frances Ellen Watkins Harper, but ignored by Stanton and Anthony.[3]

Stanton and Anthony fervently believed in their position. When black male suffrage became the focus of an enfranchisement amendment they shifted their tactics. Stanton would appeal to Democratic politicians by affirming their beliefs in black inferiority. In an 1868 editorial in her newspaper The Revolution she stated: “Think of Patrick and Sambo and Hans and Yung Tung who do not know the difference between a monarchy and a republic, who never read the Declaration of Independence or Webster’s spelling book, making laws for Lydia Maria Childs, Lucretia Mott, or Fanny Kemble.”[4] Her argument was that immigrants and blacks were uneducated and unqualified to vote while white women, of a certain class and privilege, were qualified. In another issue of The Revolution, when they listed reasons for opposition to the fifteenth amendment, they stated that it would result in women being dominated by inferior men. Ultimately, Stanton and Anthony would never agree with Douglass on this issue. The American Equal Rights Association was disbanded; the National Woman’s Suffrage Association was created to promote the Stanton – Anthony agenda.[5]

March is women’s history month. The rarely told fifteenth amendment conflict illuminates a long standing conflict in the women’s movement in this country, the denial of the diversity in the experiences of the American woman. The fifteenth amendment conflict is perhaps the most dubious aspect of the Stanton – Anthony legacy. Patricia Arquette’s statement, and its endorsement by people like Meryl Streep, promotes this legacy. A claim to advocate for equality while simultaneously ignoring the nuances of race, class, and gender perpetuates an elitist legacy. In the twenty first century this is a legacy we should leave behind.

[1] Intersectionality was a term created by Kimberlé Crenshaw in 1980s to address how different power structures interact in the lives of black women especially race and gender.

Comments on “Women’s History Month: The Legacy of the Fight over the 15th Amendment”