On October 4, 2016, Hurricane Matthew roared through Haiti’s southwest peninsula taking with it homes, centuries-old structures, and over 800 lives. In the storm’s wake, media outlets observed the undeniable damage of this specific natural event by projecting recycled, dehumanizing, and ahistorical narratives of Haiti to the world. In Why Haiti Needs New Narratives: A Post-Quake Chronicle, Haitian-born feminist anthropologist Gina Athena Ulysse writes: “if there is one thing we know for certain, it is that without destruction, sensationalism, and violence, there is no Haiti story.” Ulysse’s trilingual collection of essays is a balm to wounds that are reopened each time the black republic is (mis)represented. The book is a timely reminder of the need to critically interrogate the historical implications of this current moment.

Gina Athena Ulysse is a Professor of anthropology at Wesleyan University in CT. She is also the author of Downtown Ladies: Informal Commercial Importers, A Haitian Anthropologist and Self-Making in Jamaica (Chicago, 2008) and Because When God is too Busy: Haiti, me & THE WORLD (2017). Some of her performance works include: VooDooDoll What if Haiti Were A Woman: On Ti Travay Sou 21 Pwen Or An Alter(ed)native in Something Other Than Fiction, Contemplating Absences & Distances and Black Liberation MashUp.

Grace Sanders Johnson (GSJ): The introduction of Why Haiti Needs New Narratives powerfully depicts the production of public history in the media and the mechanics of intellectual work. You maintain that abstract and stereotypical perceptions of Haiti and the strategic erasure of nuanced narratives, leave Haiti “rhetorically and symbolically incarcerated” in simplicity. How does the book help us address your provocative question, “Who is studying you, studying us?” 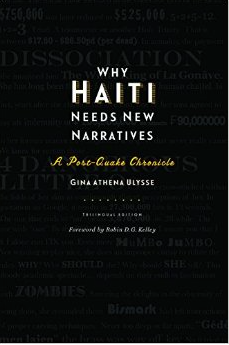 Gina Athena Ulysse (GAU):  Representation in the public sphere is about the management of specificity. This need to keep “Others” or anything that is not normative in designated categories is part of a broader project to maintain the capitalist order of things.  Narratives of Haiti always come back to a single question: How did the enfant terrible of the Americas (who militarily defied European powers, expanded notions of freedom and humanity, and created the disorder of colonialism) become the world’s bête noire? If we meditate on these “firsts” (only successful slave revolution, the first black republic), Haiti was the avant-garde! (Shout out to Anténor Firmin here). What did being the avant-garde cost? Of course, Blackness has to be demonized. The sanctity of whiteness depended on it to prevail. Hence, the “bloody” revolution and not the barbarism and cruelty of slavery. The enslaved were the brutes, not the colonialists, and so on… In a sense, Haiti is symbolic of blackness globally. As the late anthropologist, Michel-Rolph Trouillot rightfully stated “the more that Haiti appears weird, the easier it is to forget that it is the longest neocolonial experiment in the history of the West.” This is evident in the value ascribed to (some) Haitian lives in the country itself, the Dominican Republic and the United Nations (#UNCholeraAccountability), for example.

I just returned from an amazing conference at Smith College in honor of historian Paula Giddings. The keynote was a conversation on #BlackLivesMatter with Janaya Khan, Opal Tometi and Barbara Ransby. I would be grossly remiss to ignore obvious connections.  The misrepresentations of Blackness and Black bodies here and elsewhere are akin to the distortion of Haiti.  Still to your point, it is crucial we pluralize “the media.” While some journalists have acute sensibilities to cultural analysis and history that shape their thinking, most do not. Historically, Haiti has been marked by specific tags, which reinforce antiquated ideas in popular imagination that ultimately serve particular racialized and geopolitical purposes. As a public anthropology project, this was an opportunity to return the gaze onto the media-industrial-complex, if you will.

GSJ: Historically Haitian feminists have produced their texts in multiple languages and in collaboration with other women. What is the significance of translation in the book?

GAU: This project made me understand how translation is a social justice issue. Haitians, as the subjects of this work had to have access to it and be able to read it. We sought translators with feminist sensibilities who were based in Haiti. Writer Évelyne Trouillot and professor Nadève Ménard were a dream team. They gave me something I thought I lost– my voice in languages fundamental to my formation. Reading them was highly emotional.

GSJ: You argue that new narratives are not simply necessary for the purpose of historical nuance or rebuttal, but that these also inform action, policy, lived experience and the ability to historically and contemporarily imagine new relationships with and in Haiti. How are you imagining, experiencing and documenting this current moment?

GAU: I am not Grace. My heart is all mangled. I am somewhat incapacitated by an all too knowing fear of what looms ahead. What happens when the cameras retreat after the sensational breaking news and poverty porn? I haven’t written anything. I hate to say just take the book, scratch out the word earthquake and put hurricane Matthew. The script is getting re-staged again. The destruction. The absence of infrastructure. The incessant use of “poorest nation in the western hemisphere,” which poet Jean Claude Martineau dubbed Haiti’s famous last name.  Nou rete nap gade, as the saying goes. We wait and watch.  The Sisyphean narrative works yet limits our perception by disregarding the significance of capital, geopolitics and social history. Nonetheless, this is a turning point in the public discussion of Haiti. More is being said in nuanced ways as Haiti demands we confront our relationship to the past. With social media, folks are responding quickly to the ignorance out there. Scholars are active in fundraising campaigns, and The Guardian editorial called for reparations recently.  That was an unexpected and overdue conversation.

GSJ: An important project of black women’s intellectual history is understanding the modes of expression and the conditions under which ideas are produced. Throughout the book you chronicle the fragile co-existence of grief, sadness, and humor. At another moment you write, “Wailing is my chosen method of intervention.” Can you say more about this?

GAU: My wailing happens on the stage as I confront the visceral that is embedded in the structural. No subject lives their life along disciplinary lines. My inclination is to experiment toward a Rasanblaj of fragments and integrate an historically split subject or fractured being of empire. I’m always searching in places where bits of selves have been strewn. Much can be culled from fiction, policy papers, secondary accounts, archives and visual or sonic art. As an interdisciplinary feminist methodologist, I make what I call Post-Zora Interventions—work on the borders of anthropology, art and activism that traces its intellectual lineage to Zora Neale Hurston’s avant-garde propensity to blur or messes with genres, complicated relationship with the academy, and her staunch pursuit of individuation. Performance, as anthropological method and practice, allows the space to create different modalities of inquiry and engagement to produce intertextual knowledge. In turbulent times, expression is desperately needed to break silences, which brings me to Suzanne Césaire, “It is now urgent to dare to know oneself, to dare to confess to oneself what one is, to dare to ask oneself what one wants to be.”

GSJ: The last line of the book reads: “From this point on, I knew, at least for now, I would stop insisting that Haiti needs new narratives […] without apologies, I would simply do it.” Who did you commune with (in the spirit and in the flesh) to produce this work?

GAU: My call for new narratives is admittance that we have little clue of the old ones and are much too damned invested in clichés. Once one accepts that academia also traffics in epistemic violence, a decision is needed to rectify what your individual relationship will be to that awareness.  I have been honest about my commitments, hence my full embrace performance.   Simply doing it, meant working without attachment to linearity and surrendering to my dadaist and surrealist tendencies. I am drawn to anything that broadens the conversation and unearths what otherwise stays unknown. My muses included Suzanne and Aimé Césaire and Carl Jung and a number of artists, historians, and writers in the Black diaspora. My grandmother’s Gede spirit remains inspiration, always present saying F this. There is too much at stake. So many people died and are dying from Matthew, cholera, hunger and thirst. Let me amend something I wrote in 2010: Nothing would be a more fitting requiem for the dead and dying than a sustainable Haiti that will not crumble again in the future from the man-made disasters ahead. For many Haitians, what the country needs now is solidarity not charity.

Grace L. Sanders Johnson is an Assistant Professor in the Department of Africana Studies at the University of Pennsylvania. She is a historian of gender, the Caribbean, and twentieth century Haitian women’s intellectual thought.

Comments on “Why Haiti Needs New Narratives: An Interview with Gina Athena Ulysse”