The transatlantic slave trade, which endured for over 400 years, stitched together disparate, and as Sharla Fett reminds us, often incommensurable worlds. In Recaptured Africans: Surviving Slave Ships, Detention, and Dislocation in the Final Years of the Slave Trade Fett traces the devastating odyssey made by 1,800 African “recaptives” on four intercepted slaving vessels—the Echo, the William, the Wildfire and the Bogota—between 1858 and 1860. Fett follows them through every stage of their journey, from the deprivation of detention in the pro-slavery American ports of Charleston and Key West to resettlement and tentative community building in colonial Liberia. In the process, the worlds of the predominantly adolescent recaptives from Kikongo, Yoruba, and Fon speaking Western Africa touched those of Cuban slaving merchants, Southern planters, African-American abolitionists, and U.S. officials and journalists.

Fett eschews the terms “emancipated” or “liberated” that have been favored by other historians to describe African survivors removed from the holds of illegal voyages during the era of slave trade suppression. Rather, Fett illuminates these men, women and children’s liminality, loss, suffering and mortality in the face of the “breaking and remaking of their social worlds many times over” (8). Here, Fett draws from a rich literature on slavery and social death in Africa to demonstrate how enslavement and transatlantic displacement represented a profound existential rupture for those unlucky enough to be ensnared in the slave trade. The dissolution of social and kinship ties that accompanied transatlantic passage led to the death of the self—as an inherently socially imbedded entity—setting off a cascading process of perpetual insecurity and isolation.

Key to Fett’s analysis is the clear continuities she draws between slavery and “receptivity,” troubling triumphalist narratives of liberation. Federal authorities held recaptives, like the enslaved, in stifling, unsanitary ship holds, even as they faced mounting morbidity. On the Echo for instance, one third of all Africans perished during the period between naval apprehension in Caribbean waters and arrival in Charleston, South Carolina. Recaptives’ carceral state continued once they arrived in American ports, where the survivors of the Echo faced highly regulated routines and continued confinement in an improvised camp—called the “African Depot.” Echoing the work of Stephanie Camp, Fett identifies “constrained movement” as a key mode of racialized control over the enslaved as well as the recaptive. Brought under the auspices of federal protection after their capture on illegal Caribbean slaving vessels, Fett emphasizes the “conflicting representational claims made on the bodies” of African recaptives while in the U.S. (4). Such claims exemplified the ambiguity of their legal and social status; were they to be fungible commodities, persons in law, or slave trade refugees? Their status remained an issue of contention not only for the recaptives themselves, but also for pro-and anti-slavery political factions within the U.S.

While confined, recaptives became a cause célèbre for counterrevolutionary Charlestonians who wished to extend their slave-holding rights beyond the boundaries of the nation. As slave trade revivalists challenged the constitutionality of the 1820 piracy law which allowed for the federal seizure of illegal slaving ships, a steady stream of visitors, often drawn from the well-heeled, slave-holding class arrived at Fort Sumpter to inspect young recaptives, many of whom were emaciated and ailing from the transatlantic voyage. White spectators were invited to commodify and objectify recaptives by witnessing firsthand the “purest Negro type,” representative of the “Congo tribe” (59). Echoing Katherine McKittrick’s analysis of the slave auction block as a site of racialization and sexualization, the physical space of federal detention camps produced powerful meanings for a white American viewership. The bodily spectacle of recaptives who came face to face with eager white elites conveyed, as Fett argues, racial inferiority, barbarity, and African incapacity. These constructions were then circulated in print media, justifying pro-slavery and imperial political claims, while solidifying a discourse of ethnographic voyeurism.

African-American abolitionists such as James W.C. Pennington, however, challenged the scientific racism which underlay these characterizations. In response, Pennington drew on the powerful image of suffering African recaptives to demand racial justice and articulate a more expansive, human rights-oriented egalitarianism. Despite Pennington’s advocacy, ultimately neither slavery’s supporters or its foes believed that the African recaptives should remain within the U.S. and be absorbed into the body politic. 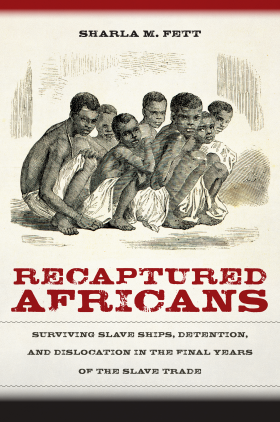 Beyond their American defenders, recaptives themselves continually worked to repair the damage of their extended captivity—which threatened both social and physical death. As Fett highlights, their physical ordeal was in some ways less threatening than their existential one, and healing (both social and corporeal) in the face of deprivation generated a “politics of struggle” which worked defy the ravages of serial displacement (10). Drawing on her exceptional analysis in Working Cures: Health, Healing and Power on Southern Slave Plantations, Fett demonstrates that recaptives drew on rich Western African communal healing traditions to confront everyday horrors. As federal authorities transported African recaptives to Liberia to join a fledgling American colony, they encountered continual threats to their health. A particular strength of Recaptive Africans is in reconstructing these moments of community mobilization. In one particularly compelling episode, Bomba, alongside a group of recaptive women nursed an ailing shipmate after a miscarriage, disregarding the admonishments of a white male doctor. On the same voyage, Bomba lead an improvised death rite for a young recaptive who had suddenly fallen ill, tearing a piece of clothing into strips and binding the 16-year-old girl’s wrists. Such rituals fostered collective understandings of death itself, guaranteeing that the deceased were recognized and protected during their final passage. As Fett points out, binding existed in many parts of Western Africa as a form of activation and invocation of the power of the ancestors and natural spirits (144). Such healing work revealed the extent to which African derived therapeutic techniques survived the middle passage.

Such moments did not always revolve around death. On another voyage a recaptive West African woman carefully improvised a tattoo for a female shipmate’s arm, delicately making incisions in a specific, meaningful pattern unrecognizable to the American official who observed the moment. Such markings beautified their wearer while signifying familial, communal or ethnic affiliations. However, Recaptive Africans does not explore other possible purposes of such bodily modification. One question left unexplored is the reason recaptive women began to transform their bodies in the immediate wake of their American detention, and before they had resettled and built new social ties.

These episodes raise a number of questions, about African cultural expression in the wake of enslavement, about the nature of community building, and the salience of African female leadership in times of communal crisis. They also potentially reveal a nascent female African diasporic intellectual tradition—one which conceptualized power and corporeal sanctity in completely different ways than white male American medical practitioners did. Fett’s inventive use of American shipboard personnel’s observations of African recaptives provides a rich but ambiguous set of primary sources to illuminate their agency and perspectives. These second-hand accounts were riven with racist bias, but provide greater documentation of the intricacies of shipboard life than is available for earlier periods of the slave trade.

Recaptive Africans contextualizes these lived experiences of vulnerability within a moment of intense political, economic and social reorganization that characterized Atlantic slavery in the mid-nineteenth century. Narrow in temporal scope, Recaptive Africans expertly renders the transnational nature of anti-slavery debates and flows of global capital that defined the period of “second slavery.”1 Decades after a wave of liberal revolutions had swept the Atlantic world, this later period of Atlantic slavery was defined by the intertwined nature of free and slave labor economies, as bonded labor in Brazil, Cuba and the U.S. South fed growing consumer demands for coffee, cotton and sugar in the ostensibly free northern U.S. and Europe.  Despite legal prohibitions on the transatlantic slave trade which had first arisen in 1807, during the period of the illegal trade an estimated 1.3 million enslaved Africans were trafficked to American ports because of unprecedented market expansion across the Atlantic world. The dramatic growth of the slave trade in the nineteenth century was a result, in no small part, to the spread of industrial capitalism—and its reliance on commodities produced by unfree labor. Fett’s narrative effectively captures the moment of slavery’s intensification and expansion, which required greater productivity by enslaved workers and growing numbers of human bodies subjected to forced captivity even as slavery itself was increasingly seen as contrary to modern, civilized liberal values. Recaptured Africans illustrates these contradictions well, demonstrating how once the transatlantic slave trade became a well-oiled capitalist machine the enslaved faced ever greater levels of dehumanization.

Recaptive Africans joins a growing literature on this particular period of the slave trade, most of which focuses on the hotbeds of slave activity in Cuba, West Africa, and Brazil, with fewer works on the illegal slave trade in the American context.2 Though a number of scholars have produced social histories of resettled recaptive African communities, few have explored the immediate aftermath of the seizure of illegal slaving vessels.3 Using a range of journalistic and administrative sources, Fett deftly paints a detailed and empathetic portrait of life under “receptivity.” Weaving together a rich transnational scholarship on African life between continents, Recaptive Africans builds on and extends recent literature on the unique nature of the final decades of Atlantic slavery.

Mary E. Hicks is Assistant Professor of Black Studies and History at Amherst College. Her current research examines the maritime dimensions of the African Diaspora, with a particular focus on eighteenth and early nineteenth century Colonial Brazil. More broadly, her research seeks to interrogate the multiplicity of connections between coastal West Africa and Brazil through the lens of mutual cultural, technological, commercial, intellectual and environmental influences. Follow her on Twitter @DrMaryHicks.