This post is part of my blog series that announces the publication of selected new books in African American History and African Diaspora Studies. Today is the official release date for Women in the World of Frederick Douglass, published by Oxford University Press.

The author of Women in the World of Frederick Douglass is Leigh Fought. Professor Fought is an associate professor of history at Le Moyne College in Syracuse, New York. She was an associate editor on the first volume of Frederick Douglass’s correspondence at the Frederick Douglass Papers, published by Yale University Press in 2009. Her previous books includes Southern Womanhood and Slavery: A Biography of Louisa McCord (University of Missouri Press, 2003) and Mystic, Connecticut: From Pequot Village to Tourist Town (History Press, 2006). Professor Fought earned her Ph.D. in U.S. history from the University of Houston and a Master of Library Science degree from Simmons College in Boston. 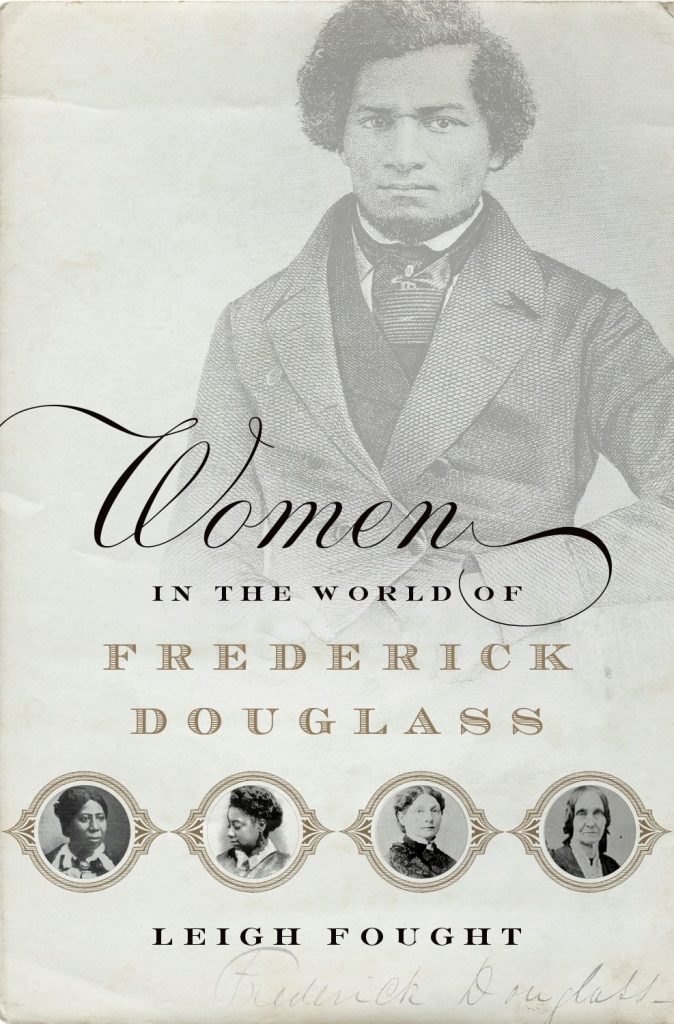 In his extensive writings, Frederick Douglass revealed little about his private life. His famous autobiographies present him overcoming unimaginable trials to gain his freedom and establish his identity—all in service to his public role as an abolitionist. But in both the public and domestic spheres, Douglass relied on a complicated array of relationships with women: white and black, slave-mistresses and family, political collaborators and intellectual companions, wives and daughters. The great man needed them throughout a turbulent life that was never so linear and self-made as he often wished to portray it.

In Women in the World of Frederick Douglass, Leigh Fought illuminates the life of the famed abolitionist off the public stage. She begins with the women he knew during his life as a slave: his mother, from whom he was separated; his grandmother, who raised him; his slave mistresses, including the one who taught him how to read; and his first wife, Anna Murray, a free woman who helped him escape to freedom and managed the household that allowed him to build his career. Fought examines Douglass’s varied relationships with white women—including Maria Weston Chapman, Julia Griffiths, Elizabeth Cady Stanton, and Ottilie Assing—who were crucial to the success of his newspapers, were active in the antislavery and women’s movements, and promoted his work nationally and internationally. She also considers Douglass’s relationship with his daughter Rosetta, who symbolized her parents’ middle class prominence but was caught navigating between their public and private worlds. Late in life, Douglass remarried to a white woman, Helen Pitts, who preserved his papers, home, and legacy for history.

By examining the circle of women around Frederick Douglass, this work brings these figures into sharper focus and reveals a fuller and more complex image of the self-proclaimed “woman’s rights man.”

In this well-researched and richly textured book, Leigh Fought gives us a fascinating new view into the life and times of one our most famous and revered figures: Frederick Douglass. As he freely acknowledged, women helped make Douglass the man he became. So we, too, are in debt to the women whose stories come so vividly alive in these pages.”—Annette Gordon-Reed, author of The Hemingses of Monticello: An American Family

Ibram X. Kendi: What are the principle findings or arguments of the book? What do you hope readers take away from reading it?

Leigh Fought: Frederick Douglass would not have become one of the greatest black activists of the nineteenth century without the work of women. This was not the cliché “behind every great man is a woman.” Women played a central role in his intellectual development, his independence as a man and activist, his economic well-being, his challenge to racial stereotypes and prohibitions, and the persistence of his place in history.

When I started this project, I was simply interested in finding more about all of these women who seemed as fascinated by Douglass as I was, except that they actually knew him. I also thought that the project would be synthetic. As it turned out, others had expressed little curiosity about most of the women themselves, with the exception of those women who merited their own biographies. Then, as I began to reconstruct the lives of the women from original research in order to explain their interaction with Douglass, I began to see a feminine space around him, much like the concept of a “negative space” in art. That feminine space, like most feminine spaces, was where the real action took place. If you want to know about a life, that is the place you have to investigate.

In Women in the World of Frederick Douglass, readers will meet a host of fascinating, resourceful women, some of whom might otherwise remain footnotes. The women featured in this book had the most dramatic influence on Douglass’s life, but they also had their own agendas and contexts that explain the ebb and flow of their relationships with Douglass, as well as his respect for or sympathy with them. The abuse suffered by slave women and the capitulation of white women to the institution of slavery shaped his childhood, laying the foundation for the man he became. In his adulthood, each woman at some point formed a partnership with Douglass to advance a cause against racism that extended beyond abolition and the end of slavery. His relationships with all of these women exposed the variety of ways that gender and race were employed as tools of oppression. At the same time, he and they mobilized their resistance along those very same lines. While the story of women in Douglass’s world does not preclude other actors or influences in his life, by bringing them into focus their biographies add nuance and deeper understanding to his.

Comments on “The “Woman’s Rights” Man: A New Book on Women in Frederick Douglass’s World”