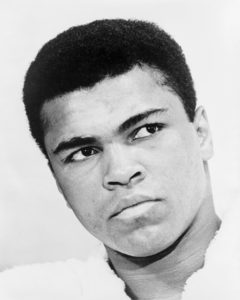 Muhammad Ali was reborn at least twice. The first rebirth was his conversion, in the 1960s, to Islam (initially through the heterodoxy of the Nation of Islam; then through Sunni Islam, a more universal version of the faith). Another rebirth of sorts occurred in the 1980s and 90s, when the aging champion, increasingly enfeebled by Parkinson’s, was reclaimed by white America and the corporate establishment. This later reincarnation was less a feat of reconciliation than it was an act of willful amnesia. Once viewed by the American mainstream as a traitor and a loudmouth extremist, Ali was recast as an American talisman, a symbol of racial harmony and national greatness.

That reinterpretation was consummated earlier this month in the wake of Ali’s death, at age 74, from complications related to his chronic disease. The fighter was eulogized as an emblem of grace and courage, an ambassador of American values who transcended sport and race. His defiance of the Vietnam-era draft was presented as an individual expression of conscience rather than as a repudiation of the U.S. quest for global domination (a disgraceful act of insubordination in the view of much of the American public at the time). Amid the chorus of recent tributes to Ali’s life, the former heavyweight’s brazen black nationalism and his political and religious rejection of Western militarism, materialism, and white supremacy were glossed over or simply ignored.

Ali, we must acknowledge, played a supporting part in the mainstreaming of his own image, especially through his role as a television pitchman and, in his retirement years, an occasional supporter of political elites (including Reagan). But the repackaging of the boxer’s life also belongs to a larger pattern of appropriation of 1960s dissidents by the ruling class. 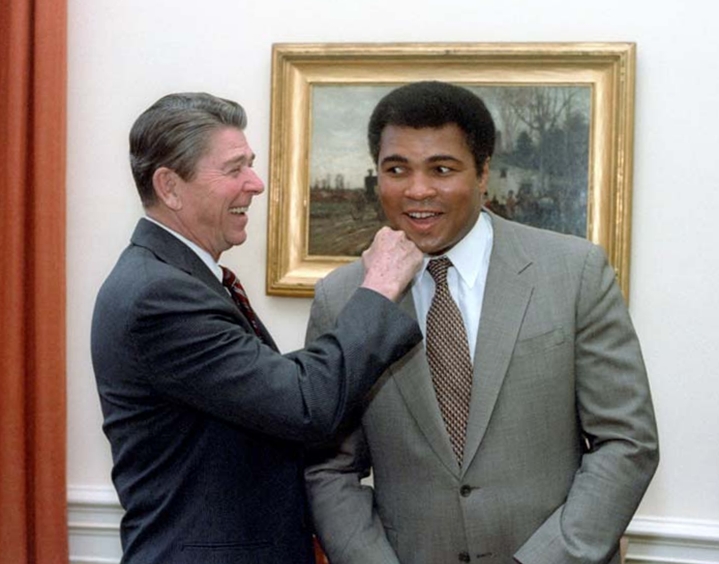 Elite power has always claimed the right to rescript the past. Manipulating the historical record is an essential means of justifying and reinforcing the prevailing order. To this day, schoolchildren are taught that the founding of the United States is a story of liberty and progress rather than a chronology of genocide and slavery.

For those seeking to maintain the current arrangements of power, controlling the narrative of the 1960s is especially crucial. The social movements of that era generated such a profound “crisis of governability” that their subversive potential lingers, in some ways, to this day. Reestablishing the legitimacy of bourgeois western democracy in the wake of the period’s mass struggles was a major priority for the state and the corporate establishment. The trick was to incorporate elements of popular demands for justice while preserving the sanctity of private property and profit. In short, the quest for racial justice had to be absorbed into the mythology of American exceptionalism.

As it happened, granting Martin Luther King, Jr. and Rosa Parks retroactive approbation actually helped contain the freedom movement’s militant challenges to white supremacy, war, and accumulated wealth. Liberal accounts of postwar America portrayed black struggles as more or less welcome extensions of the nation’s egalitarian creed. According to these tales, the “end of history” ushered in by the late 20th century had witnessed a double triumph: decisive victory over U.S. adversaries abroad and substantial fulfillment of the aspirations of minorities at home. The moral of this master narrative was clear: the American system possessed all the requisite mechanisms of enlightened social reform. Revolution was both futile and unnecessary. 1

Of course, the integration of 1960s insurgencies into the “common sense” of capitalism poses a serious challenge for radical historians. The distortion or erasure of traditions of black dissent from the American political consensus contributes to what critic Henry A. Giroux calls “the violence of organized forgetting.” Without a critical historical consciousness, the exploited become passive consumers of a body of ideas designed to serve the interests of capital. Their capacity to think independently, to analyze their objective circumstances, and to confront the reigning structures of power is severely constrained. 2

If we are to help revive the radical imagination, all progressive educators, from primary school teachers to college instructors, must prepare their students to grapple with “the political uses of the past.” Young people and the oppressed must come to understand history as a battlefield, as an act of both recuperation and popular resistance. They must learn to reject the reduction of social movements to individualist narratives of charisma and diplomacy. They must learn to think scientifically, to craft and enact theories of social change not sanctioned by ruling elites. And they must learn narratives of struggle that remain as insurrectionary and unrepentant as Ali was in his prime. 3

Comments on “The Taming of Muhammad Ali”