loading...
By Ashley Farmer February 17, 2015 Comments Off on Rosa Parks, Radicalism, and Remembrance

Its Black History Month, which means that mainstream society pulls out the iconic images of African American freedom fighters including Rosa Parks. Mrs. Parks provides an interesting case study in how we commemorate African American history. She is frozen in our collective consciousness as older, respectable woman who, “had been pushed around all her life” and wasn’t going to take it anymore. Indeed, the moment that Mrs. Parks “decided” not to relinquish her seat on a Montgomery bus has become the symbol of the triumph of the black spirit over white supremacy. This moment, as Parks’s biographer Jeanne Theoharis noted, has become a “narrative of national redemption” in which the country portrays Parks as “an accidental midwife without a larger politics.” [1]

Indeed, Mrs. Parks led a textured activist life that has been largely hidden from public view. This is due, in part, to the fact the her papers (manuscripts, photos, etc.) have been caught up in “controversies around profit, control, and the use of her image.” Parks, in an effort to tell her story to future generations, donated many of her personal correspondences, letters, and memorabilia before her death. The collection, priced 6 to 10 million dollars in 2013, sat in storage because most institutions, particularly those that collect black history, could not afford to purchase it.[2] All the more remarkable then, that the public will be able to view Park’s archive this year at the Library of Congress. [3]

Howard Buffett, Warren Buffett’s son, heard about the papers and instructed his foundation to make what would become the winning bid for the collection. The foundation will loan the Parks papers to Library of Congress for ten years.[4] With the 1,500-item collection now publicly available, we will finally get a chance to hear Parks’s thoughts on her community, race relations, and politics. African American women are rarely the subjects of histories. And often, like Parks, we are only represented in a particular historical moment or one dimension of black struggle. For African Americans, access to Parks’s papers is a chance to see our history formally appreciated in the archive, an experience that is still all too rare.

The physical location of Parks’s papers is just as important as how they became available to the public. Housing her papers at a national, government sanctioned and sponsored archive, can represent a moment of national celebration and validation of black struggle. It can also reinforce state-sponsored narratives of black progress. The Library of Congress will incorporate some pieces from the collection in a exhibit called “The Civil Rights Act of 1964: A Long Struggle for Freedom.” From the title, it appears that Parks will be featured as a key figure in our collective and inevitable march towards achieving the liberal integrated American dream. The aspects of her life that don’t fit into this linear story line – her training at the Highlander Folk School, her criticism of gradualism in the black freedom struggle, her assertion that Malcolm X was her hero – recede from public view.[5] In the very moment that we celebrate the opening up of Parks’s remarkable life, the place in which we house her history possibly forecloses dynamic perceptions of her activism.

Parks’s importance in our national history and her critical role in the black freedom struggle cannot be disputed. But what is gained and lost by white control over the Parks collection and our ability to access her thoughts, ideas, and worldview through a repository designed to foster a national identity? Are we able to collectively shift our understanding her ideas, intellectual development and activist trajectory while encountering her within the walls of an institution invested in a particular narrative of her life? And, if a foundation has the ability to buy, sell, and lend Parks’s legacy as it sees fit, how do we understand the intersection of capitalism, black history, and the valuation of black life today? I don’t have the answers to these questions. And, last month, I argued that we need all the documentation of African American women’s lives that we can get. But if Black History Month is about remembering and celebrating African Americans, their achievements, and their contributions, we should also think about where the national remembering is taking place and who is deploying the images and narratives of remembrance. 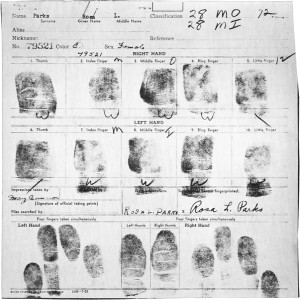 The public can access Parks’s papers at the same moment in which African American women are leading Black Lives Matter protests and when activists are (again) asserting that black life, past, present, and future, is valuable. Parks’s archive and the histories that develop from it are linked to this struggle. Not only because Parks was more radical than our collective consciousness allows. But also because, through Parks, we can better understand how African American women engage in liberation politics, how respectability politics shapes black women’s lives and choices, and how she was one of the many African American women who have consistently worked at the grassroots level to assert the value of black life and humanity.

Parks’s role in the civil rights movement was no more spontaneous than contemporary protests. Both are part of a long, rich history of African American women activists who consistently fight the intersection of racism, capitalism, and heteropatriarchy. Its time we recognize and remember Parks for her methodical dedicated radical activism as much as for her movement symbolism and no longer let institutions and foundations frame black struggle as individualist, respectable, progressive, male-centered, and “accidental.”[6] This seems to be a good use of the short time we have access to Parks’s archive in the short month dedicated to black history.

[6] Theoharis has developed a body of literature intent on reframing Parks. See: The Rebellious Life of Mrs. Rosa Parks and ““A Life History of Being Rebellious: The Radicalism of Rosa Parks,” in Dayo Gore, Jeanne Theoharis, and Komozi Woodard Want to Start a Revolution? Radical Women in the Black Freedom Struggle (New York: New York University Press, 2009).