The field of Middle Passage Studies comprises, as Sowande’ Mustakeem notes, a “small yet growing body of scholarship” dedicated to excavating histories of slavery from within the “wooden world” of the slave ship (p. 4). Mustakeem joins renowned scholars contributing to this harrowing and necessary intellectual enterprise–from Stephanie Smallwood and Marcus Rediker, to Emma Christopher and Eric Taylor.

Histories produced in the field of Middle Passages Studies follow a particular method. These histories view the Atlantic ocean as a site of violence and commodification, but also a site with a history. Slave ships, in this analysis, become more than ocean-going vessels. Slave ships become technological innovations, carceral spaces, and extensions of a project of transforming, un-gendering, and re-quantifying human beings into objects for sale. Marcus Rediker described the slave ship as “a strange and potent combination of war machine, mobile prison, and factory.” Everyone on board, from captains to crew to African captives themselves, played active roles creating or resisting the dismantling terror of the Middle Passage.

Middle Passage Studies scholars push the field of slavery studies to examine the individual and collective experiences of sailors and slaves, investors and merchants, Africans on shore at factories and ports along the Atlantic African littoral, and Africans in the ports and slaveholding societies of the Americas. The network of slaving invoked in Middle Passage Studies reveals how the slave trade “filtered within and beyond the ocean, irrevocably transforming bondpeople’s lives as well as the societies and communities into which they were imported” (p. 7). 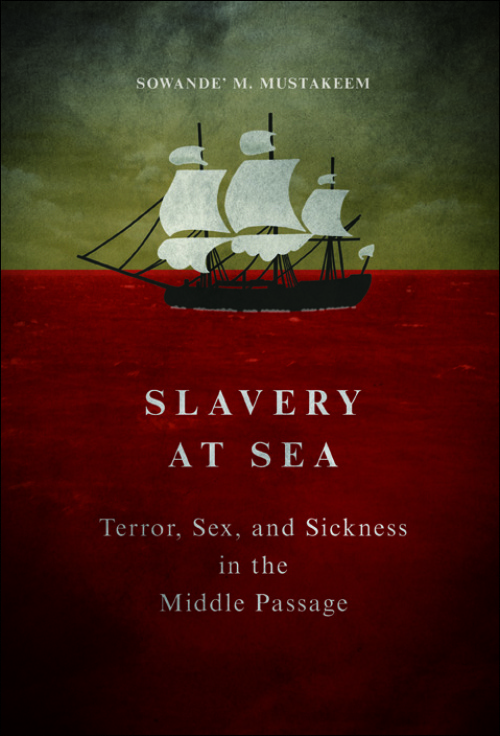 Mustakeem’s Slavery at Sea: Terror, Sex, and Sickness in the Middle Passage does all of this work and more. In Slavery at Sea, Mustakeem breaks down the constituent elements of the slave trading enterprise, demystifying economic strategy and outlining the tremendous amount of activity behind a lucrative, dangerous, and ultimately paradigm-shifting enterprise. Using a range of sources, from sailors personal diaries to merchants correspondence to financial ledgers, Slavery at Sea makes three key contributions to the study of slavery.

First, Mustakeem meticulously traces Africans’ own experience of “unmaking” as women, children, and men found themselves captive and “warehoused” at ports, factories, and trading outposts on the continent itself. In this, Slavery at Sea is reminiscent of Michael Gomez’s iconic study, Exchanging Our Country Marks, which demanded that scholars move the study of African American, African diaspora, and slave trade histories from the port of origin on the coast to the “point of capture” within West and West Central African societies on the continent itself.

Second, Mustakeem deepens our understanding of the logistics of transporting Africans and the role of every individual involved. From the directives issued by investors and merchants, to the discipline rendered by ship captains over captives and crew, to surgeons charged with keeping the enslaved alive long enough to land in the Americas, Slavery at Sea reminds readers that everyone was implicated in maintaining a

dramatic climate of terror in the world of slavery at sea that resulted in mental disorientation, familial and communal separation, malnourishment, lack of sanitation and cleanliness, severe isolation, debilitating diseases, miscarriages, sexual abuse, psychological instability, and bearing witness to physical violence committed against kin and shipmates.

Third, Mustakeem details the experience of Africans across gender, age, and ability. Digital and quantitative histories of the Atlantic slave trade have been critical to uncovering and recovering flows of slave ships to and from societies on either side of the Atlantic. These histories show that the majority of slaves transported along any given route were often male (adults and non-adults). However, the numerical preponderance of African males (men and boys) in the trade should not take precedence or obscure the devastating consequences the Middle Passage had on pregnant women, children, the elderly, and those with limited mobility. Offering readers a micro-historical lens, Mustakeem decenters the black male body, offering us a history of the Middle Passage where enslavers refused to be lenient on either gender or forgive disability. As a result, Africans arriving in the Americas underwent an experience whose damage would continue to be felt in the physical, mental, nutritional, and gynecological wellness of Afro-Atlantic communities on the other side of the Atlantic.

Mustakeem’s Slavery at Sea made me reflect on the moral challenge of studying slavery and the slave trade. It is difficult to read her work and not be reminded that the best scholarship on slavery asks difficult questions about complicity in the face of injustice, which violences we are willing to see or ‘unsee,’ and our overall commitment to an ethos of social justice, liberation, and abolition. Since 1896, with the publication of W. E. B. DuBois’s The Suppression of the African Slave Trade to the United States of America to 2016 with the release of Christina Sharpe’s In the Wake: On Blackness and Being, this work explores and exposes the human agency and action required to make systems of oppression function. Slavery at Sea joins a body of work asking extremely hard questions about what survival means in a Middle Passage context.

The contributors to this forum share this concern and preoccupation with exploring what is at stake when we research, write, teach, read, and organize with histories of slavery and the slave trade. Doug Egerton examines how Mustakeem expands scholarly conceptions of the Middle Passage. Marisa Fuentes situates Slavery at Sea in a broader history of capitalism, labor, and wealth. Jessica Millward describes the study as honoring the dead. Joshua Rothman discusses Mustakeem’s decision to center the physical and mental ramifications of the trade while Vanessa Holden explores Mustakeem’s depiction of gendered resistance during the trade. All of the contributors enrich our understanding of the work Mustakeem is engaged in with Slavery at Sea. They also reflect on Middle Passage Studies more broadly, offering suggestions for how and where research on the slave trade might go in the future.

Comments on “The Moral Challenge of the Middle Passage”