*This post is part of our new blog series on The World of the Black Panther. This series, edited by Julian Chambliss and Walter Greason, examines the Black Panther and the narrative world linked to the character in comics, animation, and film. 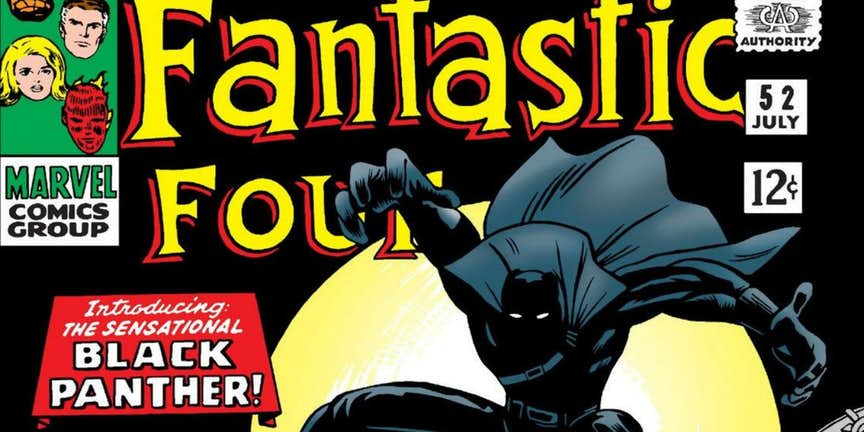 In 1966, the world heard the first roars of three Panthers that would continue to influence America fifty years later. T’Challa pounced into The Fantastic Four #52 July of ’66, where he quickly and effectively disassembled America’s superhero family. A few months before his jump into the comic world, Stokely Carmichael with the Student Non-Violent Coordinating Committee (SNCC) and the Lowndes County Freedom Organization (LCFO) started using a black panther as LCFO’s party symbol. This influenced the Black Panther Party (BPP) to adopt the toothy crouched panther as their symbol.

While it has been well documented that Huey Newton and Bobby Seale asked Stokely and the LCFO if they could adopt the symbol, much less is known about the relationship or lack thereof with the King of Wakanda. The Black Panther is a symbol that has been viewed as a revolutionary symbol of Black Power but the comic book character better symbolizes the American ideals of freedom, independence, and justice.

The legendary Marvel visionaries Stan Lee and Jack Kirby (creators of The Fantastic Four in 1966) were in the height of their creative burst of the 60’s when they introduced the Black Panther. In The Fantastic Four #52, T’Challa invites the intergalactic superheroes to his country in “the greatest hunt of all time” where he would hunt the family, unknowingly to them. The Black Panther sends a flying machine more advanced than anything Mr. Fantastic, a scientific genius in his own right, has ever seen to retrieve the Fantastic Four. After they arrive, they are immediately confronted and easily defeated by the Black Panther. With his superior technology, intelligence, wit, and a killer aesthetic, T’Challa’s debut echoed many of the Black Power and Black nationalist qualities that have grown out of the 1960s: Black pride, economic independence, and a Pan-African consciousness.

Stan Lee was not shy about tackling the issue of bigotry and prejudice head on in the 60’s. He had already created The X-Men in 1963 whose purpose was to “use [their] powers for the benefit of mankind… To help those who would distrust us if they knew of our existence.” Then a few years after creating the X-Men, Lee states “bigotry and racism are among the deadliest social ills plaguing the world today.” There is general agreement that Lee was writing primarily to engage with his audience of young adults and teenagers but there are clearly times he believed it was within his right as a person with a platform to speak out against hate. It may come as no surprise, then, that Lee helped create Marvel’s first Black superhero along with the help of Jack Kirby who created another national symbol style superhero, Captain America. Their Black Panther symbolically resembled dreams of independence and Black Power that many Black activists and nationalists such as Marcus Garvey, Mittie Maude Lena Gordon, Amy Jacques Garvey, Huey P. Newton, Bobby Seale, and Stokely Carmichael endorsed.

In December 1965, The New York Times featured an article introducing the country to the Lowndes County Freedom Organization (LCFO). SNCC helped the LCFO to become an “all-Negro ‘third party,'” which would “free Negroes of white economic pressure” by electing Black farmers to multiple Federal committees.1 John Hulett and the LCFO received the help of Carmichael and SNCC to encourage Black people to register to vote. LCFO attempted to elect Black candidates to improve conditions for Black people in Alabama. Carmichael and Hulett encouraged residents to vote for Black candidates who used the black panther as their party symbol.

In 1966, Stokely inspired Bobby Seale and Huey Newton with his Black Power rhetoric and the LCFO’s Black Panther symbol. Both Seale and Newton understood the significance of the roaring Black Panther imagery so they asked to use the symbol. Shortly after the Black Panther Party was born, Seale explained that the black panther symbol is appropriate for Black people in America because “[i]t is not in the panther’s nature to attack anyone first, but when he is attacked and backed into a corner, he will respond viciously and wipe out the aggressor.” Following in the footsteps of earlier Black nationalists, the BPP believed in Black Power and independence, which they were determined to achieve through arming themselves and by following a succinct Ten Point Program.2 Newton drew inspiration from Vietnam where nearly 30 million Vietnamese threw out the Japanese, the French, and then “kicked the hell out of Americans.” He believed that African Americans must follow in the footsteps of the Vietnamese and break free of their white oppressors. The black panther as a symbol, then, was perfect for the BPP to show their power, anger, and willingness to liberate themselves by tooth and claw.

National and political symbols arguably have similar purposes as American superheroes. Jack Kirby’s Captain America was introduced in 1941 by giving Hitler a right hook. While Kirby was working on Captain America, Stan Lee was creating manuals and writing training scripts, as one of only nine playwrights in the United States Army. Both Kirby and Lee started their careers by creating symbols and modern mythologies that helped sway the general public into joining World War II. Their work at Marvel continued the rhetoric of molding and reinforcing the American ideology into symbolic superheroes.

Superheroes exist as symbols that reinforce American ideals such as “Truth, Justice, and the American Way.” Captain America, for example, fights Nazis, saves the planet from world destruction, and partners with heroes to guarantee Earth’s survival. Superheroes are modern mythologies that reinforce beliefs of what is right or wrong in American society and what we as a people should look like or aspire to be. That is why Captain America is a white blonde-haired man who gains superpowers after a technological boost in the midst of World War II. Captain America does not represent the melting pot mythology of America and in 1966, a new symbol was sorely needed for African Americans.

T’Challa in 1966 becomes another American symbol, but this time one that reflected Black Power and black nationalist rhetoric of the period. In the Black Panther’s first appearance he easily defeats the Fantastic Four. Following their defeat he explains to them that they were a test to see if he could stand up against the Klaw, who was on his way to steal Wakanda’s valuable resource: Vibranium. T’Challa’s origin story reflects the history of colonialism in Africa. This story has a twist, however. The Klaw is driven back and Wakanda continues to exist unconquered. During WWII, T’Chaka (T’Challa’s father) repels Nazis who come to steal the vibranium deposits and then defeats Marvel’s American symbol. 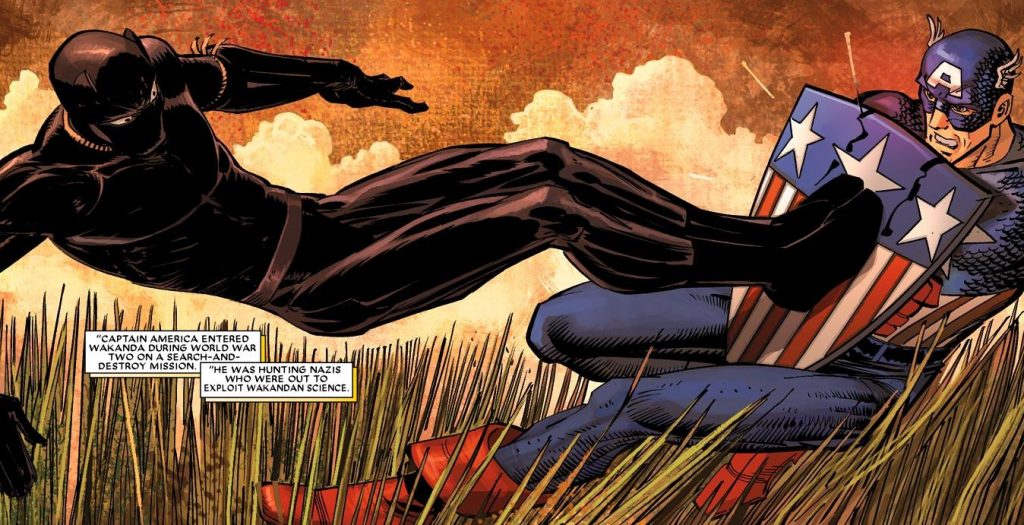 The Black Panther exemplifies the African American mythology that was being forged in the 60’s of independent and liberated Black people. Similar to Captain America, the Wakandan King represents the mythology of American ideologies like freedom, independence, superior technology, and advanced weaponry. The difference is that for the first time in a Marvel comic a Black person was representing these mythologies that were reserved for white men and women.

Yet, for all the similarities between the Black Panther, the Lowndes County Freedom Organization (LCFO), the Black Panther Party (BPP), the Black Panther was not a Black revolutionary character. The King of Wakanda had more similarities to the American mythology found in superheroes like Captain America and the Fantastic Four. His character even gets a name change in The Fantastic Four #119 and is reintroduced as the Black Leopard. The Thing, another comic book character, has a few questions about the name change to which T’Challa responds, “I contemplate a return to your country, Ben Grimm, where the latter term has – Political connotations. I neither condemn nor condone those who have taken up the name – but T’Challa is a law unto himself. Hence, the new name – a minor point, at best, since the panther is a leopard.”3

Jordan X. Evans is a scholar and activist who attends Central Michigan University. He is currently studying abroad at the University of Bochum in Germany. He studies 20th century African American history and is in the process of writing a Master's thesis on the rhetoric, ideologies, and history of the X-Men comics. Follow him on Twitter @The_Jordan_X.