loading...
By Jonathan W. Gray March 17, 2018 Comments Off on Black Panther and Cold War Colonialism in the Marvel Universe

*This post is part of our new blog series on The World of the Black Panther. This series, edited by Julian Chambliss and Walter Greason, examines the Black Panther and the narrative world linked to the character in comics, animation, and film.

The Black Panther’s 1966 debut, in Fantastic Four #52 and #53, establishes him as one of the foremost scientists in the Marvel Universe. The Fantastic Four journey to Wakanda after “an African chieftain called the Black Panther” sends Reed Richards an advanced airship. Richards, scientist and leader of the Fantastic Four, marvels at the technological acumen of the airship’s construction, and, his curiosity piqued, journeys with his team to Wakanda to meet the airship’s maker. Upon arriving on the continent, the FF discover “a strange new land” where “even the boulders can be heard to hum with the steady pulse of computer dynamos.” The Fantastic Four #52 undoes several stereotypes about Africans by granting the Black Panther technological expertise, militaristic discipline, and an egalitarian nobility. For example, when the Black Panther confronts the Thing (Ben Grimm), he doses him with a gas that temporarily reduces Grimm’s super strength because “in any equal match, the Black Panther is certain to win!” Indeed, T’Challa skillfully bests each member of the Fantastic Four by neutralizing their powers, which is to say by making them his equals. Unlike the comics of Fanon’s colonial youth, the Fantastic Four #52 deliberately positions the ‘Negro’ as intellectually equal to his white counterparts, establishing the competence of African peoples in the face of Western scientific dominance.

In the Fantastic Four #53, T’Challa reveals that Wakanda preserved its independence in part by keeping knowledge of a unique ore known as vibranium—a metal with the ability to absorb vibrations—from the outside world. Richards quickly realizes the military application of vibranium declaring it “worth a fortune to our missile program alone! Rockets made of vibranium would never go off course.”1. All of this is threatened by a renegade scientist known as Klaw, who seeks to invade Wakanda and seize this rare metal. Indeed, Klaw invaded Wakanda a decade earlier, killing T’Challa’s father T’Chaka and devastating the nation he ruled. T’Challa has prepared assiduously for Klaw’s return, rebuilding his homeland by selling “small portions of vibranium…enabling [Wakanda] to amass a fortune the equal of any on earth” while educating himself at “the fine universities of both hemispheres.” Black Panther invited the Fantastic Four to Wakanda in order to test himself, reasoning that if he “could fight (the Fantastic Four) to a standstill” he would prove capable of defending his country against Klaw.

Klaw launches his long-anticipated attack on Wakanda while T’Challa is relating this story to the Fantastic Four, allowing them to assist him in preserving the sovereignty of the imperiled African nation. The Fantastic Four engage Klaw’s sound constructs, preventing them from harming the Wakandan populace while the Black Panther slips behind the front lines, confronts Klaw, and cripples the machines powering Klaw’s sonic weapons. Despite his years of training and the “panther powers” that derive from the ingestion of secret herbs only available to the Wakandan royal family, T’Challa defeats Klaw because Klaw “did not realize [T’Challa is] a scientist too!” As with his initial encounter with the Fantastic Four, T’Challa’s victory here depends upon his intellectual superiority. While the pursuit of raw materials led to Klaw’s invasion, the African sovereign’s scientific expertise granted him the means to not only attract powerful allies from the West but also the skills necessary to defeat a colonizing force.

Klaw and T’Challa fit into a common dyad in comics that places scientists “with…commitments to scientific self-interest [against those who embrace] scientific cosmopolitanism,” as noted by Ramzi Fawaz. But Klaw’s iconography marks him not as scientist but as colonial explorer. Klaw first appears clad in a pith helmet that accentuates his pitiless, deep-set eyes and sallow complexion establishing him as a villainous figure. Despite clutching a futuristic “sound transformer,” Klaw represents both the nineteenth century scramble for Africa that partitioned the continent and the Cold War rush to control elements like uranium found in African nations such as the Congo and Gabon. While Klaw’s attire, if not his intentions towards the hidden African nation, might seem anachronistic, we must remember that comics embrace a kind of simultaneity that allows for incongruous concepts to exist alongside one another. T’Challa likens Klaw to a “greedy ivory hunter” even as Klaw himself views his ‘discovery’ of vibranium in Wakanda as confirmation of his pioneering genius, furthering the connection between the Cold War’s consumption of minerals from the continent and the depredations of colonial actors like the Belgians who ‘discovered’ rubber and ivory in the Congo. As Ramzi Fawaz notes, in comics “villainous scientists…are nearly always misanthropic loners or outcasts who have spent their lives perfecting knowledge of a single scientific specialty in isolation from larger communities of scientists.” Klaw combines this misanthropic isolation with a racial chauvinism demonstrated by his willingness to subdue an independent African nation simply to control an element needed to fashion modern munitions. 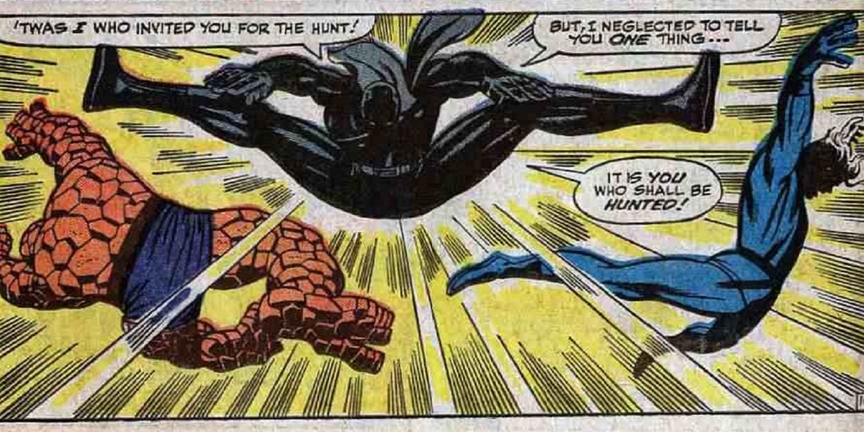 Constructing a narrative via a collapsing of the past into the present—which defines the superhero genre and thus shapes the Black Panther from this first appearance—conforms to Achille Mbembe’s assertion that “African existence is neither a linear time nor a simple sequence in which each moment effaces, annuls and replaces those that preceded it.” Instead Africans live in a state of “entanglement” where “time is not a series but an interlocking of presents, pasts, and futures that retain their depths of other presents, pasts and futures, each age bearing, altering and maintaining the previous one.”

While Mbembe articulates this radical state of simultaneity in order to describe the oscillating and contradictory process by which a nation moves from a colony through a period of decolonization to become a postcolony, this notion of entanglement is also a useful way to understand superhero comic continuity. All the characters in the fictive space of a superhero universe are connected with each of the others, and not simply because the same corporate body controls their copyright. Via the logic of comic continuity—which is to say comic entanglement—every story in the Marvel universe connects with every other story and thus each story exerts the possibility of a revisionary pressure upon every other story.

With his nation secure after repulsing Klaw’s invasion, T’Challa thanks the Fantastic Four for their assistance, relieved that this existential threat to Wakanda seems unlikely to resurface. The Fantastic Four encourage T’Challa to continue his adventures, literally pushing him out of the isolationism that has protected Wakanda for generations by insisting that “the world will always have need of a dedicated powerful fighter against injustice.” At the Fantastic Four’s prodding T’Challa decides to remain connected with the world, placing the good of the cosmopolitan global society over the preservation of his isolated nation, going so far as to altruistically “pledge [his] fortune, [his] powers—[his] very life—to the service of all mankind.” With this declaration, T’Challa chooses to join the ever-expanding pantheon of heroes in the Marvel Universe, bringing diversity to Marvel’s cohort of heroes while irreversibly altering the nature of his hereditary relationship to the nation.

Jonathan W. Gray is Associate Professor of English at John Jay College-CUNY. He is the editor of the Journal of Comics and Culture and the author of Civil Rights in the White Literary Imagination (University Press of Mississippi, 2013). Gray is currently working on a book project entitled Illustrating the Race: Representing Blackness in American Comics (Columbia University Press, forthcoming). Follow him on Twitter @elmcitytree.