In Percival Everett’s satirical novel Erasure (2001), a struggling author in need of money to pay for his elderly mother’s care sets aside the radically experimental style and ostensibly raceless subject matter of his previous books and undertakes to produce a sensationalist novel of Black urban life that will cater to publishers’ and readers’ expectations of what and how an African American author ought to write. The resulting book manuscript, ludicrously titled “My Pafology,” is snapped up by Random House for $600,000 and wins the National Book Award, plunging its author (who has the resonant name of Thelonious “Monk” Ellison) into a trough of disorientation and self-loathing.

Erasure would seem to encapsulate the spirit of revolt in twenty-first-century work by African American artists that some critics have celebrated as the dawn of a “post-Black” sensibility and aesthetic. In relinquishing the authorial style and concerns that motivate him as an artist in order to conform to notions of “Black art” that are pre-determined and tightly scripted, Everett’s Ellison is seen to be damned by his complicity in perpetuating flattened, reductive notions of “blackness” that re-inscribe the fictions of race, curtail individuality and imaginative freedom, and reinforce essentialisms of gender and sexuality. Yet as Margo Natalie Crawford argues in this important and boldly original book, to label Erasure as a “post-Black” novel is to miss how its satire points in more than one direction, taking aim not only at notions of Black “authenticity” but at the suppositions underlying “post-Black” claims as well. It is to miss what Crawford calls the “black post-blackness” that animates Everett’s writing and much early-twenty-first century literary and visual art besides.

As Crawford points out, Everett’s critique of reductive definitions of “Black art” does not leave us with the single alternative of art that is “obscure” and detaches itself from the lived realities of a racialized social order. Thelonious Ellison is drawn to woodwork, finding in that activity a groundedness and “function” that his writing lacks. For Crawford, this signals Everett’s sense of the futility of disowning, as opposed to working and reworking, blackness. “Thelonious is not post-black,” she writes, “he is black post-black. He asserts that he does not ‘believe in race’ and therefore cannot wear his blackness tightly, but he does not repudiate blackness.” That blackness is an endless process of churning, questioning, and dialogue, and not a fixed or closed domain, is the central tenet of Black post-blackness. And Crawford finds it in some unexpected places. 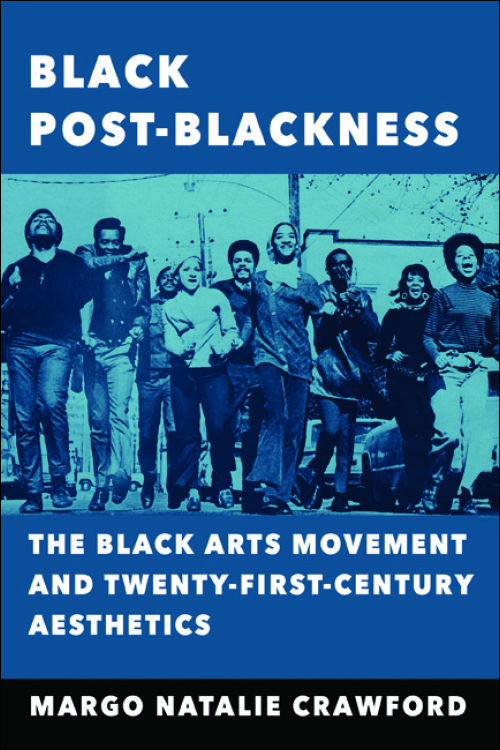 Theorists of the “post-Black” have typically welcomed the work of authors such as Everett and visual artists such as Glenn Ligon as marking a break with the didactic, prescriptive codes of blackness and Black art that these theorists associate with the nationalist Black Arts Movement (BAM) of the 1960s and early 1970s. Derek Conrad Murray’s 2016 book Queering Post-Black Art, for example, reads the BAM as having solidified the identity of the “Black artist” as one that demands “foreground[ing] one’s racial identity at the expense of more universal aesthetic concerns” and necessitates elevating “the political over the formal,” whereas the “post-Black” serves “to question the problem of intra-cultural obligation and the demand for racial fidelity.”1 Crawford’s book succeeds in upsetting such narratives, which, she claims, perform a flattening of their own. The BAM is too often hammered into a foil for the later, liberating move to the “post-Black,” in ways that homogenize the aesthetics and ideals of the Black Power era and reduce them to their crudest, or most crudely understood, formulations.

Crawford does not deny that the discourse of the BAM sometimes gave blackness a restrictive, essentialized quality. However, she argues convincingly that such thinking did not go uncontested within the movement. In fact, particularly within the BAM’s “second wave,” during the early 1970s, its artists frequently articulated their own discomfort with prescriptive notions of blackness, and worked to imagine blackness as a space of plural, unfinishable questing. Black post-blackness was a presence within the BAM itself, manifesting as an “often illegible mood” in which “the black collective romance” was “inseparable from frustration with a black collective sensibility.” In this sense, Crawford reconfigures the BAM’s relationship to twenty-first-century Black aesthetics so that the former is not the foil for “post-blackness,” but rather the source of initiation and inspiration for many elements of the “black post-blackness” that infuses much of the African American art of our moment.

Across seven chapters, Crawford uncovers the multiple strands that connect BAM aesthetics to recent literary and visual artworks, including ideas and practices of anticipation, abstraction, mixed-media, and regionality and transnationality that in various ways enacted blackness as open, expansive, and self-questioning. In the process, we not only see widely known figures such as Larry Neal, Amiri Baraka, Kara Walker, and Kerry James Marshall from new angles, but are also confronted with the works of such understudied figures as the Louisiana poet Quo Vadis Gex-Breaux and the Detroit-born novelist Carlene Hatcher Polite. Gex-Breaux’s notion of “overdubbing,” which Crawford explains as “working with and not against,” embodies how black post-blackness works as a dialogue with and expansion of the space of “Black art.” In Chapter 5, “The Satire of Post-Blackness,” Crawford finds in the 1970s works of Baraka and other BAM figures a satirizing of “blacker-than-thou” attitudes that prefigures the “defining” satirical mode of contemporary literary and visual artists including Paul Beatty, Colson Whitehead, Kara Walker, and Mickalene Thomas. The laughter invoked during both moments serves as a refusal of simplistic notions of blackness and post-blackness alike, both of which “cancel out the sheer pleasure of the simultaneity of feeling black and post-black.”

Black Post-Blackness is a landmark study that makes a series of powerful interventions by offering new and revealing ways of comprehending the BAM, the putatively “post-Black” art of the twenty-first century, and the relationship between the art of these two eras. With respect to the BAM, Crawford might have further strengthened her case by explaining more fully how the anti-essentialist currents that she reveals within that movement vied and co-existed with the “normativity of much of the gender discourse and the racial-authenticity impulses of the BAM,” which she invokes in the book’s introduction but returns to somewhat sparingly in its subsequent chapters, mostly towards the end of the book.

This kind of elaboration would have been especially fruitful in her discussion of works by Amiri Baraka, such as his poems “SOS” (1966) and “It’s Nation Time” (1970). These feature throughout the book as examples of a BAM conceptualization of blackness as a search, rather than a code. Yet for several years coinciding with the peak of the BAM, Baraka (along with the Chicago BAM poet Haki Madhubuti) was a leading advocate of Kawaida, the Afrocentrist “value system” devised by Ron Karenga, which was undoubtedly one of the most doctrinaire and essentialist iterations of Black cultural nationalism. Crawford cites Karenga’s 1967 maxim “You were black before you were born” as embodying the blunt, reductive messaging against which Black post-blackness asserted itself. It would be fascinating to read in greater depth about how, for example, Baraka’s heavy investment in Kawaida during the late 1960s and early 1970s, and his professions that “nature” had dictated the proper roles and behaviors of Black men and women, co-existed or competed, within his own consciousness, with the countervailing tendencies of Black post-blackness that Crawford has uncovered in his writings.2 Meanwhile, Crawford has given us a far-reaching and highly original analysis that will reframe our conversations about the past half-century of African American artistic creativity.

Daniel Matlin is Senior Lecturer in U.S. History at King's College London. His research centers on twentieth century African American intellectual life and urban life, and his publications include 'On the Corner: African American Intellectuals and the Urban Crisis' (Harvard, 2013). He is also co-editor (with Andrew M. Fearnley) of 'Race Capital? Harlem as Setting and Symbol' (Columbia University Press, 2018).

Comments on “The Black Arts Movement and Twenty-First-Century Aesthetics”