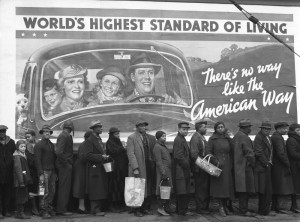 I love Ta-Nehisi Coates.  David Brooks…not so much.  Biases disclosed, their squabble—if one can even call it that—exposes a more general interpretive haze that envelopes most popular understandings of American and African American history.

Brooks’s missteps hardly need recounting.  The American Dream is bullshit.  Heaping piles of lies smothered in a thick mythology and built upon the backs of enslaved peoples.  And yes, Mr. Brooks, that mound of filth is by design.  One cannot begin to explain the American Dream without full sight of the American Nightmare.  As both a country and an ideal, America is a thoroughly poisoned tree. The very idea of the Dream has never existed without the deeply rooted evil that created and sustains it. Here, Coates is absolutely right. Systemic, violent injustice has underwritten both America and its Dream.  The ever mounting debt to black people continues.

Embarrassingly, scholars have known about this central organizing dialectic for decades.  Edmund Morgan’s highly influential article “Slavery and Freedom: The American Paradox” (1972) is now all but gospel for any serious historian working on the topic today. Coates has successfully distilled Morgan’s foundational paradox into clear and succinct prose.  Historians could have (and should have) done this a generation ago.  The very notion of American freedom (much less its limited exercise) necessitated the enslavement of African peoples as a matter of historical fact. Slavery was not an accident.  It was not an oversight. It was not a superfluous ‘product of its time’.  It was a conscious choice where several less evil options existed. For Morgan’s colonial America, there was simply no freedom (real or imagined) without slavery.

This truism functions as both an ideological reference point and a material reality. Slaves not only had their bodies ground into tobacco, sugar, and cotton to fuel industrialization in Europe.  They also provided the cognitive baseline for what constituted un-freedom in the Atlantic world.  White colonists in America used this fear of a ‘liberty under threat’ in their attempts to shed the governance of the British crown. Whites didn’t want to be “slaves” to King George—like the real slaves they knew all too well were laboring under their power.  Whites wanted to be free.  Rhetorically and materially, slaves enabled that freedom in more ways than one.  The actual manual labor extracted from slaves gave whites (both slaveholders and non-slaveholders) the precious time to attend political meetings, develop new industries, eat surplus calories, and most importantly fantasize about how great life would be if a permanent, racialized, unpaid labor force could be made to do all the hard work while white America kept all the profit. If the King of England didn’t get his cut, so much the better.  Freedom didn’t exist in spite of slavery. It existed because of slavery.  Put another way, as Coates has done so many times with his trademark clarity, white supremacy “is not a bump along the road.  It is, in fact, the road itself.”

While Morgan is the touchstone for many historians on this topic, both he and Coates stand on the shoulders of giants.  Both Derrida and Hegel worked on binaries as the colliding spaces where conceptual identities developed through interactions with one another. For Hegel, masters needed slaves to be masters.  For Derrida the center of any society was defined largely through its exclusions and its margins.  More concretely, however, Eric Williams might best be described as the intellectual grandfather of both Morgan and now Coates (who explicitly references Williams on page 45).  The Williams thesis—also now well-established among historians—held that Western modernity, and industrial capitalism specifically, is inextricably linked to slavery.  While several economic assumptions in the Williams thesis were later discredited (most notably the assertion that slavery was a pre-capitalist institution that was becoming unprofitable and naturally dying out in the 18th century) its basic insights have received a welcome revival from recent scholars.  Thomas Holt, Robin Blackburn, and the fields of Atlantic and Caribbean history in general have effectively reworked the Williams thesis into a global narrative that preemptively supplements Coates’s more nationally bound story.  Not incidentally, this connection between slavery and capitalism is also something that scholars working on the ‘new’ history of capitalism have been taking up with great gusto.

While Coates relies heavily on scholars (particularly historians) and credits them in a way that few popular writers do, his implicit critique of them is that he feels the need to translate, condense and synthesize them at all.  If we were doing our jobs as writers, scholars, and teachers the supposedly revelatory, newsworthy arguments of Coates/the academy would have been accepted as common wisdom decades ago. Coates is succeeding where scholars have failed. He is shouting from the mountaintop because we have not. Much like Key and Peele’s anger translator says the things that the fictional Obama wishes he could say, Coates is consciously acting as an academic interpreter, clarifying complex ideas that academic prose tends to obfuscate.  He is our generation’s synthetic genius.  A postmodern vessel of truth capable of mixing, sampling, cutting and pasting the world’s chaos it into something altogether fresh.  And terrifying.

Even as scholars will nod their heads to the familiar tones that Coates is so eloquently laying down, those of us with similar life experiences (academics or not) will also find his codification of the rules of the street equally on point. This is a rare combination.  “The great danger that haunted every visit to Shake & Bake” (p.25) may have taken place at a Del Taco for some of us West Coast residents, but the threat of violence and the rules that governed it ring remarkably true from L.A. to Baltimore.  While the ideas of Hannah Arendt (p. 8), Winthrop Jordan (p. 7), Walter Johnson (p. 104), Edward Baptist (p. 101), and David Blight (p.102) are all dealt with implicitly by Coates, that one glorious footnote to Thavolia Glymph (p.105) should leave historians cheering aloud. I just KNEW that quote came from Glymph the moment I saw it! While it took Eric Foner 690 pages to synthesize a mere 14 years of American history, Coates has done 400 years in 152.  Granted, he doesn’t have Foner’s footnotes or academic credentials (and, yes, I have my criticisms of Between the World and Me as a history), but one can’t help but think that Coates read everything that Foner read and then some.  Many marvel at Coates’s writing.  I, for one, marvel at his reading.

And yes, Mr. Brooks, just as James Baldwin won the debate against William Buckley exactly fifty years ago: “The American Dream (if there ever was such a thing) is at the expense of the American Negro.” And the tab keeps growing.  But you shouldn’t listen to Ta-Nehisi Coates because he’s black.  You should listen to him because he is correct. Your problem in this case is not rooted in your whiteness (as you so fear) but in your wrongness. Coates does not “distort American history” he recounts it—accurately.  Historians who know anything about this question stand firmly behind Coates.  He is simply better read and better informed on this topic than you are. This is not your fault.  As scholars, it is ours. Journalists with top shelves packed full of Frederick Jackson Turner and the Dunning School are a danger to themselves and to the people around them.  The vibrant flood of 21st century scholarship that Coates is weaving together must become the standard, not the exception.  Coates can show historians how to write.  But perhaps more importantly, he can show David Brooks how to read.

Comments on “Ta-Nehisi Coates, David Brooks, and the Master Narrative of American History”