Over the next six days, the African American Intellectual History Society will feature a roundtable on Hakim Adi‘s Pan-Africanism and Communism: The Communist International, Africa, and the Diaspora, 1919-1939 (Trenton: Africa World Press, 2013). Professor of History at the University of Chichester in West Sussex, Adi is one of the leading British historians specializing in the history of Africa and its Diaspora. He is the author of West Africans in Britain 1900-60: Nationalism, Pan-Africanism and Communism (Lawrence and Wishart, 1998); (co-authored with Marika Sherwood) The 1945 Manchester Pan-African Congress Revisited (New Beacon, 1995) and Pan-African History: Political Figures from Africa and the Diaspora since 1787 (Routledge, 2003); (co-edited with Caroline Bressey) Belonging in Europe – The African Diaspora and Work (London: Routledge, 2010).

Adi’s most recent book, Pan-Africanism and Communism, charts the dynamic and transnational work of the Communist International (Comintern) and the International Trade Union Committee of Negro Workers (ITUCNW) in West Africa, South Africa, the Caribbean, Britain, France, Germany and the United States. This thoroughly researched study offers the most comprehensive account of the organizational activities of the ITUCNW and lays out, in great detail, how the Comintern addressed the “Negro Question” during the 1920s and 1930s. Often viewed as competing ideologies or separate movements, Adi skillfully shows how Pan-Africanism and Communism were deeply intertwined during this period. Drawing on primary sources from the Moscow archives of the Communist International as well as material from collections in Africa, the United States, Britain and France, Adi’s Pan-Africanism and Communism highlights the voices and experiences of a myriad of black political activists including George Padmore, Claude McKay, Hermina Huiswoud and Elma Francois. The book joins a vibrant body of scholarship on the relationship between black liberation struggles and the Communist Left including the recent works of Gerald Horne, Minkah Makalani, Erik S. McDuffie, and Dayo F. Gore. 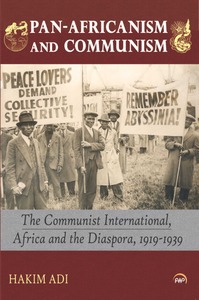 A decade in the making, Adi’s book covers a lot of terrain and engages a number of central themes including black radicalism, Communism, internationalism, and Pan-Africanism during the twentieth century. Each day this week the African American Intellectual History Society will post a different review by one of our contributors. Each review will discuss various aspects of Professor Adi’s work, highlighting both the strengths and weaknesses. Please join the conversation by posting comments and questions below and/or tweeting using the hashtag, #AAIHSRoundtable.

To officially launch this roundtable, we begin with opening remarks from Gwendolyn Midlo Hall. Professor Hall is a prominent historian of Africa, the United States and Caribbean. She is an award-winning author and Professor Emerita of Latin American and Caribbean History at Rutgers University, New Brunswick. After retiring from Rutgers University’s History Department in 1996, she moved to Michigan State University in 2010 to work on a National Endowment for the Humanities funded slave database project. She is the author of several books including Africans in Colonial Louisiana: The Development of Afro-Creole Culture in the Eighteenth Century (Louisiana University Press, 1992); Slavery and African Ethnicities in the Americas: Restoring the Links (University of North Carolina Press, 2005); and A Black Communist in the Freedom Struggle: The Life of Harry Haywood (Minneapolis: University of Minnesota Press, 2012).

This stunningly conceived and exhaustively researched book brings to life the little known contribution of the Comintern to Pan-Africanism during the 1920s and 1930s. The sustained support by the international Communist movement helped plant the seeds for political independence for African nations prioritizing the unending struggle for equality of Africans and their descendants in Europe and the Americas. Hakim Adi definitively shows that the Comintern placed international Black liberation at the heart of a powerful movement which organized and led struggles to end the imperialist exploitation and terror suffered by African and African descended populations throughout the world. It laid foundations for the Black Power movement in the United States starting from local movements in the Black Belt South from the early 1930s through the 1970s. Black Power movements bounced throughout the Caribbean, Latin America and Africa after World War II and helped bring independence to African nations and an end to apartheid in South Africa. Rescuing international Black radical history from the intellectual deep freezer which began with the Cold War 65 years ago and still dominates world scholarship is a daunting task. I ask Hakim to elaborate on his discussion of George Padmore in the context of the shift in the Comintern line between its Sixth and Seventh Congresses and the massive repression of the Comintern in the Soviet Union during the late 1930s. Much thanks for your fine work.

**What other questions do you have for Professor Adi? Please add your questions or general thoughts below or send us a tweet (@AAIHS) using the hashtag, #AAIHSRoundtable.

Comments on “Introduction: Roundtable on Pan-Africanism and Communism by Hakim Adi”