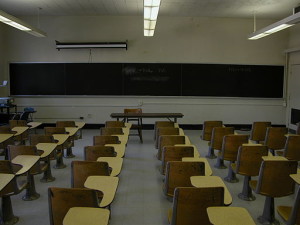 At the end of every term, with great trepidation, meditative breathing, and perhaps even a homemade cocktail, I look to see how my students have evaluated my teaching. Student evaluations are extensively studied and controversial for very many different reasons. Student evaluations are also only one way of gauging teaching effectiveness. Other tools include peer reviews, self-evaluation, video analysis, and testing for learning outcomes. Among these varied evaluative approaches, student ratings, for better or worse, are and will remain a central component of teaching assessment at my institution. In most effective learning environments, the trust between the teacher and the class reflects a mutuality of interest in the content and the approach of the course; however, the concerns of the teacher and of the students are not necessarily the same. Despite their problems, when read carefully student evaluations can begin to suggest some concerns of the students and sometimes these concerns can provide vital perspective on how a teacher might organize future content and pedagogy. To be clear, I am not arguing for or against the use of student evaluations. Rather, I am suggesting that evaluations sometimes raise interesting issues concerning the interplay between teacher, student, class environment, and course content. Moreover, in my teaching experience, the distances and disjunctures between my concerns as the instructor and those of the students give rise to important questions concerning the complexities of teaching about race, religion, and politics in the context of the United States.

This past winter, I taught a varied topics course titled Religion and Politics in the United States. This is the catalog description of the course,

Variable topics. Explores the interplay of religion, politics and culture in the United States, focusing on citizenship and religious identity in the USA’s multicultural, multiethnic, multireligious society. Various sections will focus on different particular religious communities and themes, such as the Religious Right and the Religious Left, the political activities of particular communities, and the challenges of interreligious dialogue.

Following the “variable topics” description, various members of my department have taught this class in many different ways that have reflected their particular research and teaching interests. I first taught this class with an emphasis on issues of religious and cultural plurality in U.S. history. I did not think that my first version held together well, and I decided to refocus the course using the issue of race. My current course description follows:

REL 224 defines politics broadly. Instead of defining politics in narrow terms related to government bureaucracy, voting patterns, and legislation, REL 224 defines politics in terms of cultural, social, and religious ideas about race and citizenship and in terms of movements and events that seek social and political change. REL 224 follows the complex intersections between race and religion in American politics from slavery during the colonial period to the Civil Rights era in the twentieth century. Some topics to be explored in class include the origins of American evangelicalism; the conversion of slaves; the relationship between religious belief and abolitionism; the connections between slavery, religion, and the Civil War; and the relationships between religion, race and the Civil Rights movement.

During the first six weeks of class, in addition to other readings I provided, students had to purchase and read Charles F. Irons, The Origins of Proslavery Christianity: Black and White Evangelicals in Colonial and Antebellum Virginia (Chapel Hill: University of North Carolina Press, 2008). The last four weeks of the class considered the Civil War and ended with the Civil Rights movement. The class covers a lot of ground in ten weeks but it also spends most of its time in the eighteenth and nineteenth centuries. Spending most of the class time in the eighteenth and nineteenth centuries gives needed historical perspective to students who tend to have little understanding of continuity and change regarding race and who tend to think about race, religion and politics only in the present.

This class did not match the course description, I did not think I was signing up for a class so centered on slavery. I thought this class was on the formation of American values.

Student B responded to the same question with the following,

The course content didn’t match the course description at all which I was ok with[.] I still enjoyed the course but it is called religion in politics so you expected to talk about how religion is used and effects politics. But that is not the case[,] it is actually a civil rights/slavery class.

Student C responded to the same question with the following,

The course was close-ish to course description. However, I really think this course would be more accurate as a African American studies class or at least with the renaming of Slavery, US Politics, and religion.

I am intrigued that for a minority of students, 10 weeks of my instruction seemed to demonstrate that my class was less about religion and politics in the U. S. and more about race, slavery, and civil rights. I interpret their critiques to mean that religion and politics are issues that affect all U.S. citizens, but that race, slavery, and civil rights are issues that should be discussed separately in a class that contains race, slavery, civil rights or African Americans in its title. I am perplexed by the student’s separation of slavery from “American values” given how I described the course and given the content of the course.

Rather than dismiss these comments, they make me more wary of the delicate ideological terrain in the classroom. Because of the politics surrounding the teaching of race and because I am Black, but also because I like to teach, I try very hard to create an environment where students can more easily confront and discuss difficult and complicated subjects. Student B, who critiqued my course description, also wrote,

The professor is very knowledgeable on the subject [.] he knows how to teach the course very well and leads discussion effectively. Overall great teacher not only would I recommend him but I hope to have him again in other courses.

Encouraging students is a part of the art of teaching. However, if I were somehow a bit less social in the classroom or just a little less energized by being in front of a class, I wonder if the tenor of student reviews would dull slightly in response. I also wonder if even more students would suggest that the course catalog title did not match the course I described and taught.

The commentary about the seeming discrepancy between my course content and the catalog description suggests that I should do a little more to repeat my concerns throughout the quarter. In REL 224, but also in other classes, I am concerned to have students think about the meaning of politics in nuanced ways that would lead them to realize the significant relationships between race, slavery, civil rights, religion, and “American values.” If I failed to help a few students think more deeply about the meaning of politics in America, then, perhaps, rather than change the course title, I need to do a better job of constantly reminding my students of my definition of politics.