loading...
By Garrett Felber March 9, 2016 Comments Off on Hubert Harrison, Socialism and the Black Vote

The Democratic primary has again brought to the fore old debates about the relationship between class and race. In an interview with Democracy Now!, Ta-Nehisi Coates‘ critique of Bernie Sanders on the question of reparations came in part from his frustration with the senator’s insistence on class solutions to racial problems. While there is little dissension among public intellectuals and scholars over the question of whether or not Sanders’ policies would be beneficial to black Americans, the submersion of race in both Democratic candidates’ campaigns has again raised the specter of class over race. And in the case of Sanders, it raises an even older question of the ability of socialism (or perhaps more aptly, socialists) to understand racism as an interlocking yet distinct form of oppression.

For more insight on this debate, it is worth revisiting the intellectual thought and evolution of a (capital “S”) Socialist who repeatedly weighed in on this issue one-hundred years ago: Hubert Harrison. The “Father of Harlem Radicalism,” who influenced a generation of black nationalists and leftists, including Marcus Garvey, Cyril Briggs, Richard Moore, Chandler Owens, and A. Philip Randolph, remains one of the more forgotten black radicals of the twentieth century.

Born in the West Indies, Harrison moved to the United States in 1900 at a time famously described by historian Rayford Logan as the “nadir of race relations.” He quickly rejected Republicans (who still remained the preferred party of most black voters) as a solution for African Americans. By 1911, he had become a leader in the Socialist Party and campaigned for Eugene V. Debs in the presidential election the following year. His writings from this period demonstrated a profound hope for the possibility of socialism in addressing the pernicious effects of racism. He wrote in the New York Call that the Socialists were “not a white man’s party or a black man’s party, but the party of the working class. And the historic mission of the Socialist movement is to unite the workers of the world.” And while he did not “expect that the advent of Socialism will at once remove race prejudice,” he claimed that he did “expect that it will remove racial injustice and lighten the black man’s burden” In the end, Harrison hoped socialism would end “exploitation of one group by another, whether that group be social, economic or racial.”1

However, Harrison also continued to sharpen his analysis of racial oppression and harness the power of separate black political organizing. The same year he supported Debs’ presidential run, he formed the Colored Socialist Club as part of the Socialist Party’s first effort to reach black voters. And despite believing that socialism could eventually eradicate all forms of exploitation, he continued to position black political, social, and economic justice as the litmus test for American democracy. “Politically, the Negro is the touchstone of the modern democratic idea,” he wrote. “The presence of the Negro puts our democracy to the proof and reveals the falsity of it.”2 This applied to socialism as well. The “crucial test of Socialism’s sincerity” for Harrison was its ability to champion the cause of black Americans.3

By 1914, Harrison had become disillusioned with the Socialist Party and he moved towards the Industrial Workers of the World (IWW) before striking out in favor of black political organizing under the rallying cry “Race First!” Over the next five years, he emphasized race over class in response to the persistent racism of white Socialists: “We say Race First, because you have all along insisted on [white] Race First and class after when you didn’t need our help.”4 If socialism could be judged on its ability to address the “Negro Question,” as Harrison had argued in 1911, he had concluded by 1920 that it had failed. 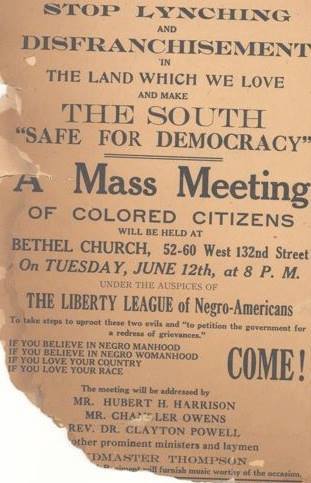 In the months leading up to the 1920 election, Harrison and William Bridges, both critics Marcus Garvey’s reluctance to engage in electoral politics, formed the all-black Liberty Party. The Party grew out of the Liberty League of Negro-Americans which Harrison had first helped organize in 1917, calling for federal anti-lynching legislation and government redress. One legacy of the Liberty League was the “New Negro Movement,” which embodied a similar revolt of young activists against the old guard in black leadership. As Harrison emphasized, the League represented a “breaking away from the orthodox respectable leaders.”

Another other important contribution was its internationalism. Harrison bristled at the “insular notion that [the Negro Problem] stood in peculiar isolation from all the other political, economic and racial problems of the world.” To embody this commitment to an outward-looking political worldview which linked American imperialism, European colonialism, and domestic racism, the Liberty League adopted a three-color flag of black, brown, and yellow. The flag was meant to suggest the shades of black people in America as well as people of color worldwide. According to Harrison, it was this three-colored flag which inspired Garvey’s red, black, and green flag which has now become the international symbol of Black Liberation.5

Although the Liberty Party’s existence was brief, lasting only from June to November 1920, its platform of electing black candidates and endorsing self-defense against racist violence was an important predecessor to later iterations of black nationalist political organizing. The same month that the Party was founded, Harrison penned an article for the UNIA’s Negro World entitled “A Negro for President,” in which he called for an independent black political party to promote a candidate on a racial platform. In some ways, Harrison’s take on American politics is a product of its era. In no uncertain terms did he believe that “the votes of Negroes can elect a Negro to the high office of president of the United States. Nor would anyone expect that votes of white people will be forthcoming to assist them in such a project. The only way in which a Negro could be elected President of the United States would be by virtue of the voters not knowing the particular candidate was of Negro ancestry.”6 Of course, Barack Obama’s historic election in 2008 in which he was elected on both the strength of the black vote (95%) and the help of first-time white and nonwhite supporters (69%), underlines the near-century between us and Harrison’s editorial. But his essay was not without prescience and lasting lessons for our current moment.

As in our present, both gender and class played central roles in the 1920 election. It was the first presidential election since the passage of the 19th amendment in which women earned the franchise, raising the popular vote by over eight million since 1916. It also featured the largest popular vote in favor of a socialist, as Eugene Debs’ fifth independent bid for presidency received almost one million votes despite his imprisonment during the election for advocating draft resistance during World War I. Meanwhile, Warren Harding’s “return to normalcy” slogan, which drew upon popular anger against the social upheaval of the Progressive Era could easily be mistaken for Donald Trump’s charge to “Make America Great Again.” There were anarchist attacks on Wall Street, fears about radical terrorism, and the nation was weary with war and leaned towards non-interventionist foreign policy.

Amid this backdrop, Harrison bemoaned the lack of a “race-first” agenda. The advantage of running a black candidate in Harrison’s view, was that it would “furnish a focusing-point around which the ballots of the Negro voters may be concentrated for the realization of racial demands for justice and equality of opportunity and treatment. It would be carrying ‘Race First’ with a vengeance into the arena of politics.” Harrison understood the importance of mass resistance in the face of lynching, disfranchisement, and Jim Crow. “Where there is but slight pressure a slight resistance will suffice,” he wrote. “But, where, as in our case, that pressure is grinding and pitiless, the resistance that would establish equal conditions of freedom must of necessity be intense and radical.” That meant an independent black political party which would run its own candidates.7

In the first presidential election after the black president that Harrison called for in 1920, we still lack a viable “race-first” agenda which addresses specific systems of oppression that create disparate levels of poverty, incarceration, and education among people of color, particularly black Americans. Bernie Sanders has made a point of emphasizing that the unemployment rate for young African Americans is 51% as compared to 36% for Latinos and 33% for whites (although these figures are disputed, the disparities are not). But foregrounding an agenda which addresses racism’s persistence as the guiding organizer of power and class in America remains one of the missing components for socialists (and all presidential candidates) nearly one-hundred years after Hubert Harrison left the Socialist Party to form an all-black political party and called for “A Negro for President.”