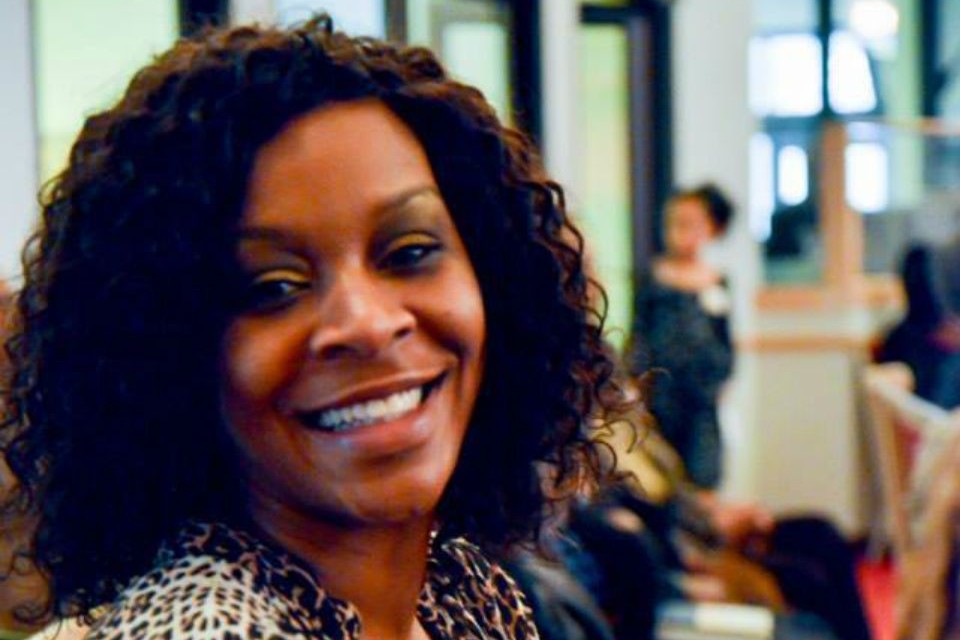 Previous AAIHS posts about Sandra Bland include an account of local civil rights groundwork in Waller County following Bland’s death, and a call for resources to develop #WallerCountySyllabus. Today’s post seeks to narrate recent developments about the case of Sandra Bland by drawing attention to published journalism as well as on-the-ground activism through social media and digital history.

“No Justice! No Fear! Sandra Bland is marching here!” “No Justice! No Peace! Sandy Still Speaks!” “Say Her Name! Sandra Bland!” These chants thundered near downtown Houston on the evening of December 22, 2015, one day after a Waller County grand jury returned no indictments of Waller County Jail officials in relation to Sandra Bland’s death in July 2015. At the rally, among other speakers, activist and scholar Biko Gray called for the release of all evidence about Bland’s death. Supporter and friend of Sandra Bland, LaToya Smith tearfully stated: “That was my friend, and she is not here. She did not commit suicide . . . someone must be held accountable . . . something is wrong in our system.”

National and international news stories reported on the Waller County grand jury proceedings, including the New York Daily News, Colorlines, Russia Today, and Salon. Other outlets such as KTRK Channel 13, the ABC Houston affiliate, Democracy Now!, Chicago Tribune, National Public Radio, the World Socialist Web Site, and Reuters, covered the Bland family’s response to the non-indictments. Russia Today quoted Bland’s mother, Geneva Reed-Veal as saying, “Right now, the biggest problem for me is the entire process. I simply can’t have faith in a system that’s not inclusive of my family that’s supposed to have the investigation.” Similarly, on Democracy Now!, she stated about the December 21 grand jury decision: “I’m disappointed, but not surprised. I just have to say right now that we were looking for transparency, and that’s not what we have been experiencing in this whole journey here. So I’m, again, disappointed, but not surprised.” Additional reporting from iMiXWHATiLiKE!, Al-Jazeera America, Huffington Post, and Truthdig presented questions of state violence against Black bodies, the grand jury system itself, and connected it to similar grand jury decisions in recent cases of police brutality against people of color.

The same grand jury reconvened in Waller County on January 6, 2016, to consider the actions of Texas Department of Public Safety (DPS) officer Brian Encinia when he pulled Sandra Bland over and then arrested her. Activists and supporters marched and spoke, and turned out to #sayhername. Late in the afternoon, special prosecutors announced an indictment of perjury against Encinia for falsification of a police report. DPS then indicated that it had initiated termination proceedings against the state trooper. (Encinia turned himself in to Texas Rangers on Thursday, January 7, but posted bond at Waller County Jail shortly after booking. In response, Geneva Reed-Veal commented: “To charge this guy with a misdemeanor, are you kidding me? . . . I’m angry, absolutely . . . That’s not justice for me.”) Outside of the Waller County Courthouse while special prosecutors made an announcement flanked by members of Waller County Sheriff’s Department, protesters continued to voice frustrations about the case, question the lawyers, and document the substantial law enforcement presence in the area. That presence intended to stoke fear in Waller County, and included the tactic of hired private security to conducted surveillance on protestors. Later, supporters gathered at the site of Sandra Bland’s arrest just off the campus of Prairie View A & M University along FM 1098—now known as Sandra Bland Parkway—to proclaim solidarity and reflect on the day’s events.

These events were signature moments in the Sandra Bland movement thus far. But they were not the only wintertime developments in the case. On December 17, 2015, at a hearing in Houston about the wrongful death lawsuit filed by Sandra Bland’s family, federal judge David Hittner set a trial date of January 23, 2017. The Texas Ranger report about Sandra Bland remains vital to the future of this case as does evidence from the Prairie View Police Department, both of which at the time of this post have not been made public. Geneva Reed-Veal, among others, has demanded the release of the Texas Ranger report. At the hearing, Judge Hittner threatened to “pry” the Texas Ranger report from the State of Texas, and the DPS and Encinia have attempted to stop the civil lawsuit. While local and national press covered the December hearing, most accounts, except Houston reporter Cindy George who Storified her tweets from the hearing, failed to mention the many people who turned out in large numbers to “pack the courtroom” and otherwise demonstrate support and solidarity with Bland’s family and friends. Hundreds gathered inside and outside of the federal courthouse, and long lines waited in the hallway to enter Hittner’s courtroom for the hearing. In addition, as I made my way to and from the hearing, the blocks surrounding the courthouse crawled with members of the Houston Police Department as well as Department of Homeland Security officers.

While December and January have witnessed key legal developments in the case of Sandra Bland, several very important items of note should receive sustained attention as we continue to ask #WhatHappenedtoSandraBland.

First, in Chicago Magazine reporter Bryan Smith published a substantial biographical profile of Sandra Bland titled “An American Tragedy.” The story covers Bland’s visit to Waller County in anticipation of working at her alma mater, and it offers rich and stirring details of her life and family history in Chicago. “Fully understanding the depth of [the Bland family’s] pain—and of the tragedy itself—requires far more than digesting a few sound bites on CNN,” Smith wrote. “It requires a nuanced look at the real woman behind the headlines and at how a heartbreaking combination of factors years in the making—racial, cultural, intimately personal—collided devastatingly in the waning light of a late afternoon on what was once an unremarkable stretch of road in Texas.” While the well-known Sandy Speaks videos humanize Bland and keep her voice alive, Smith’s story adds an equally compelling human portrait of Sandra Bland.

Second, The Nation published a major piece by veteran reporter Debbie Nathan on the vicious and unfortunate ways that Texas rakes in money from traffic tickets and court costs and fees, not unlike the over-policed municipalities that surround Ferguson, Missouri, that the film “Ferguson: A Report from Occupied Territory” documented. “The worst place in Waller County to be driving is probably where Bland was stopped—the little town of Prairie View, with its 6,000 overwhelmingly black residents and 8,000 overwhelmingly black students,” observed Nathan. “When it comes to local revenue, the place is a cash cow—a cow of color.” Nathan’s article, “The Real Reason Sandra Bland Got Locked Up,” connects the dots between law enforcement, the policing of Black bodies, and state and county budgets.

Finally, in early January, friends, scholars, and supporters of Sandra Bland launched a web site: SandySpeaksOn.com. It names the “Sandra Bland Movement” through hashtag activism, local organizing events in Texas, and educational projects such as the Sandra Bland Social Justice Scholarship at Prairie View A & M. The site also presents opportunities for student involvement, a creative arts and social justice organization called The Shout, educational resources through #WallerCountySyllabus, and a list of public events in the Houston area. “The goal is to let people know that while Sandy is no longer here, nonetheless she has sparked a positive and powerful movement,” the site reads, “a movement that focuses on #BlackLivesMatter, discusses difficult topics like white privilege and police brutality, and encourages people to step up and change the world.”

The case of Sandra Bland is far from over, not just because #Sandystillspeaks, but also because #SandySpeaksOn, not least through the new Sandra A. Bland Diversity Institute in Chicago (see this video as well). Sandra’s mother continues to speak about the case, most recently in a feature interview on Ebony.com. Bland’s sisters forge ahead with their voices as well. Engaging a long standing tradition of internationalizing Black freedom struggles, Shante Needham recently spoke before the UN Working Group of Experts on People of African Descent, currently on a fact-finding trip in the United States. And in an interview with City Paper, Sharon Cooper remembered Sandra as “unapologetically confident” and encouraged supporters and advocates to be “intellectually vocal” for justice.  Moreover, on December 22, 2015, Congresswoman Shelia Jackson Lee from Houston, along with the Congressional Black Caucus on January 13, 2016, demanded a Justice Department investigation into Waller County and the case of Sandra Bland, not unlike the previously stated demands of Sharon Cooper. As journalists continue to report the story and activists capture key moments in time on social media, scholars here at the blog and elsewhere can utilize research skills and multiple methodologies to document the past as we reflect on our collective present. Here I’m reminded of the late Manning Marable’s research suggestion about “multidisciplinary methodology” along these lines in his book Living Black History: How Reimagining the African-American Past Can Remake America’s Future.

In the interest of more “living Black history,” look for additional posts on the subject in the coming months, starting with the official unveiling of #WallerCountySyllabus later this year. Today’s post ends with the words of Sandra Bland herself in a newly released Sandy Speaks video recorded on Martin Luther King Day in 2015. #SandyStillSpeaks here.