loading...
By Patrick Rael January 29, 2016 Comments Off on Book Review: Nat Turner and the Rising in Southampton County

Last April, I wrote a post for this blog, entitled “Why did Nat Tuner ‘confess‘?” I argued that Turner’s goal in permitting himself to be captured, and his words to be recorded, was nothing less than to continue the campaign of terror that he had begun with the sword.  Later that summer, a book made it into my hands that offered an extended examination of the Turner revolt.  I was eager to see if the book spoke to my question, and gratified to find that I was not shooting in the dark.  In short, nobody has put meat on the bones of this interpretation more effectively than David Allmendinger.  I am pleased to offer this review of that fine book.

For generations, Nat Turner, the prophet of Southampton County, Virginia, has challenged historians to weave a coherent story from thin strands of sparse source material. This has resulted in seamless narratives, such as Stephen Oates’s Fires of Jubilee (1975), as well as magisterial furor, such as that occasioned by the novel that William Styron titled after the rebellion’s key source, The Confessions of Nat Turner (1967). The real Turner has remained obscure, however. Kenneth S. Greenberg’s fine collection of essays, Nat Turner: A Slave Rebellion in History and Memory (Oxford, 2004) went far in offering correctives. But, as Charles Burnett ably presents in his film Nat Turner, A Troublesome Property (2003), Turner has always been a malleable figure, used for a wide range of purposes from his own day into the present. 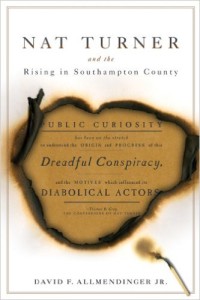 The culprit in these conflicting accounts has been a general paucity of sources, compelling historians to rely on the vexatious Confessions. More than any other scholar, David F. Allemendinger, Jr. has remedied this problem. In Nat Turner and the Rising in Southampton County, he offers the most detailed comprehensive account of the Turner uprising’s people and sources. His meticulous research into unpublished local records (census manuscripts, probate records, land titles, etc.) helps him make a strong case for the basic veracity of the Confessions. He corroborates key points with other testimony, and fills in critical gaps. In the process, he offers a compelling interpretation of the uprising’s motives and meanings.

The backstory of the rebellion lay in the late eighteenth century. Whereas in the wake of the American Revolution many tidewater planters foresook slavery and emancipated their human property, the grandfather of Nat Turner’s owner was among those who remained dedicated to the institution. Ensuing years witnessed a growing network of tidewater family alliances sewn together through credit relationships built on their primary source of wealth: the collateral represented by slave property. The enslaved themselves witnessed their owners’ ever-deepening commitment to the institution. They saw family members scattered upon the death of owners, given as dowries, disposed of to settle estates, or born into the institution — all with blatant disregard for family ties among the enslaved. Turner himself may have been motivated partly by forcible separation from his wife and child, while others in his band had personal axes to grind with the local whites who wound up being their first targets. Through meticulous examination of family legal connections, Allmendinger argues that one of the key motives for the insurrection lay in the slaves’ remarkable awareness of their owners’ legal machinations, and consequently in their broken hopes of individual emancipation and the family lives freedom would have made possible.

In his central thesis, Allmendinger asserts another level of motivation — one he associates with Turner’s “developing theory of how to overturn slavery” (p. 96). Turner and his men “saw themselves as mounting a revolution” (p. 97), he argues, detailing the rebels’ remarkably coherent plan of attack. While members of the group initially set their sights on families implicated in their own enslavement, they quickly broadened their scope, suggesting “that Turner’s men were taking aim at slavery itself” (p. 117). (Turner himself was once whipped for “saying that blacks ought to be free, and that they would be free one day or other” [p. 237].) The insurrection’s path from the countryside toward the town of Jerusalem broadened into an increasingly impersonal swath of destruction. Turner shifted to attacking active slaveholders and local magistrates while exempting those less clearly associated with the institution; he had turned from necessarily indiscriminate slaughter to an increasingly selective political action.

The evidence of Turner’s thinking is understandably thinner, but Allmendinger’s case is compelling. Turner seems to have premeditated a plan to secure Jerusalem, recruit more rebels, and turn to a military confrontation with authorities — in short, an insurrectionary war. Of course, the insurrection failed. At Parker’s field, more than two dozen slave rebels fell back in the face of a hastily mustered white militia, marking the insurrection’s high tide. It was shortly after this, Allmendinger argues, that Turner’s thoughts “turned from deeds to words, from revolution to the idea of terror” (p. 198). At only a few moments is this interpretation strained, as when Allmendinger reasons that the killing of the infant in the Travis house was intended “to leave a sign for those who would later enter the house, announcing that slaveholding was a capital crime that corrupted blood and for which there could be no plea of innocence” (p. 169). But the larger point holds: Turner purposed not simply to avenge personal grievances, but to broadcast a message of terror throughout all of slavedom.

According to Allmendinger, the very secrecy that had permitted Turner to launch his revolt before its inevitable betrayal (the knells of the earlier Prosser and Vesey conspiracies) also prevented it from effectively raising a broader following, or developing the discipline required to hold the field against armed whites. The staggering nerve of Turner’s plan actually helps the author explain the “terror” motive’s slight appearance in the historical record. In the wake of the rebellion, Thomas Grey (Turner’s jailhouse amanuensis) and white officials deliberately downplayed the significance of the revolt in a desperate effort to reassure themselves that such an outrage could never recur. 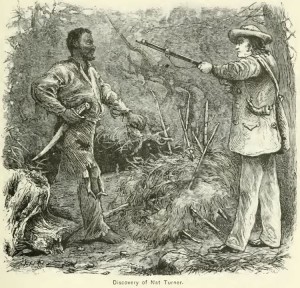 Allmendinger’s approach also permits him to resolve the central puzzle raised by the rebellion’s aftermath: why did Turner surrender, and why did he “confess”? As local magistrates, investigators, and jurists sought desperately to convince themselves that the rebellion had resulted from the mind of a fanatic rather than the brutal institution itself, Turner parlayed his military failure into rhetorical victory. His revolution had collapsed, but its message — that the cost of slaveholding was eternal insecurity — might continue on through his words. His means were imperfect, for Thomas Gray worked directly against this purpose. But Turner had done his damage, and in the weeks that followed found even Gray joining those who called for enhanced legal constraints on blacks.

Here, Allmendinger’s tight focus on the rebellion itself prevents him from exploring the ways that Turner’s actions fed into national dialogues over slavery and abolition. But his conclusions support the contention that Turner’s actions played a critical role. Virginia itself debated a measure to end slavery and expel blacks, which failed to pass. Reverberations echoed throughout the slave codes of southern states, as legislatures enacted new measures to limit slave learning and slave communication. Even free blacks, often viewed as accomplices to conspiracies, felt the sting. And in the free states, a new breed of radical abolitionist picked up Turner’s clarion call. Figures such as William Lloyd Garrison distanced themselves from Turner’s violence, but used his actions in almost exactly the way Turner intended — as evidence that slavery inevitably generated violent resistance, and that the safest (as well as the most just) course lay in immediate emancipation.

David F. Allmendinger, Jr. has written the definitive account of Nat Turner’s revolt. Those interested in this critical moment in the history of slavery in the United States may find the detail in the volume dense going, but no one has done more to corroborate and sync the details, nor to illuminate Turner’s inspirations and goals. Nat Turner and the Rising in Southampton County is a model of historical methodology, and goes further than any other previous work in helping readers understand Turner’s motives and meaning.