At Carnegie Hall on February 23, 1964, Lorraine Hansberry spoke at a memorial tribute event dedicated to W. E. B. Du Bois, who had died the previous August in Ghana. Hansberry’s speech, published in the Freedomways anthology Black Titan (1970), considered Du Bois’s legacy, which she said “tells us to honor thought and thinking; to keep always as our counsel distinguished scholarship and hold sacred strong and purposeful art; such as beautifully crafted and humanly involved writing.” In reply to Hansberry’s counsel to “hold sacred strong and purposeful art,” I wish to consider briefly the subject of W. E. B. Du Bois and poetry–Du Bois’s poetry itself, including unpublished verse; and poetry about Du Bois.

As his books and other writings readily document, Du Bois believed deeply in the power, possibility, and beauty of language, and enlisted art as a tool in his life-long insurgency against white supremacy. Relatedly, the volume Du Bois in Our Time, and its companion website offers many perspectives from which to think about Du Bois and aesthetics. Scholars such as Ronald Judy and Robert Gooding-Williams have explored Du Bois’s aesthetics. Forthcoming collections by Nicholas Bromell and Monique Leslie Akassi will continue to texture this rich topic.

On the occasion of his 150th birthday we should remember that Du Bois was a poet. Keith Byerman comments in Seizing the Word: History, Art, and Self in the Work of W. E. B. Du Bois (1994) that Du Bois’s poetry prioritized “the truth content of literature” (p. 108) which resulted in “putting words together in certain conventional sound and image combinations” (p. 110). Arnold Rampersad, on the other hand, points to Du Bois’s “poetic reverence for the word” (ix) in The Art and Imagination of W. E. B. Du Bois (1990). Such artistic obsession translated into centering the imagination as a vehicle not only for self-expression, but also for creatively resisting racism and white supremacy. Rampersad writes that Du Bois’s poetry “gave voice to his private thoughts” (p. 109) and spotlighted “the depth of his soul-searching and the dignity of his motives” (p. 109). He further states that Du Bois’s creative work “extend[ed] the range of his public expression” (104).

Du Bois wrote verse over the course of his entire life. A few of his most well-known poems include “A Litany of Atlanta” (1906), “The Song of the Smoke” (1907), “My Country ‘Tis of Thee” (1907), and from his later years “Ghana Calls” (1962). As a liberal arts intellectual, Du Bois routinely included poems in his narrative books. Darkwater (1920) exemplifies most superbly this kind of aesthetic arrangement where, as historian V. P. Franklin writes in Living Our Stories, Telling Our Truths, poetry works as a form of autobiography. Du Bois featured the Atlanta poem as “A Litany at Atlanta,” for example, as well as “A Hymn to the Peoples,” written for the First Universal Race Congress in 1911. Many of these poems, along with others like “The United Nations” (ca. 1944-45) and “The Rosenbergs” (1953) appear in the anthologies of David Levering Lewis and Eric J. Sundquist. The fullest collection of Du Bois’s verse is Creative Writings by W. E. B. Du Bois: A Pageant, Poems, Short Stories, and Playlets (1985), one of the many Du Bois volumes that Herbert Aptheker edited. Echoing Rampersad, Aptheker contended that “Du Bois’s poetry welled up from his sense of outrage at oppression and injustice” that “always conveys an intensity of emotion, and at its best, has a potent impact” (xi). In Black Titan (1970) readers encounter “Suez” (1956) and “War” (1952), pieces also printed in Selected Poems, a rare Ghana Universities Press book assembled by Shirley Graham Du Bois.

A significant amount of Du Bois’s poetry remains unpublished, however. Thankfully it is readily available in the digital collection of his papers at UMass. Drafts of poems such as “The First Snow” (1890), “Striving” (1892), and “A Folk-Song” (1896), for instance, offer literary windows into the musings of Du Bois’s early days as an emerging intellectual and scholar. A draft of “The Passing of Douglass” (1895) is a particularly striking tribute to the freedom fighter’s life and influence. Du Bois’s early poetry contextualizes, either for scholarship or for the classroom, his published poems in Horizon and The Crisis, and much later in Masses & Mainstream, among other outlets. While on balance Du Bois’s poetic output is smaller compared to other genres in which he wrote, the archive of his published and unpublished poems remains worthy of attention not least because it bears literary, intellectual, and cultural witness to his creative attempts at documenting the ordinariness of Black life and lettering liberation to eradicate white supremacy.

The second way I wish to think about Du Bois and poetry is to examine verse composed about him. Two historical moments produced powerful literary responses: the federal anticommunist repression he experienced in relation his 1951 McCarthy trial, and the occasion of his death in 1963.

After Du Bois’s February 1951 indictment, American poet Eve Merriam sent him “For W. E. B. Du Bois.” Using nature imagery, she depicted his politics as a “freedom tree” and a “topmost tower of peace,” and extolled a devotion to justice that was no match for “the lyncher’s knife nor the bayonet greased by gold.” Following Du Bois’s November 1951 acquittal, Pacifica radio journalist and activist William Mandel sent him “My Children Thank You.” In rhymed verse Mandel wrote of how the U. S. government “dragged” Du Bois “to court, and locked the door/His wrists they bound in iron bands/because they feared the mighty hands/that wrote in verse and prose and law.” He concluded with communitarian conviction: “DuBois is free! And that, my children, means freedom for me.” As some of Du Bois’s late career writings state, such creative gestures that recognized his freedom fighting sustained his spirits under the suffocating weight of federal scrutiny. Interestingly, while it does not address anti-blackness and anticommunism like Merriam and Mandel’s pieces, Dudley Randall’s well-known “Booker T. and W. E. B.” (1952) also appeared at this time.

In the wake of Du Bois’s passing, Lytt Gardner wrote “On the Death of Dr. W. E. B. Du Bois,” noting the “fitting irony” that he died on the eve of the March on Washington. Eugene Perkins’s “In Memory of Du Bois” called the black scholar a “Titan” who “stood tall as the pyramids” and “stirred mountains.” Similarly, in an untitled piece in Black Titan, poet Elma Stuckey praised “the fierceness of his truth” and imagined Du Bois’s freedom dreams as “a fuse exploding into light.” Embodying what Hansberry surely meant by “strong and beautiful art,” these legacy poems aesthetically passed freedom’s torch to the next generation.

Du Bois continues to stir poetic imaginations today. In hip hop, Sho Baraka’s concept album Talented 10th (2013) named Du Bois while calling forth double consciousness in “Jim Crow” and addressing gender justice, class, police violence, racism, and religion, among other topics, throughout the tracks. The album cover’s aesthetics visualize “Talented Xth” with textual portions from “Talented Tenth” as background. Similarly, Timothy Welbeck’s recent record No City for Young Men (2017) features a track titled “The Souls of Black Folk.” Welbeck nods to Black women’s history and identity in “May You Ever,” and acknowledges Booker T. Washington in “Up from Slavery” and Carter G. Woodson in “The Mis-education” while bookending the album with a “Forethought” and “Afterthought.” 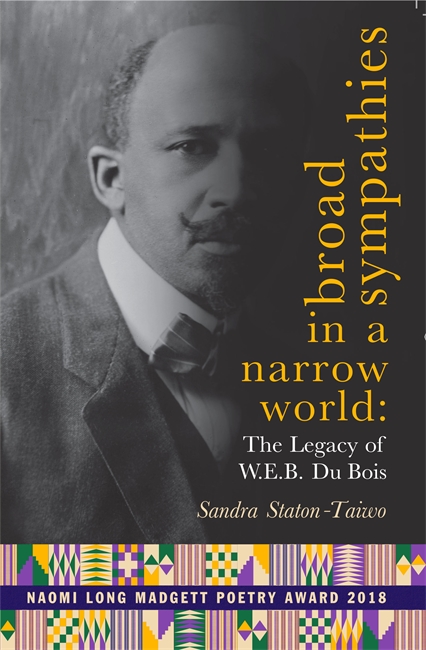 Jim Murphy’s 2009 poem “Spectacles of 1906” addresses the Atlanta Race Riot of that year, and in Crave Radiance (2010) Elizabeth Alexander’s “Yolande Speaks” offers harrowing verse about the complicated relationship between Du Bois and his daughter Yolande. Tara Betts’s inventive “The Seventh Son” (2015) pays tribute thematically to The Souls of Black Folk and embodies the Kwansaba poetic form pioneered by Eugene Redmond.[I thank Tara Betts for sending me her poem, and for introducing me to Kwansaba in 2016]. In 2015, Evie Shockley’s “du bois in ghana” recognized his life-long, diasporic, and global work in the service of Black liberation. We should also recognize the poet Clint Smith’s launch of #DuBoisBars, a collection of crowd-sourced Twitter poems created in 2016. Smith counts Du Bois as a major intellectual influence. He started the hashtag somewhat playfully with a reference to Du Bois and Booker T. Washington, “Booker T you a fool, the Atlanta Compromise was trash, I’m the man you can’t mess with my handlebar mustache,” but it quickly turned into a fascinating digital archive of unique poetry about Du Bois. Finally, Sandra Staton-Taiwo’s Broad Sympathies in a Narrow World (2018) promises fruitful creativity inspired by Du Bois’s life and work.

Commemorating the sesquicentennial of Du Bois’s birth provides a timely opportunity at collectively re-thinking the intellectual and cultural possibilities of assembling poetry alongside of Du Bois and Du Bois alongside of poetry. This is not to over-determine the perspective of Du Bois-as-poet. It is to simply suggest that in this historical moment we draw more on poetry’s power in ways that listen to how Du Bois’s voice—and artists and poets responding to Du Bois’s voice—can speak to the times in which we live.