loading...
By J. T. Roane June 5, 2019 Comments Off on Occupied Territory: A New Book about Policing and Black Chicago

This post is part of our blog series that announces the publication of selected new books in African American History and African Diaspora Studies. Occupied Territory: Policing Black Chicago from Red Summer to Black Power was recently published by the University of North Carolina Press.

The author of Occupied Territory: Policing Black Chicago from Red Summer to Black Power is Simon Balto, assistant professor of History and African American Studies at the University of Iowa. Occupied Territory is his first book. His writing has appeared in numerous other scholarly and popular outlets, including the Journal of African American History, Labor, the Journal of Urban History, Time, the Washington Post, and The Progressive, among many others. Professor Balto earned his Ph.D. in History from the University of Wisconsin in 2015, where he also earned a Master’s Degree in African American Studies. He has been the recipient of grants and fellowships from the National Endowment for the Humanities and the Mellon Foundation, among others. Follow him on twitter @simonbalto. 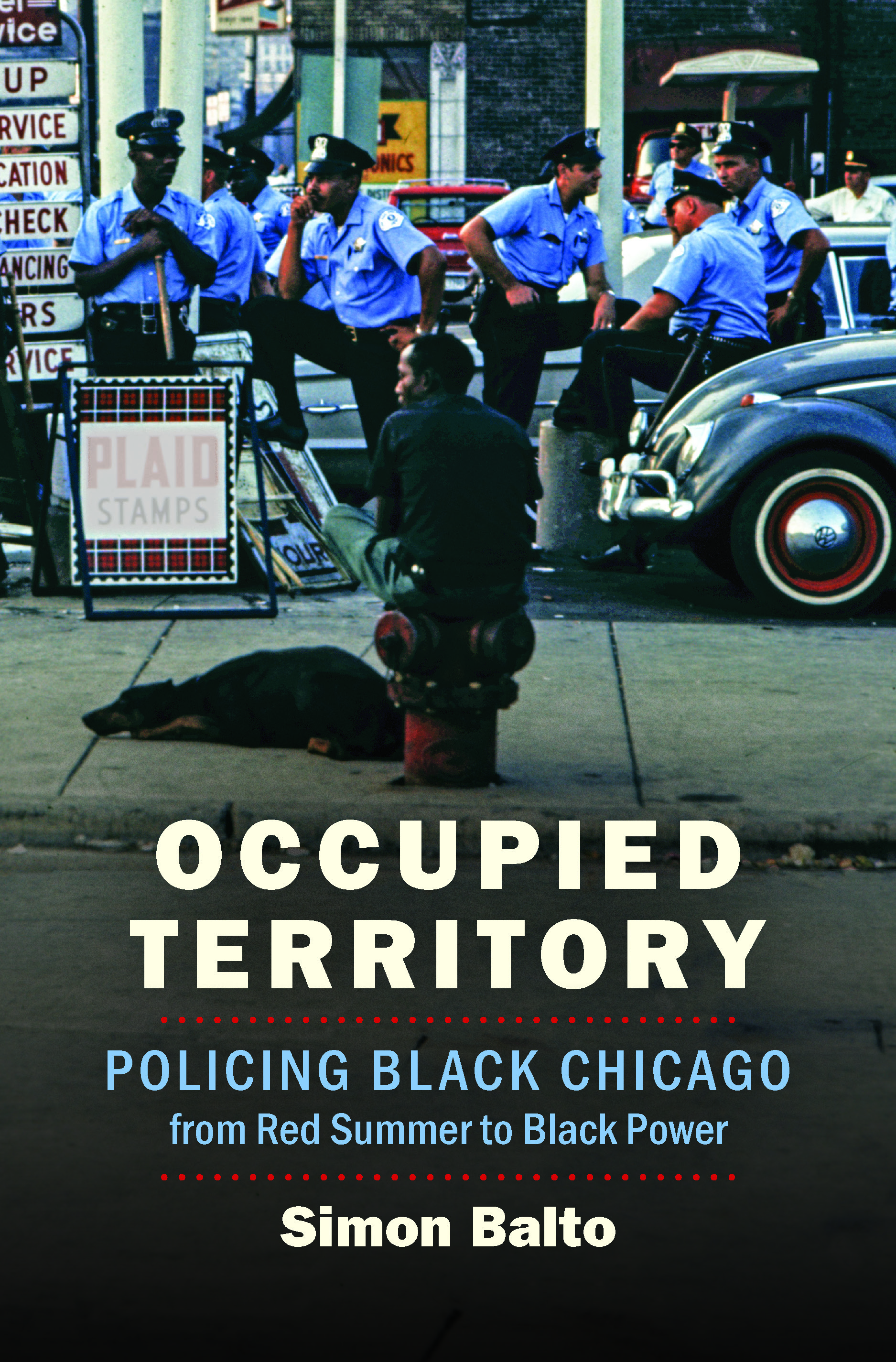 In July 1919, an explosive race riot forever changed Chicago. For years, Black southerners had been leaving the South as part of the Great Migration. Their arrival in Chicago drew the ire and scorn of many local whites, including members of the city’s political leadership and police department, who generally sympathized with white Chicagoans and viewed Black migrants as a problem population. During Chicago’s Red Summer riot, patterns of extraordinary brutality, negligence, and discriminatory policing emerged to shocking effect. Those patterns shifted in subsequent decades, but the overall realities of a racially discriminatory police system persisted.

In this history of Chicago from 1919 to the rise and fall of Black Power in the 1960s and 1970s, Simon Balto narrates the evolution of racially repressive policing in Black neighborhoods as well as how Black citizen-activists challenged that repression. Balto demonstrates that punitive practices by and inadequate protection from the police were central to Black Chicagoans’ lives long before the late-century “wars” on crime and drugs. By exploring the deeper origins of this toxic system, Balto reveals how modern mass incarceration, built upon racialized police practices, emerged as a fully formed machine of profoundly antiBlack subjugation.

The last several years have seen important histories written about the rise of mass incarceration in the United States, but what has been missing are studies that deepen our understanding of American policing. Simon Balto offers a much-needed history of policing in Chicago, clearly articulating the connection between the Chicago Police Department’s record of racism and abuse and its contemporary crisis of police brutality.–Keeanga-Yamahtta Taylor, author of From BlackLivesMatter to Black Liberation

Simon Balto: I grew up in a pretty remote, rural part of the Midwest in a county that was probably 98% white. This meant that my experiences with and immediate observations of racism when I was young were primarily rooted in interpersonal attacks, not grounded in systems. We lived in such relative isolation and the area was so punishingly white that while I experienced racism, there weren’t systems (at least that I could then detect) organized to target and disadvantage people of color. There wasn’t a police department with jurisdiction over our home. The county sheriff’s office that had jurisdiction was located over a half hour’s drive away and wasn’t an obvious presence in my daily life.

I moved to Chicago in 2007 as a twenty-three-year-old, then, almost totally naïve to how systematic racist harm was produced and reproduced beyond things I had studied as an undergrad. Chicago was my teacher. I sometimes tell people that before I was a historian, I was a walker. When I’m in a new place, I walk it and watch it and think about it. So in Chicago. I lived in Rodgers Park. I worked in a relatively gilded Evanston neighborhood, cooking for Northwestern students. I took night classes in the Loop. I traveled the city and observed it mostly by walking, sometimes from the windows of the El. One of the things I noticed in the wandering was how the police’s presence and function appeared fundamentally different from place to place. In racially and economically diverse Rodgers Park (where policing looked different even from block to block) it looked different than how it looked in the Loop, which was different than it looked in Woodlawn, which was different than it looked in the fortress atmosphere of Hyde Park. It was clear to me that racism and economic inequality were driving those differences, but I lacked the language to understand and articulate how and why.

So when I landed in graduate school in 2008, even though it was years before the murders of Trayvon Martin and Michael Brown, before #BlackLivesMatter and #SayHerName, before Ferguson and Baltimore, one of the things I was thinking about was how to make better sense of racialized police repression. That’s ultimately how I ended up writing this book—trying to make sense of those things that I first started thinking about more than a decade ago while walking the streets of Chicago.