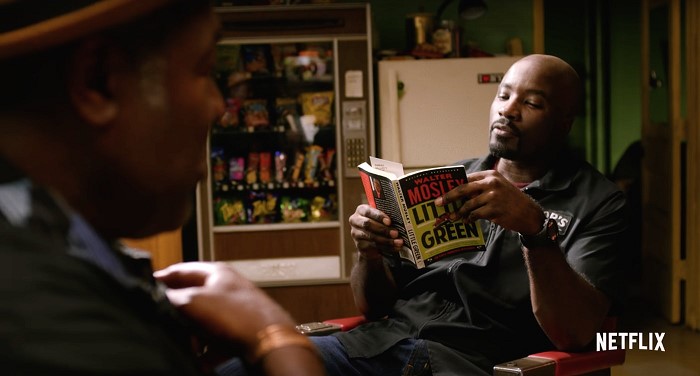 Marvel’s Luke Cage debuted on Netflix on September 30, 2016. One day after its appearance on the streaming service, Netflix’s servers crashed because so many people flooded the site. The mere fact that Luke Cage crippled Netflix for a few hours after its debut highlights the importance of this show in an era dominated by social media. While Luke Cage’s sheer invincibility and his place within the Harlem community speaks to our current social milieu, the show, along with the first few issues of the comic that appeared in 1972, serves as a pop culture classroom that provides a history of African American letters in the latter part of the twentieth century that may not necessarily appear within the hallowed halls of academia. Tara Betts has collected a list of literary references in season one of Luke Cage on Black Nerd Problems.  She notes numerous books, including the scene when Luke Cage sits on his bed and picks up Ralph Ellison’s Invisible Man (1952) in “Moment of Truth.” As a cornerstone of the African American literary tradition, Ellison’s novel does not come as a shock in a show that not only references literature but also history and culture as well. However, the show quickly takes viewers down another path in “Code of the Streets,” guiding the audience through a literary history that encompasses more than Ellison and the canonical authors that viewers would most likely encounter in the classroom.

As Cage sits in a barber chair reading Walter Mosley‘s Little Green (2013), an Easy Rawlins mystery, he tells Pops, “I just never got into Donald Goines.” Through this simple statement and his reading of Mosley, Luke sets up the conversation that ensues between him and Pops, an exchange that draws the viewer into the history of African American pulp and crime writing. After commenting on the authors themselves, Pops expressly states, “Goines invented Kenyatta. The best black hero this side of Shaft.” Cage asks whether or not Pops thinks Kenyatta is better than Mosley’s Rawlins. Pops does not dispute the importance of Rawlins and simply responds, “Kenyatta is my favorite. Took the fight to the man, in the streets. By hisself. Just like somebody else could if he wasn’t sweeping hair and washing dishes.”

The dichotomy between Kenyatta and Rawlins may appear like nothing more than a barbershop debate between two friends, but in the context of the series-and the literary history that it presents-the discussion becomes so much more. For one, Luke Cage, at the beginning of the series, expresses a reticence about his role in protecting the community, much like Easy Rawlins and his questioning of the job he chooses to do for DeWitt Albright in the first mystery, Devil in a Blue Dress (1990). As the series progresses, Cage becomes more like Goines’ Kenyatta, fighting to rid the community of criminal elements such as Cottonmouth and Diamondback, who prey on the residents of Harlem for their own personal gain.1

Along with Cage’s movement from Easy Rawlins to Kenyatta, the exchange in the barber shop links the Netflix series and the original comics from 1972 to the noir and hardboiled tradition in African American letters from Chester Himes through Goines and Iceberg Slim to Walter Mosley and beyond. In America Is Elsewhere: The Noir Tradition in the Age of Consumer Culture (2013), author Erik Dussere argues that the “black authenticity,” which arose during the 1960s, is related to the history of “noir authenticity,” a history that presents the urban and ghetto space as authentic, in contrast to the suburban consumerist space.

Additionally, Dussere notes a move toward novels and films, which highlight counter conspiracy narratives that “eschewed the passive mapping of conspiratorial networks in favor of active resistance.” Luke Cage emerges during this period, albeit with a majority white creative team (except for the inker Billy Graham). Cage becomes a “hero for hire” who fights back against crime in Harlem; unfortunately, he does not provide an “active resistance” against racism. In the introduction to the Marvel Masterwork’s collection of Luke Cage: Hero for Hire 2 issues 1-16, Steve Englehart writes about the impetus for creating Luke Cage, drawing connections to the economic viability of Blaxploitation films and to Marvel’s desire to present readers with a diverse range of characters. Englehart comments on the cultural climate of the period saying,

At the time, anyone who believed in human rights was in his element. The progress that blacks made socially made for a more vibrant popular culture, and that, to focus in on why we’re here, had led to a series of films starring confident people dealing with the injustices in the world they lived in. Made on shoe-string budgets and labeled “blaxploitation,” these films nonetheless did good box office in black theatres, putting Richard Roundtree, Pam Greer, and others on the moviegoing map for anyone interested in the world around. It was a saleable genre, to whites as well as black . . . so other people decided to sell some, too. Nature of capitalism.

Englehart’s statement about the milieu that led to the genesis of Luke Cage presents the superhero’s initial appearance in between two conflicting poles. On the one hand, the apparent progress of the Civil Rights movement and the emergence of the Black Nationalist movements in the 1960s and early 1970s created social change, including changes within popular culture. On the other hand, Blaxploitation films arose out of this period, and since they put warm bodies in the seats and brought in money, Marvel saw an opportunity (for a discussion of Blaxploitation cinema during this period, see Brooks E. Hefner’s “Rethinking Blacula: Ideological Critique at the Intersection of Genres”). Thus, Luke Cage walked onto the stage.

While Luke Cage’s 2016 incarnation provides its audience with mini-lessons on African American literature and history, the 1972 version, despite its moves to create an authentic, non-stereotypical African American superhero, suffers from populating Cage’s world with the racism of popular and historical culture without any confrontation from Cage himself. After opening the series with an issue that highlights Cage’s strength, resiliency, and humanity during his origin story, issue two, “Vengeance is Mine,” sees two instances where Cage comes into contact with symbols of oppression.

The first instance occurs when Cage goes to a costume store to purchase an outfit. After trying on clothes, Cage asks the owner if he has “[a]nything left in that trunk with a little flash?” The white owner produces chains, asking Cage, “Who can relate to an escape artist’s props?” Cage looks at the man and responds simply, “Maybe me, friend . . . As a kind of reminder.” The owner proceeds to cut the chain, and Cage fashions it into a belt. Here Cage comments on the symbolic nature of the chain; however, by referring to it as only a “reminder,” one may think back to the first issue where Cage is in prison. Cage does not bring up the history of slavery, nor does anyone else. In a mass-market comic that came out during the era of Blaxploitation films and after novels like Ernest J. Gaines The Autobiography of Miss Jane Pittman (1971) and Margaret Walker’s Jubilee (1966), this scene presents a missed opportunity to comment on the history of slavery that the audience might not even catch.

The second scene referencing racial oppression in the U.S. is when Cage rents his office above a movie theater. When he enters the room, Cage encounters a blonde haired white teenager sweeping the floor. The boy introduces himself saying, “I’m Dave Griffith. My movie freak friends call me D.W. . . . After the director, y’know?” Again, Cage does not question the symbolism of the name; instead, he just asks D.W. for a tour of the space. Even though the audience may get some commentary on the chain belt, readers do not get any questioning of D.W.’s nickname, one that references the infamous director of Birth of a Nation (1915).

Based on these scenes, what do we make of the creator’s goals with the 1972 appearance of Luke Cage? As the 2016 small screen version presents audiences with engaging discussions of historical and literary topics, the 1972 version presents allusions and leaves them hanging in the air without any commentary. What does this do for an audience, especially an audience encountering a black superhero’s genesis in the Marvel universe? How should we read the 1972 and 2016 iterations of Luke Cage in relation to the noir tradition that each draws upon? These are questions that need to be explored further, especially when thinking about a character like Luke Cage who emerged during the early 1970s and has reemerged, at least on a massive scale, in the 2010s during the era of Black Lives Matter.

Matthew Teutsch is an Instructor of English at Auburn University. He maintains Interminable Rambling, a blog about literature, composition, culture, and pedagogy. He has published articles and book reviews in various venues including LEAR, MELUS, Mississippi Quarterly, African American Review and Callaloo. His research focus is African American, Southern, and Nineteenth Century American literature. Follow him on Twitter @SilasLapham.

Comments on “Luke Cage and the African American Literary Tradition”