Always bear in mind that the people are not fighting for ideas, for the things in anyone’s head. They are fighting to win material benefits, to live better and in peace, to see their lives go forward, to guarantee the future of their children. –Amilcar Cabral, West African revolutionary1

In a recent article for the Nation, journalist Juan Cole likened the crisis of contaminated water in Flint, Michigan—a largely black and poor city—to some of the daily crises of powerlessness endured by the Palestinian people. Cole argued that both populations had been deprived of basic autonomy, and that both were experiencing a form of colonialism.

One of the most striking aspects of the essay was the author’s use of the colonial analogy, the once-familiar claim that marginalized African-American communities constitute colonial possessions of the U.S. During the Black Power era of the late 1960s and 1970s, the “internal colony” theory was a central organizing principle for an assortment of black nationalists, Pan Africanists, and leftists, from organizers of the Revolutionary Action Movement to members of the Black Panther Party. The formulation helped mark the age of independence, a time when anticolonial struggles in Africa, the Caribbean, and other parts of the Third World culminated in the formation of new nation-states and powerfully shaped the discourses of African-American liberation.

Most contemporary proponents of the colonial analogy viewed “national liberation” as the answer to black America’s political, economic, and cultural subordination. After all, the great wave of post-World War Two revolutions seemed to affirm formal self-government as the essential solution to the dependency of subject peoples. But was nationhood the optimal model of black self-determination? As Wretched of the Earth author Frantz Fanon had once observed, “national consciousness” within African liberation struggles offered both a blessing and a curse, enabling the consolidation of anticolonial forces while bringing to power an elite class of managers committed to governing in its own narrow self-interest.2

During the 1960s and 70s, black American concepts of nationality proved equally contradictory. On one hand the resurgence of nationalist consciousness significantly enhanced the postwar African-American mass movement, raising questions of power and autonomy that had been sidelined amid the push for integration. The reawakening of black nationalism highlighted the strategic limitations of liberal reform and white paternal benevolence. It helped black activists transcend the Cold War framework of “race relations,” enabling them to recognize racism as a system of global conquest and inspiring them to forge new identities and theories of resistance. Paired with Pan Africanism, a dominant tendency of the Black Power movement, black nationalism encouraged dissidents to link the subjugation of African-American communities to larger processes of occupation and underdevelopment.

But the new black nationalism also contained serious flaws. If formal independence had failed to bring genuine freedom and democracy to the masses of the Third World, national sovereignty proved equally problematic as a framework for African-American organizing. Regardless of the color of its progenitors, a nation-state disciplines and regiments its subjects, subordinating to the national mission more organic notions of community and identity. Pan African nationalist institutions in the U.S. (from Afrocentric schools to activist cadres) occasionally mirrored the hierarchies and absolutism of the ruling parties and regimes upon which they were modeled. Attempts to “govern consciousness” and to control African-American working-class behavior replicated the patriarchal, centralized authority of postcolonial states, elevating the prerogatives of the prospective black nation (and its would-be administrators) over the aspirations of the putatively governed. “Most people are not rational, or they are just rational,” intellectual and organizer Amiri Baraka (LeRoi Jones), declared in 1969, explaining Pan African nationalism’s tendency to regulate the black rank and file. “They function on a less than conscious level. The reason you have to teach people values, values, values is so they will do things that are in their best interest without trying to reason about it.”3

Thankfully, there emerged a more egalitarian framework with which to conceptualize a “postcolonial” African-American future. In the early 1970s, solidarity with armed struggles against the remaining outposts of European colonial rule in Southern Africa increasingly shaped Pan African nationalist politics in the U.S. As black polemicists shifted their attention from independent nations in the developing world to active guerrilla campaigns against white minority rule, the concept of “liberated territories” began to rival the motif of nationhood as a touchstone for African-American political consciousness.

Liberated territories were those rural sites in places like Angola, Zimbabwe, Mozambique, Namibia, and Guinea-Bissau that insurgents had wrested from the grasp of colonialists and white settler regimes. Similar zones in South Vietnam and other lands had long captured the imagination of the antiwar activists associated with the multiracial New Left. Recognition of the areas and their significance grew among black internationalists after fall 1971, when key African-American Pan Africanists, including Owusu Sadaukai of North Carolina’s Malcolm X Liberation University and New York City lawyer and civil rights worker Robert Van Lierop, visited liberated portions of Mozambique and spent several weeks embedded with local guerilla forces. This act of solidarity enabled the production of A Luta Continua, Van Lierop’s 1972 documentary film about the Mozambican struggle.

A Luta Continua helped raise African-American awareness about the fight against Portuguese colonialism, as did U.S. visits by Amilcar Cabral (respected leader of Guinea-Bissau’s anticolonial struggle) and the 1972 creation of annual African Liberation Day demonstrations in the U.S. Well-publicized accounts of life inside rebel-held swaths of Southern Africa further established the concept of liberated areas as an important archetype of black self-determination. No longer simply an abstract metaphor, the territories assumed deeper, concrete meaning in many progressive African-American circles.

In published testimonies about his experiences traversing the Mozambican interior with members of that country’s liberation front, Sadaukai explained that the fighters were laboring to emancipate “not just their land but the man on it.” He recalled how the guerrillas had created makeshift schools and hospitals for the benefit of poor villagers, including peasants who had lacked access to basic services under colonialism. Sadaukai described not the workings of a military dictatorship but the efforts of an armed cadre closely integrated with the lives of ordinary civilians and devoted to their dignity and well-being. Screenings of A Luta Continua reinforced this perspective. The film, which traveled the circuits of black consciousness groups in the U.S., depicted Mozambique’s guerrilla forces as a courageous people’s army, a body that viewed revolutionary leadership as a sacred responsibility rather than as a rank or a privilege.4

The political model of liberated territories promised to expand the creative possibilities of black radical praxis in the U.S. Viewing African-American communities not as colonies awaiting national liberation but as potential zones of insurgent democracy required a fundamental theoretical and tactical reorientation. Rather than attempt to forge a disciplined political vanguard (long a preoccupation of leftist cadres), grassroots organizers could immediately begin laying the practical foundations of the new society, as rebel fighters were doing overseas. Rather than imagine a national bureaucracy, black American liberationists could embody the democratic social relations of a radically just community. Rather than instill loyalty to an unborn nation, indigenous black institutions could empower children and young adults to craft a future of their own design. Rather than claim an absolute revolutionary mandate, human rights workers could wage a permanent struggle to win the trust of the people. 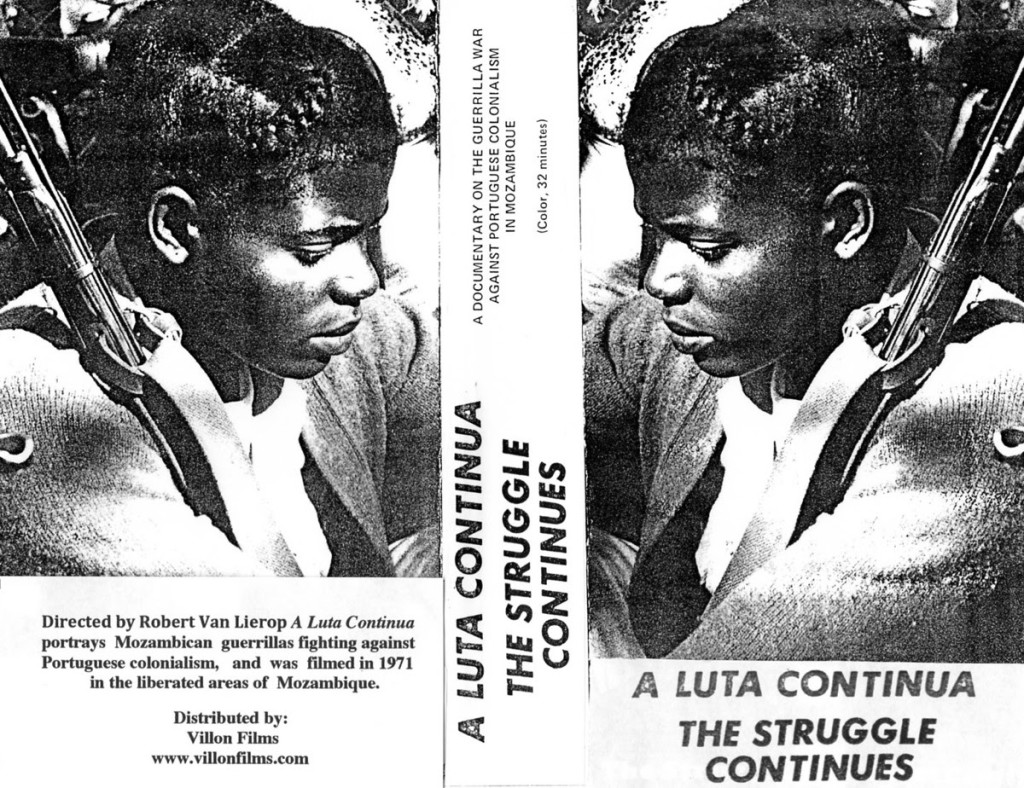 For African-American exponents of the liberated zone concept, the reconstruction of power relations was paramount. Leaders would fight alongside the popular masses, taking pains to avoid reproducing the dominant order, and prioritizing the improvement of quotidian life over the ascent to formal self-rule. Gender roles would dissolve, enabling women and men to wield equal authority and perform identical tasks in the struggle. Revolution would be understood not as a bid for power or control but “as a dynamic process of constant change,” the definition advanced in A Luta Continua. Community activists would strive to creatively address the everyday needs of workers and the unemployed. They would do so not to fashion islands of autonomy within a racist empire, but to demonstrate on a modest scale the structural transformation that the whole society needed to undergo.

In the liberated territories of black neighborhoods, the social value of all labor would be honored and rewarded. Decision-making would occur in people’s assemblies. Changes in the status and material realities of the poor and the oppressed would serve as critical measures of revolutionary progress. Socialism would be understood not as an advanced form of statecraft but as acts of self-organization that put oppressed people in command of their lives.

Many grassroots black formations pursued elements of this vision during the 1970s, from liberation schools to urban survival programs to radical feminist groups. If “national liberation” remained a dominant Black Power discourse, an array of political actors within the movement sought more humanistic models of social reconstruction and revolutionary practice. Today, strands of their creative utopianism (an approach not to be confused with political escapism) have resurfaced in autonomous struggles like Black Lives Matter. Young activists are again creating alternative institutions, from communal urban gardens to agricultural cooperatives, designed to prefigure a more humane economy. Many are doing so based on a democratic worldview that explicitly rejects patriarchy, heterosexism, and monopoly capitalism. They are calling for the eradication of white supremacy as well as the basic transformation of social and economic relations, something that neither the postcolonial world nor the post-segregation era has managed to deliver. Armed with their own revolutionary frameworks, they are struggling to reclaim their humanity and build a new society within the shell of the old.