In his 2010 CD Sophomore Slump, the Jackson, Mississippi-based artist Skipp Coon rapped in the opening track “James,” “From where I stand, freedom is more important than fame” and asked, “Who want to be James? I won’t stop until my project windows can see the flames.” A clear and creative reference to James Baldwin’s 1963 book The Fire Next Time, Skipp Coon again named the writer, activist, and playwright in his 2014 release, Miles Garvey. The second track, “Blacker,” begins with “Black fist to the sky, Black Power,” and ends by invoking Baldwin: “I read Jimmy, and I wonder where the fire went.” (Watch the video for “Blacker” here.) Skipp Coon’s references to Baldwin hint at the power of his art as a rapper, which like Baldwin’s work itself, presents a stiff challenge to racial and economic inequality while demanding a robust commitment to the dignity and humanity of Black people. It also speaks to the enduring gravity of Baldwin’s work, something a brand new journal is taking up with energy and verve. 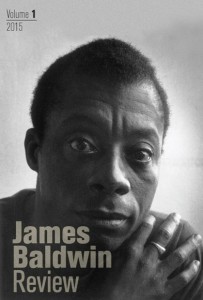 James Baldwin Review is an open-access journal published by Manchester University Press. Edited by Justin A. Joyce, Douglas Field, and Dwight A. McBride, the journal seeks to assemble

a wide array of peer‐reviewed critical and creative work on the life, writings, and legacy of James Baldwin. In addition to these cutting-edge contributions, each issue contains a review of recent Baldwin scholarship and an award-winning graduate student essay. The James Baldwin Review publishes essays that invigorate scholarship on James Baldwin; catalyze explorations of the literary, political, and cultural influence of Baldwin’s writing  and political activism; and deepen our understanding and appreciation of this complex and luminary figure. It is the aim of the James Baldwin Review to provide a vibrant and multidisciplinary forum for the international community of Baldwin scholars, students, and enthusiasts.

If the first volume of JBR is any indication, then the editors have indeed assembled a vibrant and lively collection of powerful scholarship that demonstrates the vitality of Baldwin’s ideas and the continuing resonance of his work today. From the opening editorial, “Baltimore is Still Burning: The Rising Relevance of James Baldwin,” to the illuminating “Dispatches” section which includes a piece by Baldwin friend and biographer David Leeming, to the exciting multi-media performance pieces, to the thoughtful coverage of recent conferences and scholarship on Baldwin, the JBR will remain crucial for anyone working in African American intellectual history and the many fields that the subject represents.

Congrats to the authors and editors of JBR! I think I speak for many when I say we are grateful for your work and thankful for you helping to keep James Baldwin alive. In the coming months here at the AAIHS blog look for more coverage of the JBR, as well as an interview with Douglas Field about his new book All Those Strangers: The Art and Lives of James Baldwin.