This post is part of our blog series that announces the publication of selected new books in African American History and African Diaspora Studies. In Pursuit of Knowledge: Black Women and Education Activism in Antebellum America was recently published by NYU Press.

The author of In Pursuit of Knowledge: Black Women and Education Activism in Antebellum America is Kabria Baumgartner, an assistant professor of American studies at the University of New Hampshire at Durham. Her research and teaching interests focus on early African American culture and history, with an emphasis on women and gender. She has earned numerous awards to support her research, including fellowships from the Massachusetts Historical Society, Phillips Library, the National Academy of Education, and the Spencer Foundation. Her writing has appeared in the Journal of Social History, the Journal of the Early Republic, and the New England Quarterly. Follow her on Twitter @ksbaumg. 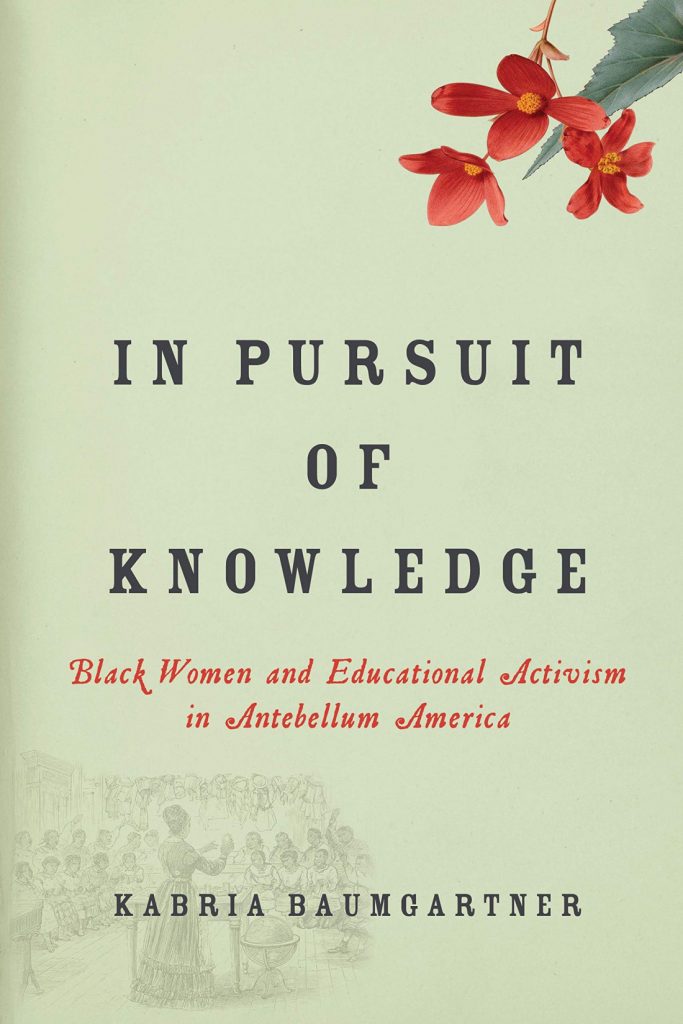 The story of school desegregation in the United States often begins in the mid-twentieth-century South. Drawing on archival sources and genealogical records, Kabria Baumgartner uncovers the story’s origins in the nineteenth-century Northeast and identifies a previously overlooked group of activists: African American girls and women.

In their quest for education, African American girls and women faced numerous obstacles — from threats and harassment to violence. For them, education was a daring undertaking that put them in harm’s way. Yet bold and brave young women such as Sarah Harris, Sarah Parker Remond, Rosetta Morrison, Susan Paul, and Sarah Mapps Douglass persisted.

In Pursuit of Knowledge argues that African American girls and women strategized, organized, wrote, and protested for equal school rights — not just for themselves, but for all. Their activism gave rise to a new vision of womanhood: the purposeful woman, who was learned, active, resilient, and forward-thinking. Moreover, these young women set in motion equal-school-rights victories at the local and state level, and laid the groundwork for further action to democratize schools in twentieth-century America. In this thought-provoking book, Baumgartner demonstrates that the confluence of race and gender has shaped the long history of school desegregation in the United States right up to the present.

“Through painstaking research and meticulous narration, Kabria Baumgartner has uncovered black women’s ‘purposeful’ educational activism in antebellum America. This book is an invaluable contribution to African American and women’s history as well as the histories of abolition and education.” — Manisha Sinha, author of The Slave’s Cause: A History of Abolition

Kabria Baumgartner: Ten years ago, I remember being surprised to learn about the first African American women’s seminary established in the North at Canterbury, Connecticut in April 1833. I had never heard of it. I then embarked upon my own research quest to learn more about the twenty or so young African American women who had enrolled there. Why did they matriculate? What or who motivated them? And how did they react to white violence that engulfed the town of Canterbury shortly after the seminary’s establishment? What happened to them after the seminary closed? Answering these questions led me to new insights about this seminary specifically, most notably that it was, at first, a desegregation fight. But I also gleaned much more about African American women’s education in the pre-Civil War era.

In Pursuit of Knowledge is a history of school desegregation in the nineteenth-century Northeast and an examination of young African American women’s quest for schooling and teaching opportunities. The young women profiled in this book, like Mary E. Miles, Rosetta Morrison, Sarah Parker Remond, and Charlotte L. Forten, were educational activists who sought to expand their minds and live their purpose. Purposefulness was an important value that shaped their womanhood. To be purposeful was to be resilient, forward-thinking, and remarkably resourceful. Hence many of these women favored an expansive definition of education, which included formal and informal learning at all ages, at all levels, and at different sites.

Much of the literature on early American education tends to depict African American girls and women as bystanders to the educational movements of the day, such as the female seminary movement and the common school movement. My book demonstrates that young African American women engaged in various forms of educational activism, including but not limited to desegregating female seminaries and high schools, building schools, and teaching children and youth.

My book links pivotal educational moments, from the Canterbury controversy to the Roberts v. City of Boston legal case, and analyzes the strategies that young women and their allies deployed as they fought for educational opportunity and access. To be clear, African American women were well aware that education could neither fix decades of racial injustice nor reverse the harmful effects of slavery in the North. Nevertheless, they recognized that the fight for education was bound up with the broader struggle for inclusion, belonging, and full citizenship.