In May 2020, Ida B. Wells-Barnett was posthumously awarded a Pulitzer Prize in Journalism for her investigations of lynchings. She had uncovered patterns that exposed the racist lies fueling the violence and protecting perpetrators from punishment. May 2020 also saw evidence of the vigilante murder of Ahmaud Arbery, calls for action regarding the March 13th execution of Breonna Taylor when police entered the wrong home, and the stabbing death of Nina Pop.

It felt like yet another American slap in the face to learn of this overwhelming brutality while celebrating an early civil rights crusader. As Nikole Hannah-Jones put it on Twitter, “A day after Ida B. Wells is awarded a posthumous Pulitzer Prize for her documentation of lynching, some 90 years after her death, we see the wrenching evidence of the ongoing legacy of the extrajudicial killing of black ‘citizens.'”

If so little has changed, if African American deaths are justifiably being called lynchings, was Wells’s work less effective than suggested by this prestigious (though posthumous) recognition???

Even if not uttered aloud, a question hovering over America’s past and present is: What’s the use, if it doesn’t convince whites to stop the violence?

As I have argued about the years 1890 to 1930, “African American communities did not just need those who would work to gain whites’ empathy; they also needed individuals who could provide tools for surviving. In other words, it is important to consider the strategies used in the fight to end mob violence, but we should also ask, How did Blacks help each other cope while lynching remained a reality? Yes, they hoped there was a ‘brighter coming day,’ but what were they planning to do in the meantime?”

As the United States seems determined to repeat the horrors of the last turn of the century, I remain grateful for Wells’s example. Here is just some of what she taught me:

1. Stand up for what you believe is true and right.

Wells exhibited extraordinary courage. I always delight in teaching her pamphlet, A Red Record, because she quite literally says that printing the truth in her Memphis newspaper The Free Speech made her an exile who will be killed if seen in the city again … and then she re-prints the offending article!

Her autobiography records the community’s concern: “I had been warned repeatedly by my own people that something would happen if I did not cease harping on the lynching of three months before.” (See Crusade for Justice, edited posthumously by her daughter Alfreda Duster.) Nevertheless, her entire career demonstrated the conviction that “The way to right wrongs is to turn the light of truth upon them” (The Light of Truth: Writings of an Anti-lynching Crusader).

Wells reminds me that being Black doesn’t mean we’re made of Teflon; the racist messages with which we are bombarded can have an effect.

Wells confided to her diary,

“Like many another person who had read of lynching in the South, I had accepted the idea meant to be conveyed—that although lynching was irregular and contrary to law and order, unreasoning anger over the terrible crime of rape led to the lynching; that perhaps the brute deserved to die anyhow and the mob was justified in taking his life.But Thomas Moss, Calvin McDowell, and Lee Stewart had been lynched…with just as much brutality as other victims of the mob; and they had committed no crime against white women.  This is what opened my eyes to what lynching really was.  An excuse to get rid of Negroes who were acquiring wealth and property and thus keep the race terrorized and ‘keep the nigger down.'”  (See Linda O. McMurry, To Keep the Waters Troubled: The Life of Ida B. Wells, 143)

To avoid believing we deserve what the United States dishes out requires telling our truths out loud, in public, and quite often. And a commitment to doing so is not primarily about white people; it’s about equipping ourselves with what we need to decline the nation’s invitation to carry guilt and shame that simply do not belong to us.

3. You’re a citizen, so it makes sense to make citizenship demands.

When a train conductor refused to let Wells ride in the ladies’ car, despite her first-class ticket, Wells sued and won damages. (See many sources, including Ida: A Sword Among Lions.)

4. It is not just via the courts that you should fight.

Wells did not wait until she could file a lawsuit to defend herself against that train conductor. According to Paula Giddings, “the conductor attempted to physically pull her out of the seat, tearing the sleeve off her dress in the process. The ideal of ‘modest deportment’ notwithstanding, Ida, determined not to be taken, hooked her feet under the seat in front of her, began scratching the conductor with her nails, and then bit his hands deeply enough to draw blood” (Ida: A Sword Among Lions, 62).

Besides having defended herself that way in 1883, Wells asserted in her 1892 pamphlet, Southern Horrors, “… a Winchester rifle should have a place of honor in every black home, and it should be used for that protection which the law refuses to give” (70).

5. White supremacist violence targets African Americans, not because we are criminals, but because we are successful in a culture that believes only straight white men should be.

Besides noting the economic motivations for lynching, the intimidation of “Negroes who were acquiring wealth and property,” Wells understood that white violence answered other types of accomplishment. She was unequivocal: “The mob spirit has grown with the increasing intelligence of the Afro-American” (Southern Horrors 62). Her insight inspires the theoretical framework of my forthcoming book. If African Americans know their accomplishments make them targets, it makes sense to examine Black literature and art through the lens of success, not protest.

6. There’s nothing fair about the struggle, so it’s healthy to take time to mourn, cry, and feel the despair that facing constant injustice inspires.

Wells confided to her diary, “I have firmly believed all along that the law was on our side and would, when we appealed to it, give us justice. I feel shorn of that belief and utterly discouraged, and just now, if it were possible, would gather my race in my arms and fly away with them.”

7. Give women of color the benefit of the doubt.

As Paula Giddings makes clear in Ida: A Sword Among Lions, Wells’s Black male contemporaries often shut her out of opportunities because many felt race leadership was men’s work anyway. However, it is clear that Wells fell out with lots of Black women, too, including Mary Church Terrell, Fannie Barrier Williams, and even the head of the Chicago Ida B. Wells Club, Agnes Moody. While Wells’s refusal to compromise on her principles inspires me, her example also encourages me to develop a practice of giving other women the benefit of the doubt.

8. Be gentle with yourself, too.

Wells felt genuinely misunderstood and hurt by her tumultuous relationships with women of color. Recognizing her anguish reminds me to be gentle with myself, giving myself grace. Society never gives me the benefit of the doubt; it doesn’t need my help in assuming the worst.

9. It’s okay to want money to grow on trees.

As historian Mia Bay explains, “In her diary, Wells kept an ongoing record of her expenditures and debts, which reveals how tenuous her claim to an elegant middle-class life was. She had grown up to be a very pretty young woman who enjoyed dressing well. But she rued the money she spent on clothes and expressed reservations about almost every purchase. […] Wells clearly regarded her clothing expenditures as a self-indulgence that she could neither afford nor avoid. ‘I have bought enough silk to finish my dress with, and buttons, thread, linings etc. Amounting to $15.80 & yet have no parasol, or other things I would like to have,’ she fretted in another diary entry. ‘My expenses are transcending my income; I must stop.'” (To Tell the Truth Freely: The Life of Ida B. Wells)

10. Ain’t nothing wrong with looking good!

Ida B. Wells definitely knew how to stunt on ’em! 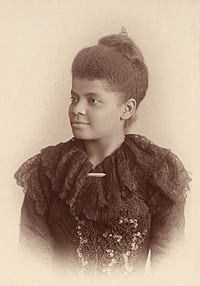 Koritha Mitchell, PhD (Koritha sounds like Aretha) is the author of the award-winning book Living with Lynching: African American Lynching Plays, Performance, and Citizenship, 1890 -1930 and editor of the Broadview Edition of Frances Harper's Iola Leroy. Her scholarly articles include "James Baldwin, Performance Theorist, Sings the Blues for Mister Charlie," which appears in American Quarterly, and "Love in Action," which draws parallels between racial violence at the last turn of the century and anti-LGBT violence today (published by Callaloo). Her book From Slave Cabins to the White House: Homemade Citizenship in African American Culture will be published in August 2020. Follow her on Twitter @ProfKori.

Comments on “Ida Taught Me”