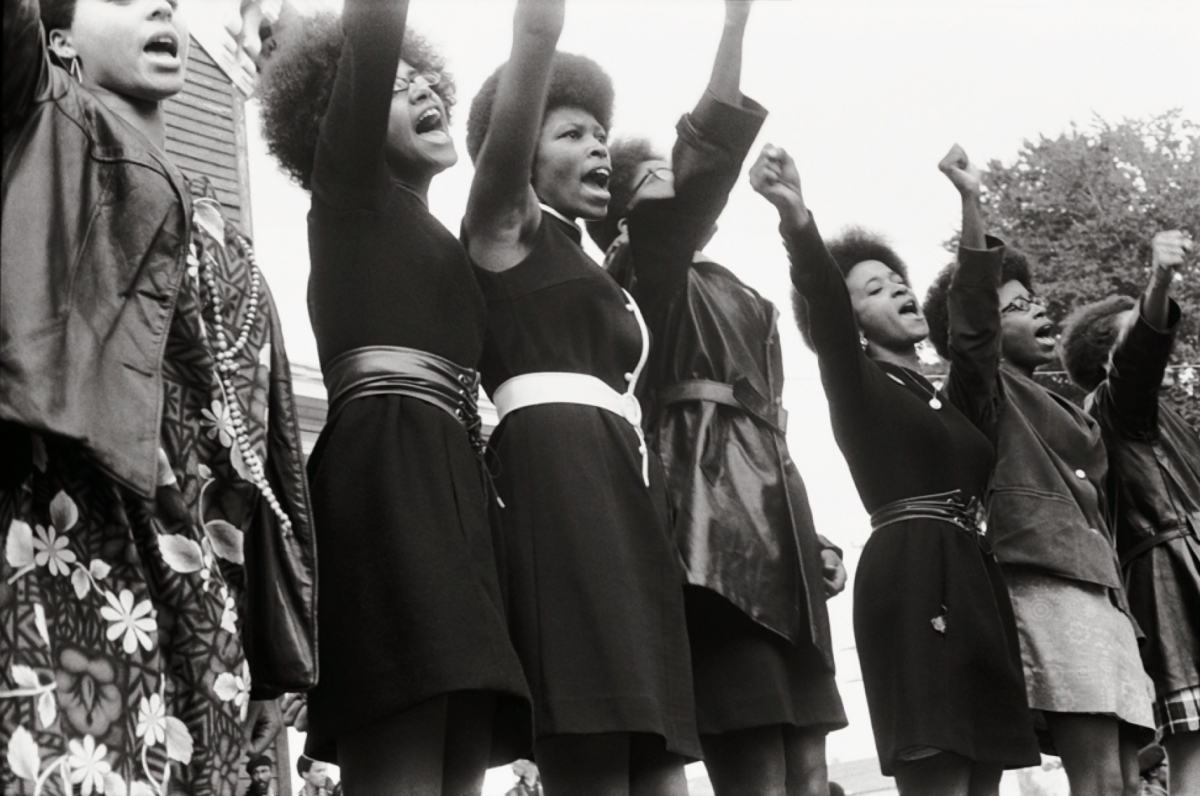 Angela LeBlanc-Ernest, Tracye A. Matthews, Mary Phillips, and Robyn C. Spencer are four Black women historians who have spent decades researching and writing about the lives of Panther women. Now working at the intersection of education, cultural work, filmmaking and activism, these women reunited in July 2016 to reflect on their paths through the academy, the state of the field, the changing political context for their work and friendship. As they laughed, commiserated and renewed ties—and as minutes turned into hours on the phone—it became clear that this was only the beginning.

The Intersectional Panther History Project (IPHP) was born at the nexus between the personal, political and professional. It is an umbrella for the ongoing collaborative effort by these historians to center Black women in the collective memory of the Black Panther Party’s history. It is grounded in the ongoing movement for Black liberation and against sexism and misogyny. The past informs the present as we build towards different #blackfutures and renew the commitment to #sayhername. In the year of the 50th anniversary of the Black Panther Party, a vision of Black liberation that centers Black women is nonnegotiable. In the excerpt below, the four discussed mentors that shielded them from discouragement, inspiration garnered from current events and the battle for visibility for their work and for themselves.

When and where do you enter the history of women in the Black Panther Party?

Tracye: I started graduate school in 1989 at the University of Michigan (U of M) and folks were just starting scholarly work on women in the Civil Rights Movement. Barbara Ransby and Belinda Robnett were working on Ella Baker and women in the Student Nonviolent Coordinating Committee . I was really influenced by their work. People were uncovering so many interesting stories about the important role of the women organizers in that era, but little had been said about what happened next. As we moved into a different phase of the Movement, the women disappeared from the story. I was like, “we couldn’t have just disappeared.” I got interested in being a historian because of my own student activism. Graduate students at U of M at the time, like Barbara Ransby and Cathy Cohen, encouraged students to study history to inform our activism. 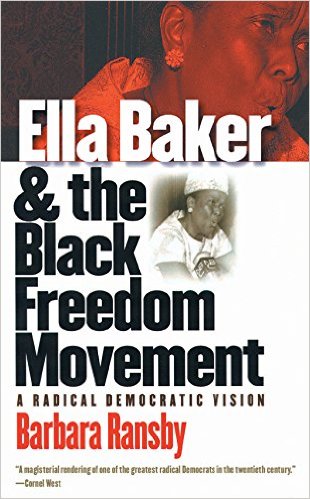 Angela: I actually had not heard of the Black Panther Party before Fall 1989. I’m from Louisiana and it’s not something I would have been taught at school. As a college sophomore at Harvard I took the Southern Civil Rights Movement. Julian Bond, a guest lecturer, used Howell Raines’ book, My Soul is Rested. It was my first introduction to oral history as a way to tell stories. He also screened “Eyes on the Prize” which included a segment with Huey Newton, Elaine Brown, and Bobby Seale. When I saw Brown I thought, “Wow! Here’s this Black woman in this organization that I never knew about.” Summer, 1990, I encountered the next visual that cemented my interest in women in the Black Panther Party: a photo of a young Black woman holding a shotgun. When I went back to school that fall, I was determined to scour the libraries and find everything that I could about the Black Panther Party, specifically women. I found a lot of primary sources: “The Black Panther” newspaper on microfilm and stories in Black magazines (Jet, Ebony, Sage). The more I dug, the more Panther women I found. 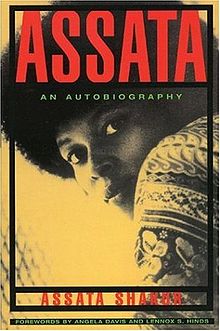 Robyn: I first learned about the Panthers as an undergraduate at SUNY-Binghamton during Fall 1989.  I took a class on women and civil rights with Elsa Barkley Brown. We read Assata and I really related to it because she was talking about places that I knew in NY. The passion of her writing and the injustice that happened to her made me interested in learning more about the time period. So I would go to the library and check out Black Power/Civil Rights autobiographies. I became really fascinated by the history of the Black Panther Party because of the way the Panthers tried to translate socialist ideas into practice. I soon came to the end of my readings. I wanted to know more, but there was nothing else. That bothered me. After Huey Newton died, my interest in the Panthers grew.

Mary: I entered the history as an undergraduate at Michigan State University (MSU). I was a Health Studies major with a specialization in Black American and Diaspora Studies. I took my first history class with Pero Dagbovie  in Fall 2000. I continued taking history courses with him until I graduated from MSU because he was such a captivating professor. When we learned about the BPP, I was so intrigued by their boldness, by the love for their people and by the ability of such a young group to do something so powerful and courageous. As an undergraduate, I became a student activist serving as president of Black Student Alliance during senior year. I modeled the BPP in my leadership and we created a 10 Point Program. It wasn’t until I started my Ph.D Program in African and African American Studies at MSU in 2004 that I really started studying the Panthers intensely. As I began to dig deeper into the literature, I started noticing the absence of women in the scholarship. I remember thinking, “Where are the women?” “What are their stories?” What was their impact?”

What reception did you receive when you first proposed major research on this topic?

Tracye: I felt pressure to pick a different historical time period to study. At the time, it didn’t seem legitimate in some circles for historians to study the sixties because it was too soon. It was not really history yet. In fact, no one on my committee actually focused on that time period. It made me have to tease out methodologies and analytical frames that I could use to study a later time period. For example, Elsa Barkley Brown significantly influenced my analysis of gender politics.

Angela: During my undergraduate years, I received nothing but support for the topic. I didn’t go through the History department; I was in African American Studies. From Gerald Gill (Tufts University) and also Catherine Clinton, who was at Harvard at the time, I got a lot of encouragement to pursue that line of research. When I moved on to graduate school in 1992, I was working with Clayborne Carson and Estelle Freedman. Both of them together were really encouraging. I was in U.S. History at that point, in the History Department, and there were a couple of professors who literally expressed their beliefs that what I was interested in was current events. However, I always had enough scholars to encourage me. It was a balance for me.

Robyn: I got support from some folks and then I got discouraging questions: What kind of sources was I going to use outside of oral history? Was this topic going to hamper my ability to get a job? Was this topic going to marginalize me? Would this topic have a negative impact on how I would be perceived in the profession? These questions were wrapped in the package of kind advice. I had a lot of support from people like Eric Foner, Manning Marable and Daryl Scott. I was also supported by activists in the Black Panther Collective, which was a group of young people I worked with who were learning about the history of the Panthers in New York.

Mary: When I started my PhD program, I received a lot of support to research this topic from my dissertation committee. I was highly encouraged to do oral history. I remember being asked during my proposal defense, “how are you going to get access to these women to interview them? Will you be able to do that?” Initially my saviour was the Panther newspaper and then I started networking at conferences and utilizing my contacts to set up some interviews.

In 2016, the scholarship is deeper and richer than when these women began their journeys as scholars, but some of the troubling gaps, discouraging resistance, and harsh political realities on the ground that motivated them decades ago, still remain. Panther scholar Curtis Austin has recounted one incident of harassment he faced while traveling with his books. The interdisciplinary departments that supported these scholars are facing funding crises in the universities’ neoliberal turn, the grassroots movements that sustained them are battling state violence and once again Black feminists, including insurgent scholars, are issuing the familiar call to #sayhername. In this context, they now renew their commitment to #changingthenarrative . An extended version of this roundtable centered around feminism will be submitted to an academic journal. IPHP founders will reunite in person in December 4-5, 2016 for a two-day symposium on the Panthers’ legacy sponsored by the Center for the Study of Race, Politics and Culture at the University of Chicago.

Angela D. LeBlanc-Ernest, M.A., is a Houston, Texas-based historian, independent scholar, filmmaker and former director of the Black Panther Party Research Project at Stanford University. Her research, publications and film projects have focused on BPP women, gender and community programs. Current projects include producing and directing a documentary on the OCS and writing a manuscript on BPP women and the community programs.

Tracye A. Matthews is a historian, curator, and documentary filmmaker. She is currently the associate  director of the Center for the Study of Race, Politics and Culture at the University of Chicago. Her work has been published in numerous anthologies and journals and she is currently writing a book on the gender and sexual politics of the Black Panther  Party.

Mary Phillips is an Assistant Professor in the Africana Studies Department at Lehman College, City University of New York. Her research looks at women and gender in the Black Panther Party. She is currently completing a political history on Ericka Huggins.

Robyn C. Spencer  is Associate professor of History at Lehman College, CUNY and currently a fellow at the Whitney Humanities Center at Yale. She writes on the history of the Black Power movement and is the author of the forthcoming book The Revolution has Come: Black Power, Gender and the Black Panther Party in Oakland.