*Editor’s Note: This week we are publishing some of our favorite BP articles. We continue with this essay by historian Yuichiro Onishi as part of our forum on Gerald Horne’s Radical History.

The historian Gerald Horne is a black internationalist. This stance pushes the reader into the whirlwind of world history. In part, the boldness with which Horne charts the movement of world history has to do with his prose. He has a way of lifting up from archives the experiences of New World Africans and their descendants and allies in the struggle. They appear in his prose as historical agents that comprehend the existing political and economic order governed by empire, race, and racism.

Even when their voices are absent in the records, Horne knows how to dramatize the nature of their struggle. All the humiliations, insults, and violences they experienced— evinced in the vulgar racist language of the annals and countless reports on atrocities, and most important, accounts of what the oppressed did with what was done to them by white supremacy—in Horne’s hands, would link up with world-historic developments. He pieces together a myriad of vignettes drawn from the local experience of race and racism to create a mirror that allows the reader to grasp imperial convulsion and anarchy.

All in all, Black self-determination is the central analytic in Horne’s corpus. The struggles for Black liberation and all the solidarity projects against racism and imperialism, in his accounts, are tethered to wars, revolutions, inter-imperial rivalries, and crises of a world order built upon race and capitalism. These volatile circumstances enable centers of global power, from Washington to London to Moscow to Tokyo, to shift, clash, and realign. Horne refers to this contestation and jousting for global supremacy as the “race for the planet,” the title of the book he published in the aftermath of the collapse of the Cold War. 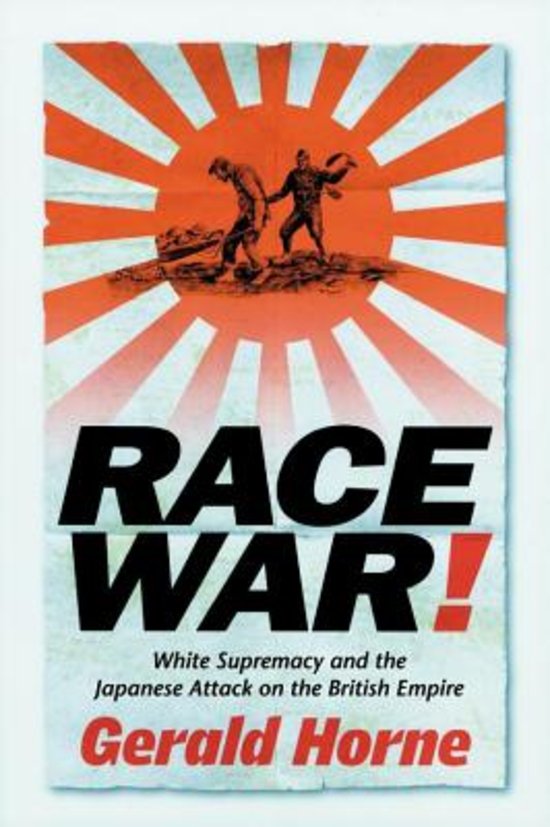 The vortex of the “race for the planet” brought the constellations of the Darker World onto the center of the world’s stage. The hallmark of Horne’s craft as a historian is that he can connect these vectors located within and surrounding the Darker World in striking ways. Such books as Race War! (2004), The White Pacific (2007), and The End of Empires (2008) are all exemplars of Horne’s work as a Black internationalist. His thesis is that these connections and the very messiness of politics emanating from the nexus between African Americans and Japan, or African Americans and India, or Hawai‘i and Japan matter. They are raw materials out of which history moves to unleash “blows against the empire,” the title of yet another short book, published at the end of the George W. Bush presidency on the state of U.S. imperialism

While topically these three books are different, one thing is recurring: Japan enters into Horne’s analysis and interpretations. The argument presented in Race War! is that the persistence and brutality of U.S. and British racism enabled Japan to carry out imperial expansion and colonization across Asia during the Pacific War. Japan, the aggressive colonizer and formidable empire that challenged Anglo-American power, capitalized on the global workings of race to fashion itself as the champion of darker nations and people, although it was anything but that. Such was the corrupting, volatile, and contradictory character of race in the context of empire-building. What I call “Gerald Horne’s Japan” is a method that helps bring together race and empire into a dialectical analysis.

Horne, for instance, tracks African American leaders operating out of the domain of Black nationalism (e.g. the Nation of Islam and other offshoots). Japan’s appeal for race war and global solidarity was a boon to Black nationalists that were working to develop their own movements and organizations. A pro-Japan enthusiasm certainly raised alarm among American officials. A similar pro-Japan tendency cropped up among Australian Aborigines and the Maoris of New Zealand, as it also did in India, rattling the officials of the British Empire. If not a pro-Japan position, then, left-leaning Black leaders exploited West’s Achilles’ heel, state-sanctioned racism in the United States and colonialism in Africa, the Caribbean, and Asia. They highlighted, at once, hypocrisy in Anglo-American foreign policy and imperatives of desegregation, decolonization, and democratization on home fronts and colonies, all of which Japan professed as it advanced the self-aggrandizing and rapacious policy of pan-Asianism. Amid this crisis over race and world order, the domestic racial status quo cracked and racial reform ensued in the United States and the United Kingdom.

Horne’s analytical stance on Japan is firm: an emphasis on Japan’s role in the globalization of opposition to white supremacy during the first half of the twentieth century, he argues, helps demonstrate the very confluence of world and domestic affairs, which he considers vital to the struggle against racism and imperialism, then and now. In The End of Empires, he defines Japan’s animating presence in terms of “a V-shaped formation of flying geese, with Japanese leading the way.” Those occupying “each shoulder” were South Asians and African Americans. Such solidarities among people of color constituted an affront to Anglo-American power and unsettled the international politics of race throughout the first half of the twentieth century.

Also central to this globalizing process of resistance to white supremacy were “south-south” collaborations of sorts. The case in point was a coming unity of people of color occurring during the Great War amidst the Mexican Revolution. Known as the “Plan of San Diego,” this scheme set out “to liquidate all European males in the southwest, retaking land seized from Mexico decades earlier, and establishing independent Negro and Native American republics on the emptied land,” and, as he writes, it “apparently involved not only Mexicans and Mexican-Americans but also the Japanese.”

Similarly, prior to the overthrow of the Hawaiian Kingdom in 1893, the emerging diplomatic ties between Hawai‘i and Japan and the development of Japanese immigration to Hawai‘i caused the grounds of race and world politics to shift. During this period, Hawai‘i sought to strengthen its alliance with Japan and Britain to shield itself against U.S. encroachment. In The White Pacific, Horne discusses how Japan’s presence became a touchstone for the ascent of white supremacy in the Pacific, the vast area to which the Confederate State of America nationals flocked to after the Civil War to renew their determination to continue Black slavery, or “blackbirding,” in Fiji and Australia through the exploitation of Melanesians and Polynesians.

Given this historical context, Horne’s book on postwar labor radicalism in Hawai‘i, Fighting in Paradise (2011), is significant. It is a story of the multiracial working class on the plantations and docks in Hawai‘i—consisting of Native Hawaiians and people of Japanese, Okinawan, Chinese, and Filipino backgrounds—coming together to fight racism and economic exploitation, and along the way, buoying the movement for statehood to make social democracy central within state politics. But, it can also be read as a critical reminder that fighting white supremacy and struggles of labor are never far apart and are in fact always bound up with world-historic dynamics in contingent and antagonistic ways.

Gerald Horne’s Japan is consistent with W. E. B. Du Bois’s Japan. In the 1930s, linking race and empire to make history, Du Bois rejected the cause of interracial labor radicalism and its widespread appeal in New Deal America. He also did not trust in the vision of the Communist Party-led Popular Front. He instead encouraged the development of all-Black cooperatives and at the same time called for an economic alliance with powerful industrial powers like Japan. Responding to the deep crisis of racial capitalism, it was a strategic move on his part to insist on Black self-determination via economic cooperation, although his peers saw his politics as, at best, out of touch, if not wrong-headed. Contained in Horne’s Black liberation is the same logic. Explaining his stance as a Black internationalist in The Counter-Revolution of 1776, he, too, reworked the call for “Black and white, unite and fight” to issue the following dictum, “Africans here and abroad unite and fight in league with a powerful foreign ally.” Herein lies the kernel of Horne’s Japan.

Yuichiro Onishi teaches in the Department of African American & African Studies and the Program in Asian American Studies at the University of Minnesota, Twin Cities. He is an African Americanist trained as a historian of modern America. He is the author of Transpacific Antiracism: Twentieth-Century Afro-Asian Solidarity in Black America, Japan, and Okinawa (NYU, 2013).