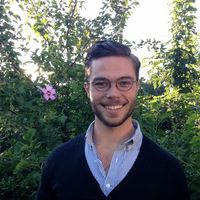 This is a guest post by Jonathan Lande, winner of the 2016 Du Bois-Wells Graduate Student Paper Prize. This annual prize recognizes the most outstanding paper presented by a graduate student at the annual AAIHS conference. Jonathan won the Du Bois-Wells paper prize for his conference paper entitled, “The Black Badge of Courage: The Politics of Freedom and the Memory of Black Soldiers in the Civil War.”

Jonathan is a Ph.D. candidate in History at Brown University. He earned his B.A. (summa cum laude) from DePaul University in 2010 and his M.A. (first class honors) in Modern History from Queen’s University Belfast in 2012. His M.A. thesis traced the changing relationship between black abolitionists and July Fourth during the nineteenth century and received Highest Distinction. His Ph.D. dissertation,  “Disciplining Freedom: Union Army Slave Rebels and Emancipation in the Civil War Courts-Martial,” offers a new interpretation of the history of black Union soldiers. His article, “Trials of Freedom: African American Deserters during the U.S. Civil War,” delves into a part of this story, examining the trials of black deserters and how the courts-martial influenced freedom using the logic of contracts. It was recently published in the 2016 Spring issue of the Journal of Social History. You can follow Jonathan on Twitter @Jonathan_Lande.

Nearly 200,000 free and formerly enslaved black men served in the Union army during the Civil War. For many, service offered liberation and citizenship. As Frederick Douglass put it, writing in the Douglass’ Monthly in April 1863, waging war on Confederates was the chance “to fight for nationality and for a place with all other classes of our fellow citizens.” Like over 130,000 freedmen, John Mitchell enlisted, joining in the 53rd U.S. Colored Infantry in early 1863. He bravely pledged his life to the crusade to end slavery and to preserve the Union, but then on November 22, 1863, he deserted. Why, if the stakes were so high as Douglass remarked, did Mitchell abandon his post, and how did the army respond?

The politics of desertion recently reemerged into the news cycle. In 2009, Bowe Bergdahl, a white Private First Class in the U.S. Army, left his post in Afghanistan. He was captured by the Taliban and held for five years. After returning home, Bergdahl’s desertion was drawn into the national spotlight. In the current season of NPR’s podcast series, Serial, host Sara Koenig delves into the meaning of Bergdahl’s desertion, asking whether he deserted out of a higher cause to his country and comrades or merely out of self-interest. The same question might be asked about the desertion of John Mitchell in 1863, though in that instance, the matter is even more fraught because of the issues of slavery and race.

Throughout U.S. history, African Americans wrestled with American patriotism, vexed by the purpose of serving a government that supported slavery and was built upon white supremacy. In the twentieth century alone, African American intellectuals lent their voices to the debate. Writing “Why Negroes Should Oppose the War” in 1939, C. L. R. James advised African Americans not to join World War II. He argued that black men would be mere “cannon fodder.” In 1943, Cora Bell Moten spoke movingly of her sacrifice in her poem, “Negro Mother to Her Soldier Son.”1 On October 16, 1965, the Black Panther Party for Self Defense proclaimed, “WE WANT FREEDOM,” in their 10-Point Program and went on to demand that black men be exempt from military service. Huey Newton and Bobby Seale asked: “How can you have a black man going over there to fight a yellow man for the white man who stole his land from the red man? That makes a nice rhyme but no political sense whatsoever.” Less than a year later, compelled by “the mandates of conscience and the reading of history,” Martin Luther King, Jr., decided to break his silence. He explained that despite his deeply held patriotism he could not support the Vietnam War.

For centuries, African Americans struggled with the implications of service. In the U.S. Civil War, as the nation fought for its survival and as the substance of black freedom hung in the balance, African Americans considered their role in war and place in the military. This is vividly captured in the story of Private John Mitchell, which shows one man’s motivation to desert and the Union Army’s response to his challenge. As with the conflict over African American military service in the twentieth century, and as with the divisions than can attend a desertion like Bergdahl’s in the current political climate, Mitchell’s story reflected the sentiments and actions of more than just one person.

In 1861, Union recruiters turned down thousands of free black northerners who offered their service. After considerable debate, Lincoln finally came to the decision to muster black soldiers in late 1862. However, even after black soldiers proved their heroism in South Carolina, where the 54th Massachusetts Volunteers famously charged up the secure Confederate defenses at Fort Wagner, some soldiers suffered disgraces at the hands of white Union officers. Private John Mitchell was one such black soldier.

Private John Mitchell enlisted in the 53rd U.S. Colored Infantry. He joined thousands of former slaves who fought valiantly in the U.S. Civil War for the Union and against slavery, thereby earning their freedom even as they combated anti-black racism and limitations on their freedom within the Union ranks. Aside from his service, not much is known of Mitchell—except that he questioned serving in the Union army.

Mitchell grew disenchanted with the Union army. He despised being “kicked and cuffed” by the white officers. He asked for a transfer. Not being picky, he admitted, “I was willing to go into any other company in the Regiment.”2 Mitchell was ignored. He continued suffering discipline reminiscent of bondage. Eventually, like bold maroons throughout the Caribbean and daring runaways of the U.S. South before him, Mitchell ran on November 22, 1863.

Although Mitchell deserted his post at Milliken’s Bend, Louisiana, it is important to appreciate that he was not turning his back on the freedom promised to him in exchange for military service. Instead, he chose to establish his freedom in his own way. When he left his abusive army unit, he found work on board a Mississippi River steamer called the Shenango.

Officers in the Union army saw desertion as a major problem and took action to track down deserters and prevent desertion. The search for Mitchell continued for five months. Finally, on April 15, 1864, Captain William Hubbard trapped Mitchell. Hubbard took Mitchell into custody and transported him to Vicksburg, Mississippi. There, Mitchell awaited trial by the court-martial.

On June 15, 1864, the army tried Mitchell for desertion. No black men served on the courts-martial because only commissioned officers, all of whom were white during the Civil War, could sit on a court-martial. Mitchell pleaded his case to the white officers. He explained that he had requested a transfer to escape maltreatment. The tribunal dismissed Mitchell’s appeal to a justice higher than army regulations and convicted him.

According to army regulations, the officers could sentence Mitchell to death as a deserter, but they elected to reprimand rather than execute him. The tribunal sentenced him to hard labor for four months and ordered him shackled to a 12-pound ball for the duration. They required Mitchell yield all the pay he was due and that he would incur in hard labor. Even if it was a sentence that saved Mitchell from death, the sentence that Mitchell received from the court-martial underscored what sociologist Orlando Patterson calls the social death of slavery.3 For escaping abuse, Mitchell would labor unpaid, in chains, as a convicted criminal.

Shortly after the trial, Brigadier General John Hawkins reviewed Mitchell’s case. Hawkins saw no reason to overrule the court-martial; indeed, he wondered if the sentence could have been even harsher. Like white officers throughout the Union army, Hawkins failed to appreciate or respect Mitchell’s desire to live free of abuse. Mitchell’s decision to work aboard a Mississippi River steamer was as politically motivated as the choice to enlist in the army. Mitchell believed freedom meant living shielded from physical violence and working in fair conditions for reasonable wages. Nonetheless, neither Hawkins nor the white soldiers that tried black deserters throughout the war understood freedmen’s vision of freedom. Rather, they imposed and enforced their own idea—that freedom meant liberation from the slaveholder only, and not freedom from all coercion and the freedom to strive for equal citizenship.

Hawkins, the officer who reviewed the court-martial’s verdict and sentence, agreed with the officers who had ruled that Mitchell had violated his contract with the army, but he went even further. He decided to make an example out of Mitchell. Reflecting on the case, Hawkins said Mitchell showed his “desertion was premeditated,” and therefore Mitchel did not deserve leniency. Hawkins declared, “Desertions have been too common… It is time they learn the just punishment due a deserter.”4 Hawkins altered the final sentence: instead of receiving four years of hard labor, Mitchell was to face a firing squad.

Similar to Bergdahl’s desertion, Mitchell’s decision to confront rather than abide by the military code was grafted onto larger political questions. The context of slavery and race makes Mitchell’s desertion all the more vexing—as does the conclusion. In the end, the army that promised liberation deserted Private John Mitchell. On September 15, 1864, at three in the afternoon, he was killed by firing squad.

Comments on “Freedom, Race, and Desertion in America’s Civil War”