This post is part of a blog series I am editing, which announces the release of selected new works in African American and African Diaspora History and Studies. First Strike: Educational Enclosures in Black Los Angeles was recently published by the University of Minnesota Press. 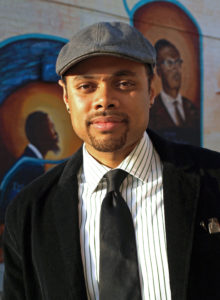 The author of First Strike is Damien M. Sojoyner. Professor Sojoyner is an Assistant Professor in the Department of Anthropology at the University of California, Irvine. He researches the relationship between the public education system, prisons, and the construction of Black masculinity in Southern California. In addition to his work appearing in many popular media forms, he has written articles in scholarly journals such as Transforming Anthropology, Race, Education, and Ethnicity, and the Berkeley Review of Education. Professor Sojoyner earned a Bachelor of Arts in African and African American Studies and a Masters of Arts in Sociology from Stanford University. He holds a PhD in Anthropology with a concentration on the African Diaspora from the University of Texas at Austin. Follow Professor Sojoyner is @BrotherSojo. 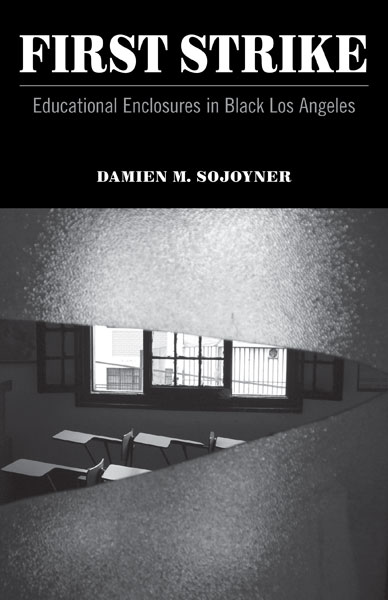 California is a state of immense contradictions. Home to colossal wealth and long portrayed as a bastion of opportunity, it also has one of the largest prison populations in the United States and consistently ranks on the bottom of education indexes. Taking a unique, multifaceted insider’s perspective, First Strike delves into the root causes of its ever-expansive prison system and disastrous educational policy.

Recentering analysis of Black masculinity beyond public rhetoric, First Strike critiques the trope of the “school-to-prison pipeline” and instead explores the realm of public school as a form of “enclosure” that has influenced the schooling (and denial of schooling) and imprisonment of Black people in California. Through a fascinating ethnography of a public school in Los Angeles County, and a “day in the life tour” of the effect of prisons on the education of Black youth, Damien M. Sojoyner looks at the contestation over education in the Black community from Reconstruction to the civil rights and Black liberation movements of the past three decades.

Policy makers, school districts, and local governments have long known that there is a relationship between high incarceration rates and school failure. First Strike is the first book that demonstrates why that connection exists and shows how school districts, cities and states have been complicit and can reverse a disturbing and needless trend. Rather than rely upon state-sponsored ideological or policy-driven models that do nothing more than to maintain structures of hierarchical domination, it allows us to resituate our framework of understanding and begin looking for solutions in spaces that are readily available and are immersed in radically democratic social visions of the future.

“Sojoyner provides a masterful narrative of Black Los Angeles against the backdrop of mass incarceration and the criminalization of Black children. Scholars and educators should heed Sojoyner’s call to challenge the ‘school-to-prison’ discourse to the more historically grounded ‘enclosures.’” —Maisha T. Winn, Chancellor’s Leadership Professor, University of California, Davis

Damien M. Sojoyner: The creation of First Strike is as much personal as it is an academic pursuit. I grew up in Carson, CA, a relatively small city snuggled in between Long Beach and Compton. As a child of the 1980’s and 90’s who attended public schools in Long Beach, there were two constants that are firmly implanted in my memory: police presence was ubiquitous and the racialized implications of education were quite apparent from an early age.  These two constants greatly informed how I thought about the world throughout my childhood and were central to the development of the research questions that are the basis of First Strike.

The slow drone of a police helicopter in the distance that quickly picked up intensity as it flew overhead was a daily reality for most Black people living in Los Angeles County.  The proverbial boots on the ground reinforced the haunting of the sky by police surveillance. Police stations such as the infamous 77th street station in South Central Los Angeles became literal fortresses that stood and continue to stand out in neighborhoods. Los Angeles County Sherriff and Los Angeles Police Department substations became institutionalized on school campuses. SWAT team raids of homes were common stories ran on the cover of the Los Angeles Times and local television news stations.  The massive build up of prisons in the state of California of course situated the backdrop of these forms of policing.

At the exact time this was happening, the function and structure of education was quickly changing.  Much of my educative experience was marked by standardized testing and increased levels of “security.”  Testing became the mechanism that calibrated your future placement in society–from getting into particular magnet programs in elementary and middle school to going to the “right” high school to determining your post high school plans. In a not too dissimilar manner, school security also determined one’s future success. School lockdowns administered by police, physical barriers to entry and strict zero tolerance discipline policies that carried the weight of jail time had serious consequences upon many of us growing up during this time period.

Two primary questions that developed as a result of these experiences were governed by the basic queries of why and how. Why was it that for the vast majority of Black people in Los Angeles County, and Black youth in particular, strict, and very often draconian forms of social control dominated life? Second, but no less important, how did these mechanisms develop?  What were the historical and ideological factors that gave rise to the modern condition?  As I began the research for the book, the most readily available mode of analysis was framed by the logic of the “school to prison pipeline.” However, as I began my ethnographic and subsequent archival research I found such an analytic and theoretical device lacking depth and substance. It did not account for the evisceration of Black culture from school curriculum, the manner in which technologies of control in schools informed the development of prisons, how the current attack upon Black education was intimately connected to a violent contestation over education and perhaps most important, it situated Black youth as passive subjects being funneled and controlled by the state instead of framed by what I knew to be true: attempted forms of social control were very often in response to the knowledge and actions embedded in Black youth. The cumulative result of these questions and research is First Strike: Educational Enclosures in Black Los Angeles. A book with a primary intent of reframing our conversation pertaining to schools and prisons while also positioning the centrality of Blackness in the conversation of solutions and analysis.

Click here to listen to Damien’s recent interview with the New Books Network.