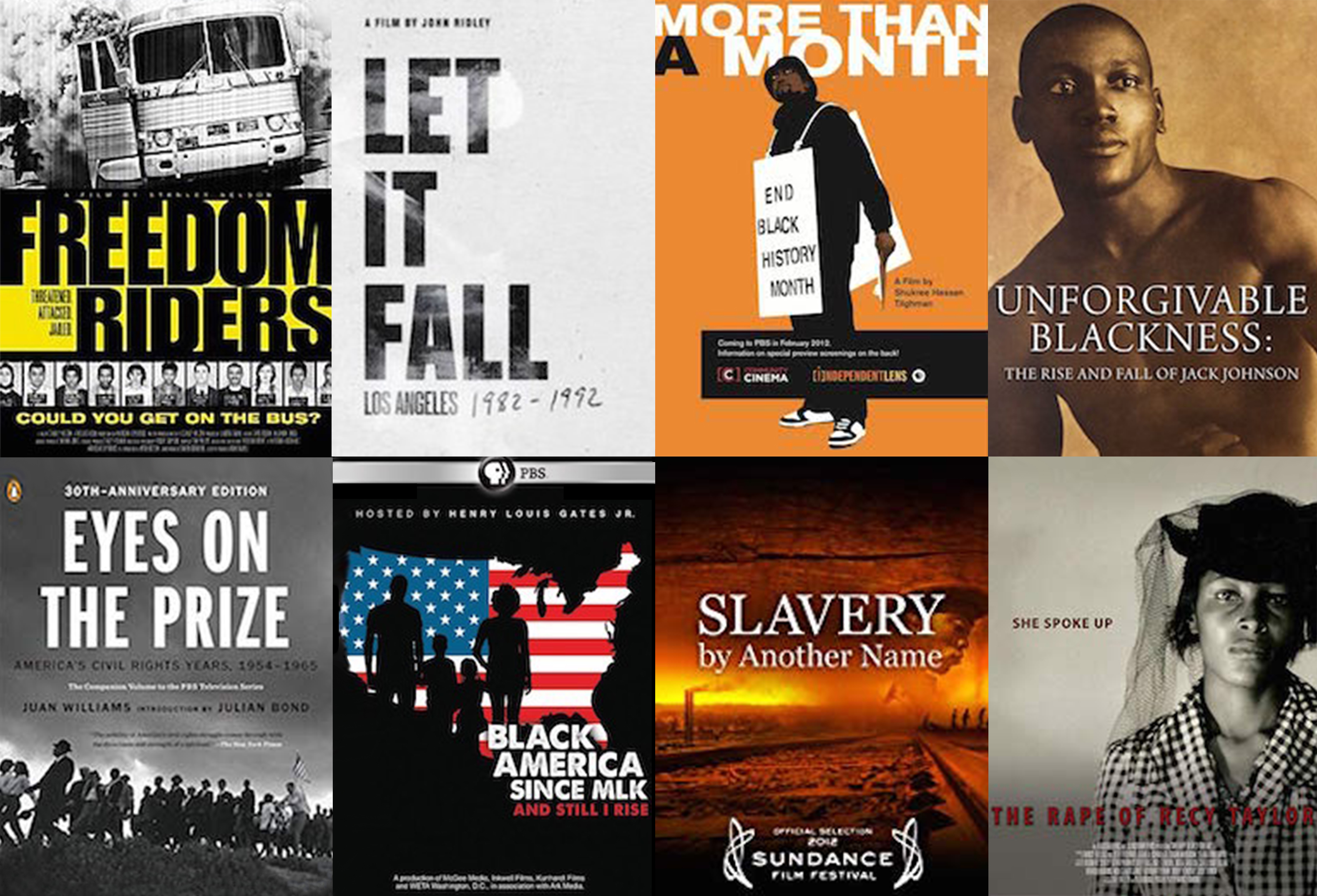 Let’s face it: some students do almost no reading in our classes. But even if they seem to rarely crack open a book, we all want our students to learn something from our classes–to remember at least a few things after the semester is over. Films are one of the tried and true methods for engaging students who are unfortunately reading averse. And even for our hardest working students, an effective film can bring alive historical material, transforming historical actors who seem distant and foreign on the written page into people who are relatable. In particular, documentaries that adeptly combine primary source material and narrative appeal can impress students when seemingly nothing else will. There’s no shortage of documentaries for teaching African American history, but here is a list of ten recommended documentaries that have worked well in my classes. These documentaries focus on African American history since 1865. They are short (2 hours or less), accessible, emotionally powerful for viewers, and not overly specialized in their focus. I’ve given preference to films that students can stream, either through Netflix, YouTube, or the educational film database Kanopy, which also includes film transcripts.

Slavery By Another Name (90m, Kanopy)

Most of our students are familiar with the legal segregation of public facilities and schools that whites subjected Blacks to from the years following Reconstruction to the 1960s. But many students are only vaguely familiar with Southern states’ tortuous practices of convict leasing and debt peonage during this period. This documentary, based on Douglas Blackmons’ book by the same title, powerfully recreates the stories of Black men and women who were snatched back into servitude for any number of alleged, and often unproven, crimes.

Ken Burns’s entire documentary on the life of Jack Johnson is outstanding, but the first part, which focuses on Johnson’s long road to a championship in which he decisively defeated Jim Jeffries, is particularly stirring. Students respond favorably to the story of Johnson’s independent defiance of white supremacy in the worst years of Jim Crow, and they are often surprised by the depth of backlash and violence that followed his world championship.

This short segment from 60 Minutes tells the story of one of the Jim Crow era’s most brutal acts of mass racial violence, an incident that is unknown to many Americans almost a century later. The segment raises powerful questions of how local and state governments can adequately compensate Black victims of Jim Crow’s cruelties.

Shukree Hassan Tilghman’s humorous and original documentary revolves around a provocative question: should there be a Black History Month? Tilghman’s film not only moves viewers to probe the rationale and consequences of consigning celebration of African American history to the year’s shortest month, but it pushes them to contemplate how our society can and should make a real commitment to Black history.

This searing documentary tells the story of Recy Taylor, a Black woman who was brutally raped by a gang of whites in Abbeville, Alabama in 1944 and defied Jim Crow custom by demanding local law enforcement pursue her case. Taylor’s brave struggle and the support she received from the NAACP and a young Rosa Parks pushes students to questions some of their most basic assumptions about the civil rights movement’s leaders and tactics.

The Eyes on the Prize series is unquestionably one of the greatest documentaries on any aspect of American history. The pioneering examination of the civil rights movement was first broadcast into American homes in 1987, long before the Black freedom struggle had inspired hundreds of documentaries. Within the context of a class devoted to the civil rights movement, an instructor might choose to have students view the entire fourteen-hour series. In the African American survey, however, there may be only time for a single episode, in which case the very first episode of Eyes on the Prize makes an excellent introduction to the movement as it emerged in the national consciousness in the middle of the 1950s.

Stanley Nelson’s account of the Congress of Racial Equality (CORE) and the Student Nonviolent Coordinating Committee (SNCC)’s Freedom Ride campaigns of 1961 is absolutely stunning. With a masterful blend of original footage and contemporary oral history, Freedom Riders shows the staggering bravery of intercity bus activists, as well as the sadistic resistance they faced from white segregationists.

Black America Since MLK: And Still I Rise, “Out of the Shadows” (56m, Kanopy)

The last decade has produced numerous excellent documentaries on Black Power, including Stanley Nelson’s The Black Panthers: Vanguard of the Revolution and Göran Olsson’s Black Power Mixtape. Both are worth showing in classes, but for the African American survey course, I would recommend “Out of the Shadows,” the first episode of Henry Louis Gates’s Black America Since MLK: And Still I Rise. In just under an hour, the episode provides a panoramic view of Black Power and skillfully explains how the movement emerged alongside the civil rights movement while ultimately moving away from it—vital context for undergraduates who may have only a cursory understanding of Black Power.

Racial inequality in the criminal justice system is another topic that has inspired a number of important documentaries in recent years, including Ava DuVernay’s 13th, Sabaah Folayan’s Whose Streets, and Matthew Pillischer’s Broken on All Sides. All are worth watching, but John Ridley’s Let it Fall surpasses them in its power and poignancy with its close examination of LAPD officers’ beating of Rodney King, the failed prosecution of those officers, and the uprising and riots that followed in Los Angeles in April 1992. Let It Fall also stands out amid a crowded field of films on the LA Riots by offering a longer historical view of the LAPD’s hostility towards Black Angelenos.

Black America since MLK: And Still I Rise, “Touch the Sky” (55m, Kanopy)

The history of race in the last fifteen years in the United States—including the election of Barack Obama, the failed response to Hurricane Katrina, the continued need for a Movement for Black Lives, and the election of Donald Trump—defy easy historical analysis. Young students may take these things for granted, especially those who grew up while Obama was in office. The last part of Gates’s Black America since MLK:And Still I Rise skillfully dissects the era’s contradictions while shedding light on the surprises, achievements, and setbacks of the last decade-and-a-half, and in so doing, it pierces any sense of inevitability students may have about recent African American history.

Comments on “Documentaries for Teaching African American History since 1865”