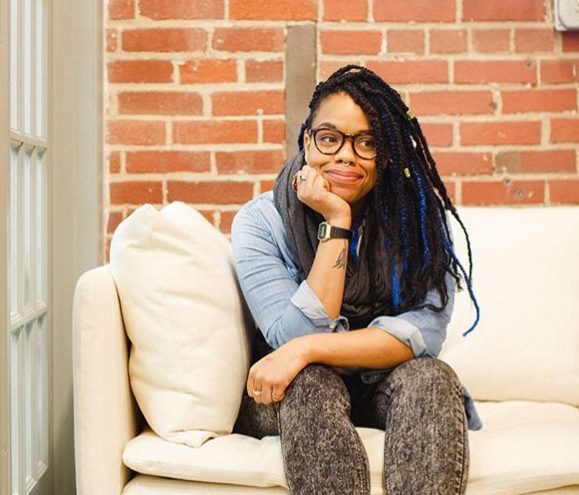 In today’s piece, Ajamu Amiri Dillahunt interviews Tamika Blu, a community organizer, parent, artist, and data scientist who is dedicated to advancing Black Queer and marginalized communities by fighting to end racial capitalism and developing Black-led movements. Originally from New York City, they reside in Charlotte, NC where they work as the co-director of North Carolina’s Black Leadership and Organizing Collective and as a community researcher for the Our Data Bodies Research Project. Tamika has an overall passion for supporting local initiatives, integrating art and social justice, developing local leadership, and securing resources to help unify and advance the efforts of marginalized communities across the state.

Tamkia Blu: I’m originally from the east side of Harlem, NYC. Growing up, I can always remember police being in my community as well as Black mommas coming together to figure out how to collectively survive. I never understood the why behind what was going on. Before I got involved in social justice work, I was interested in becoming a criminal profiler for the FBI, thinking, if I could help catch serial killers — who are predominantly white men — I might be doing a service to my community. It wasn’t until I was in high school that I started to learn about economic and educational injustices, white supremacy, and the effects of capitalism on Black communities. Throughout high school I was a member of the Harlem Children’s Zone’s Learn to Earn Program, so I understood on some level systematic oppression but couldn’t name it.

During the end of my junior year in high school, in 2006, my guidance counselor suggested that I attend this women’s empowerment event hosted at the Door, an LGBTQ youth center in Manhattan. I went and met my best friend for now ten years, Lee Page, who introduced me to Reina Gossett. Gossett introduced me to Critical Resistance; abolition; the dope organizers of the Regeneración Child Care Collective; advocating for Trans, Youth, and LGBTQ rights; and supported my development as a community organizer. That summer I worked with Critical Resistance NYC on the Freedom Summer Project and worked in the Bronx hosting community workshops and trying to stop the development of a youth jail. I continued working with Reina and her friends throughout the year to help organize a bus to the first United States Social Forum. The same day I graduated from high school, I boarded a bus to Atlanta to attend. It was the first time I understood the full scope of what was possible for our communities and the world. My mind was blown, and that was the moment I became dedicated to fighting for liberation. Shortly after, I joined the planning team of CR10!, Critical Resistance’s 10-year anniversary summit. That summer, I met Angela Davis (who I had no idea about) and got to inform hundreds of people on the behalf of youth.

Dillahunt: Describe your transition from New York to North Carolina?

Blu: I spent a large amount of my young adulthood in Buffalo, NY where I received a BSW in Social Work and an MS in Creative Studies and Community Development. I dedicated a lot of my time building programs and workshops with the Community Action Organization for youth-at-risk. Upon finishing my masters, I decided to apply for Teach for America, which was a suggestion from one of my sorority sisters, and I actually got it. I came to NC in 2013 to teach and build youth leadership within the education system and was shocked by TFA, its politics, and its, in my opinion, shallow commitment to serve youth-at-risk and their communities. I took a year off from the program so I could build genuine community. I committed to the city of Charlotte and wound up not going back to TFA. Adjusting to Charlotte was hard — here, you have to seek out and find your folks, whereas in NYC you just stumble upon them.

The verdict of the Mike Brown case helped to thrust me back into community-based organizing, movement building, and youth work, with a focus on prison abolition. In 2014, I was a part of the founding council of the Tribe CLT and shortly after, became a fellow and organizer for Ignite NC. Since then, I have been grateful for my transition to NC and how it has helped me move forward in deeper alignment with my goals and passions.

Blu: Currently, I work for Blueprint NC, which is the largest civic engagement State Voice table in the country. We focus on providing capacity and movement-building support to our 50+ partner organizations. My role in Blueprint NC is to support the development of the NC Black Leadership and Organizing Collective (NC BLOC), a Black-led statewide mass movement formation of strong, publicly-active, left, Black-led organizations dedicated to improving the quality of life in Black communities in NC. NC BLOC is tasked with developing strategies and allocating resources to front-line community organizations and leaders so that we can strengthen statewide collaboration, win policy changes, build alternatives, and create the conditions that make mass movement possible.

NC BLOC is a part of the Leadership Table for The Movement for Black Lives, and we are currently on the Leadership Team of the Majority, a new Black- and POC-led national formation of Left organizations that are working to together to build a unified left working towards an anti-racist people’s democracy. Additionally, I work with the Our Data Bodies Research Project (ODB) as a participatory research community specialist and organizer. ODB focuses on identifying the ways that big data and data collection affect our communities and prioritizes creating tools that help to advance our move from paranoia to power. We have just published our Digital Defense Playbook, Tools for Community Self-Defense Against Data Collection, and will start to host the trainer series.

Dillahunt: What is the role of data and policy in your work?

Blu: Data and policy play a very important role in this current iteration of white supremacy, patriarchy, and fascism. Data and data capitalism have become new tools used to further marginalize, police, and criminalize our communities and organizations. Based on data collected, and sometimes outright misinformation, policies are created to further disenfranchise our folks. Over the past 5 years in North Carolina, we have seen some of the most harmful legislation to date. These problematic policies supported by the use of big data are used as tools by the alt-right to keep us distracted, defensive, and burnt out, and thus far, they have been effective. So, in my work, I use data to assess our current state and to build the alternative infrastructures we need in order to thrive.

Dillahunt: What is North Carolina’s role in the Black freedom struggle?

Blu: Activist, organizers, and Black leaders from North Carolina have always been at the forefront of the Black freedom struggle. Currently our organizers, organizations, and leaders are engaged in mass movement building, direct action, infrastructure building, the sharing of best practices, and holding key leaderships roles within the larger Movement For Black Lives — here in NC, nationally, and globally. NC is uniquely positioned to train and develop other community organizers and organizations on how to build across state and county lines, provide meaningful mass political education, and develop strategies that are created by community members themselves. The conditions we currently live in make it hard for us to survive as individuals but mandatory for us to be in as much alignment as possible, as leaders in the fight for social and political equity and for the liberation of all our folks.

Dillahunt: How can people support your work?

Blu: Send donations or become sustaining members of Blueprint NC for NC BLOC, Movement for Black Lives, On the Behalf of the Majority, The Tribe, Ignite NC , Los Angeles Community Action Network, Detroit Community Technology Project , or Center for Community Transitions, on the behalf of the Our Data Bodies Project. Also get involved to help smash capitalism and its related systems of oppression!