One hundred years ago this month, Marcus Mosiah Garvey and thirteen associates gathered in a Harlem basement to found the New York branch of the Universal Negro Improvement Association (UNIA).

When the stocky and dark-skinned Garvey arrived in the United States in 1916, he had no plans to stay. He intended to raise funds for a school in Jamaica, modeled after Booker T. Washington’s world-renowned Tuskegee Institute.

With Washington dead, Garvey sought out W.E.B Du Bois at the New York office of the NAACP. Du Bois was absent, and Garvey said he was “unable to tell whether he was in a white office or that of the NAACP.” The plethora of White and light-skinned people on the NAACP’s staff, and all the light-skinned Black people in desirable positions in Black America, no doubt contributed to Garvey’s decision to remain in Harlem and establish his UNIA chapter there in 1917.

Reuter was the latest in a long line of racist ideologues of colorism in the United States, an ideological line that begins with towering Princeton theologian Samuel Stanhope Smith. In 1787, before members of the American Philosophical Society, some of whom would go on to write the U.S. Constitution that year, Smith praised “domestic servants” for having “advanced far before” the darker and Africanized “field slaves” through “acquiring the agreeable and regular features” of “civilized society”–light complexion, straight hair, thin lips.

Colorism, like all forms of racism, rationalizes color inequities with racist ideas, by claiming the inequities between dark and light-skinned people are not due to discrimination against dark-skinned people, but the inferiorities of dark skinned people.

Racist ideas are not all the same because Black people are not all the same. There are many types of racist ideas demeaning the different types of Black people, including Black women and Black men, and light-skinned and dark skinned people. A light skin is beautiful because of the striking resemblance to beautiful White people is a different type of racist idea than a dark skin is ugly because the striking dissemblance from beautiful White people. 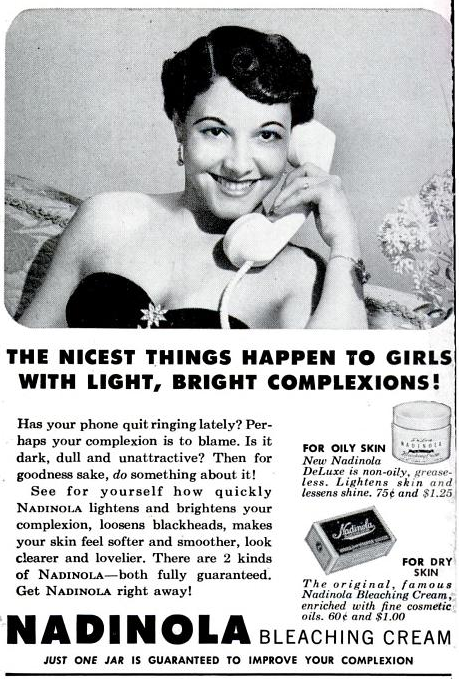 This brand of colorism was antithetical to Garvey’s philosophy, and Garveyites made it their mission to attack colorism and the man they believed to be one of its chief arbiters–W.E.B. Du Bois. It was only a matter of time before Garvey and Du Bois became locked in debate, as Du Bois and Washington had done a decade earlier. Ironically, though, the Washington-Du Bois debate is remembered, while this more enduring debate between Garvey and Du Bois has largely been forgotten.

Du Bois and the Talented Tenth felt threatened by Garvey’s exposure of the touchy reality of light skin privilege. “Garvey is an extraordinary leader of men,” Du Bois admitted in The Crisis at the end of 1920. But it had been a mistake for him to try to bring Caribbean color politics to the United States. “American Negroes recognized no color line in or out of the race,” Du Bois wrote, “and they will in the end punish the man who attempts to establish it.”

He sounded as oblivious as the racists who had angered him for decades by discounting the existence of the other color line. In denying this color line, Du Bois discounted the existence of color discrimination, in effect blaming darker Blacks for their disproportionate poverty.

Du Bois had eyes. He knew light-skinned people dominated the most desirable political and economic positions available to Black people. In his own Talented Tenth essay in 1903, he named twenty-one present and past Black leaders, and all of them except Phillis Wheatley were light-skinned and biracial.

Du Bois was probably not oblivious. More likely, he and his light-skinned peers felt their light-skinned privilege was threatened by discussions of colorism and color equality, not unlike Whites who felt their White privilege threatened by discussions of racism and racial equality. And so, Du Bois copied his enemies: he used racist ideas and his punishing power to silence the antiracist challenge to color discrimination.

However, Garvey was not completely antiracist in this debate. By 1920, Du Bois was reeling from the rise of eugenics and influenced by anthropologist Franz Boas, allowing him to shed his earlier biological conceptions of race: that the racial groups were genetically distinct (Geneticists have since proven that the races are 99% genetically alike, and there is more genetic diversity between people of African descent than between Black people and other people).

Garvey still believed wholeheartedly in the fallacy of biological racial distinctions–in there being such a thing as Black blood and White blood. He thereby joined with eugenicists and Klansmen in looking down on biracial people and light-skinned people, in hailing President Warren G. Harding when he said in 1921: “racial amalgamation there cannot be.”

I used to be reeling from this other side of colorism. I can still remember when I was an awakening undergraduate student at Florida A&M University. I made it my mission not to date light-skinned women. My friends thought I had lost my mind. I desired dark-skinned women: the darker the better, and I looked down on my friends who desired light-skinned women: the lighter, the better. I hardly realized my own racist hypocrisy–that in turning colorism on its head I was still exhibiting colorism.

We should also not keep Du Bois as a static figure. By the 1930s, he had shed much of his elitism, and his elitism and colorism seemed to be interspersed. He had moved to the right side of history, this time engaging in the very public debate against the new NAACP executive secretary, Walter White. A strident integrationist and assimilationist, raging the newfangled Black nationalism of Du Bois, White once reportedly expressed that “unmixed” Negroes were “inferior, infinitely inferior now.”

Comments on “Colorism as Racism: Garvey, Du Bois and the Other Color Line”