This is an edited excerpt of an interview I conducted with Charlie Cobb in October 2015. Perhaps best known as a key organizer in the Student Nonviolent Coordinating Committee (SNCC), Cobb also co-founded the Drum and Spear Bookstore in Washington, D.C. in 1968. Since the 1970s, Cobb has enjoyed a lengthy career as a journalist and the author of several books, including This Nonviolent Stuff’ll Get You Killed: How Guns Made the Civil Rights Movement Possible.

Joshua Davis: I wanted to start by asking you about the poetry and writing you were already doing at the time you were involved in the SNCC.

Charlie Cobb: Yeah. Well, see, in SNCC, like almost all of us were field secretaries, firstly. We were all writing field reports every month. That’s Jim Forman’s influence. He was a trained historian, so he was always on us to write field reports. So, there was a whole body of written reports: mine, not just mine, but a number of people that were in SNCC and in the field in southwest Georgia and Mississippi and Alabama. So, there’s that.

Then there’s a whole strain of poetry in SNCC: Jane Stembridge, Worth Long, myself, others. Now, my first poetry was published by Maria Varela and she was living in Tougaloo then. And she had first published a book by Jane Stembridge, I Play Flute, which gave the name Flute Publications. Then she asked if she could publish a collection of my poetry, which she published as Furrows. This is in 1966, ’65, something like that. The printer was Henry J. Kirksey, who would later become a state senator in Mississippi—maybe the first black state senator, I don’t remember now—but then he had a small print shop.

Davis: Did you have a key role in organizing or developing the Freedom Schools?

Cobb: Yeah, I proposed the idea and wrote the first proposal to the SNCC, which essentially said, “This is what we should do in the summer of 1964. This is why we should do it.” That proposal emerged because we were faced with the question, “Okay, if you’re going to have a thousand or so students, what are you going to do with them? Because they don’t have any experience organizing.” And the logical thing to do with them, it seemed to me, since they were coming off college campuses, was to use them to fill some of these huge gaps that existed in young people in Mississippi—both gaps in the sense of reading, writing, and arithmetic, and gaps of consciousness, because obviously Mississippi public schools were not giving a great deal of emphasis to black history or black struggle. So, as for the Freedom Schools—we had always been concerned about education. What the summer volunteers enabled us to do was actually approach, in a meaningful way, some of the education issues that we had long been aware of.

Davis: “Gaps of consciousness,” that’s a great phrase. So in 1967 you went on a trip to Paris and you visited the pan-Africanist journal and bookstore Présence Africaine?

Cobb: Yeah. I went, although the trip wasn’t to Paris. It was to Vietnam. Bertrand Russell financed that trip to bring us to the International War Crimes Tribunal he organized. He was a philosopher and he had a philosophical question: “What would people who were doing what we were doing in the deep South—organizing—find similar and what would they find dissimilar between themselves and a group like the Viet Cong?” The initial idea was to travel with the Viet Cong and see what they did. Julius Lester and I agreed to go on that trip, but the war kept us from going across the border from Cambodia into South Vietnam. So, the Viet Cong people said it was just too dangerous and they didn’t want to be responsible for anything happening.

So, Plan B was to go to North Vietnam, and we spent maybe two or three weeks in North Vietnam. This was ’67. And then, coming back to the States, I went to Paris and I visited. I was aware of Présence Africaine, the magazine. My mother was chair of Romance Languages at Howard University. I was aware of Présence Africaine for both linguistic reasons and political reasons, since it was a Pan-African journal not only around art and literature but around technology, politics, and all of that. So, it was an obvious place to visit if you were young and black in 1967. Then Courtland Cox and I decided, because Courtland was the SNCC representative at Bertrand Russell’s war crimes tribunal in Stockholm, that before going to the States we would visit Africa. We wound up drifting down the whole west coast of Africa.

At the end of that trip, which took all summer—we went to Guinea and, I forget, Ivory Coast, and Liberia, fourth class on a boat. When I came back to the States—and remember now the movement in the States in the wake of Black Power’s shout out by Stokely Carmichael was very much involved with issues of black consciousness, black thought, and I was no less affected than anybody else. In that framework, the Présence Africaine visit pushed to the forefront of my mind. I said, “Well, we could do something,” and that seemed doable.

Doing something like the Présence Africaine, what I had seen in Paris, with artists coming in and out, political people coming in and out, and books to inform the struggle, seemed doable in a city like Washington, DC, my hometown.

So, that’s where the Drum & Spear idea begins to emerge as a body of work. I’m on the tail end of my involvement with the SNCC at this point, although I’m having this discussion with SNCC people. All the people I’m talking to about this—Judy Richardson, Courtland Cox, and others—have either been directly involved in the SNCC or represent kind of the second—generation is not the right word, but they’re engaged in student activism, like Tony Gittens, for instance. Tony represents a second generation of campus activists. There were a number of them that we were interacting with on other college campuses as well, like Howard Fuller (Owusu Sadaukai) down here in Durham, people up at Cornell, and others. 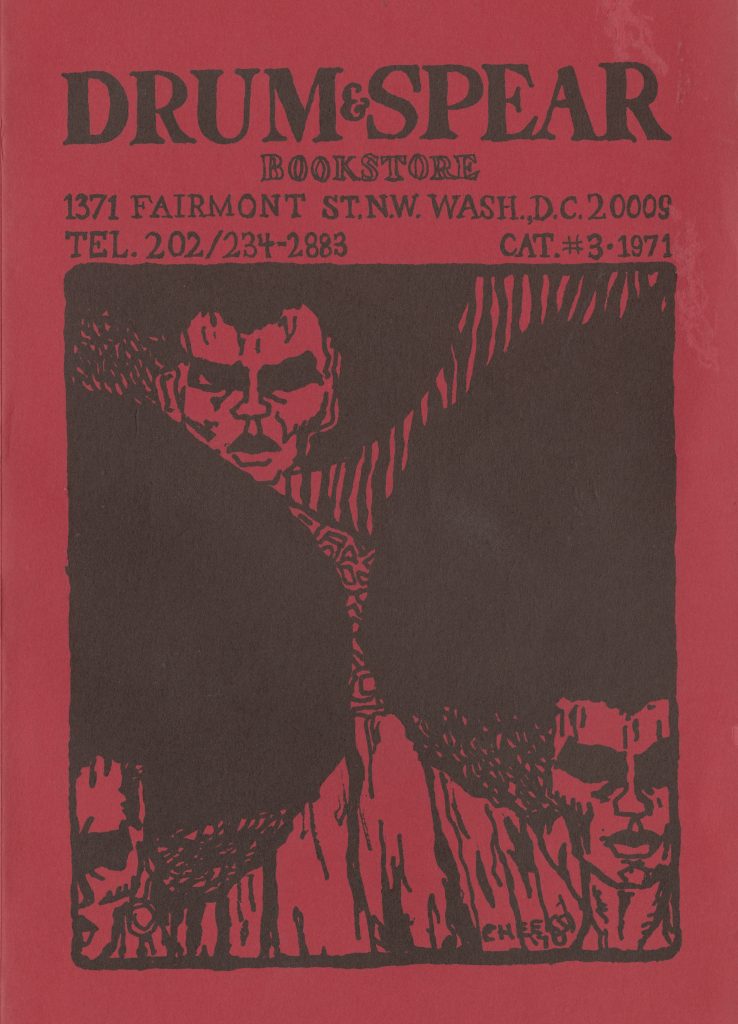 Davis: Had you ever been to a black-owned bookstore in the United States before?

Davis: Had you been to Michaux’s?

Davis: Did you think about whether Drum & Spear would be like Michaux’s?

Cobb: Well, in the sense that it would be a crossroads for, if you will, a range of people engaged in black struggle to meet and that it would be a source of information, yeah, in that sense, it would be like Michaux’s. It would be very different in the sense that we weren’t as nationalistic as Michaux’s Bookstore. We weren’t similar in Washington, I believe, to the scene in, say, New York on 125th Street, with stepladder speakers at Michaux’s and the Nation of Islam. No, we didn’t have that sense.

But we did share with Michaux’s and others the sense that it was important to get information in various forms, in various written forms—pre-social media, pre-computers—out to bookstores. It was a natural and logical vehicle to do that.

We wanted a shop that warmly welcomed authors and we emphasized authors as distinct from, say, political figures. We wanted a shop that a range of authors could feel comfortable reading in, and we wanted a range of books. It was interesting because there were people who took exception to some of the books we carried. I remember there were some Black Panthers who felt we should have Mao’s “Little Red Book” in the front, but it was on the side. We said, “You know, it’s our bookstore. We’ll put the damn books wherever we want.” There were people who objected, for instance, to us carrying somebody like Iceberg Slim’s Pimp.

There were mixed feelings about Chester Himes and his Gravedigger Jones/Coffin Eddie books too. So, we felt we had everybody. What’s the point of having a black bookstore if you’re going to now start to decide who’s too black or not black enough to be in the shop? So, we had everybody, and it was supposed to be just that kind of place.