“The BLM platform is a stunning articulation of what a vision of black freedom means and an acknowledgement of the ways black lives are constantly under siege.”

The United States government has a long history of disrupting protest and illegally targeting leaders of social movement organizations. The monitoring of Black Lives Matter (BLM) protests is the latest example of a troubling pattern of race-based surveillance.

The recent platform released by BLM activists, is a particularly stunning articulation of what a vision of black freedom means and an acknowledgement of the ways in which black lives are constantly under siege. BLM activists have placed six demands at the center of the freedom struggle. But two demands stand out: End the War on Black People and Political Power.

More specifically, the demand to end the war on black people, calls for an “end to the mass surveillance of Black communities, and the end to the use of technologies that criminalize and target our communities (including IMSI catchers, drones, body cameras, and predictive policing software).” At the center of the demand for more political power, is the appeal “an end to the criminalization of Black political activity including the immediate release of all political prisoners and an end to the repression of political parties.”

These demands raise questions about the role of government interference in social movements and the violation of constitutional rights. A central question is: Does the government conduct illegal surveillance in black communities? Recent research has revealed links between COINTELPRO, the NYPD Demographics Unit, and BLM surveillance. My research makes clear that anxieties about black political movements have informed the expansion of the U.S. government’s surveillance apparatus.

COINTELPRO represents a broad range of FBI programs, mostly illegal, intended to disrupt political organizing and repress dissent between 1956-1971. As the civil rights movement gained steam and pressed forward in the 1960s, the FBI placed many of its organizations, leaders, and members under surveillance.

The expansion of civil rights surveillance occurred after the long hot summer of 1967. The official memo that went out on August 25, 1967 described the new COINTELPRO objectives: “…to expose, disrupt, misdirect, discredit, or otherwise neutralize the activities of black nationalist, hate-type organizations and groupings…” The initial group of targets included a number of prominent civil rights organizations: Southern Christian Leadership Conference (SCLC), the Student Nonviolent Coordinating Committee (SNCC), Congress of Racial Equality, and the Nation of Islam.

Of particular interest was Martin Luther King, Jr.—leader of the SCLC. Under COINTELPRO, SCLC was classified as a “Black Nationalist Hate Group” and King was identified as a grave threat. Not long after King gave his “I Have a Dream” speech on the Washington Mall, a top COINTELPRO official wrote in a memo, “We must mark [King]…as the most dangerous Negro in the future of this Nation from the standpoint of communism, the Negro, and national security…”

COINTELPRO did not just target leaders. A specific purpose of the program was “to prevent the long range growth of these [civil rights] organizations, especially among youth, by developing specific tactics to prevent these groups from recruiting young people.” To meet this goal, COINTELPRO informants infiltrated and spied on numerous groups on college campuses. SNCC was of special interest to COINTELPRO. Informants attempted to trick SNCC leaders into making inflammatory statements, interfered with their outside funding sources, and sabotaged planned student protests.

There are many more examples of egregious violations of the law under COINTELPRO. Early on, civil rights leaders saw through this surveillance façade; arguing that so-called “national security concerns” were a loophole that allowed the government to justify illegal surveillance practices and institutions in the black community.

Immediately after 9/11, the NYPD Intelligence Division established a secret domestic spy division. Specifically, the Demographics Unit was created which mapped and spied on the residential, social, and business landscape of American Muslims in New York City and its surrounding area. The clandestine Demographics Unit focused explicitly on 28 “ancestries of interest” which included almost every Muslim-majority country in the world and “American Black Muslims.” Recently released documents reveal the NYPD Demographics Unit spied on black mosque attendants and black imams throughout New York and New Jersey.

When the Associated Press exposed the secret operation of the Demographics Unit in 2011, over 250 mosques and 31 Muslim Student Associations were being monitored. And yet, despite this incredible expansion of authority, the NYPD’s Demographic Unit never generated a significant lead for a formal terrorism investigation. Documents reveal an expansive surveillance apparatus that profiled specific groups of people—not for wrongdoing but because of what they looked like and where they choose to worship. 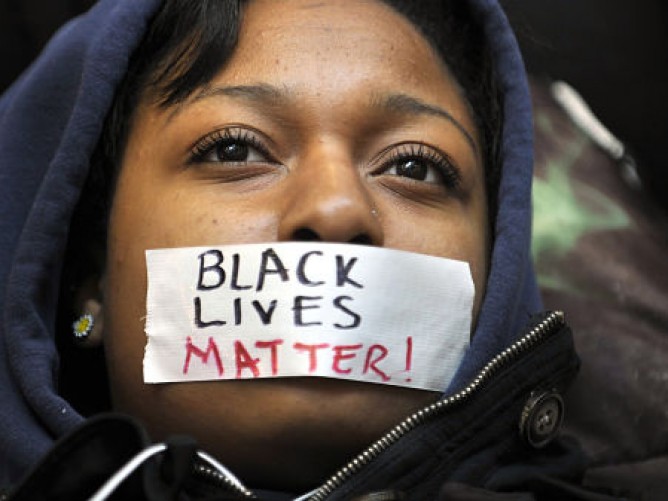 In the current moment, the government has tried to monitor the activities of BLM activists through a number of different troubling methods. In 2015, the Intercept reported the Department of Homeland Security and the NYPD have been monitoring and mapping BLM activists—including their location and social media surveillance since protests in Ferguson. But it wasn’t just Ferguson, after the Freddie Gray demonstrations in Baltimore, it was revealed that the FBI and the Baltimore police conducted aerial surveillance; they flew airplanes that took video and captured infrared pictures of protesters. And many states have recently been in hot water for their illegal use of stingrays during BLM protests. Stingrays are a new form of technology that mimic a cellphone tower, tricking nearby users to connect to it and grabbing phone numbers and data off their cellphones.

But its not just surveillance technology, before the GOP convention in Cleveland, BLM activists reported being subject to aggressive “information gathering” visits as well as intimidation by federal authorities in their homes.

BLM activists are correct to demand an end to warrantless government surveillance. The U.S. government has gone after and attempted to discredit and weaken black political organizing. This is not mere conspiracy—this is historical fact. If we are committed to ensuring that all citizens’ first amendment rights to speech and peaceful assembly are protected, race-based surveillance must end. This is not something that we can ignore as BLM activists continue raising awareness about this important issue–demanding a change in the operation of law enforcement.

Megan Ming Francis is an Assistant Professor of Political Science at the University of Washington. Francis specializes in the study of American politics, race, and the development of constitutional law. She is the author of the multiple-award winning book, Civil Rights and the Making of the Modern American States. Follow her on Twitter @meganfrancis.