loading...
By Betsy Schlabach July 30, 2018 Comments Off on Black Public History in Chicago

As part of the research for his book Black Public History in Chicago: Civil Rights Activism From World War II Into the Cold War, Ian Rocksborough-Smith was very fortunate to interview Dr. Margaret T. Burroughs. Burroughs was a teacher, art historian, and artist. She was famous for her art but more famous for founding the DuSable Museum of African American History in 1961 with her husband Charles and other leading Chicago citizens. The Museum, originally housed in the Burroughs’s home, “was developed to preserve and interpret experiences and achievements of people of African descent and serve as a community touchstone for the South Side of Chicago.” Burroughs passed away in 2010 at the age of 95, and her departure from Black Chicago, where she left an indelible impact, will be felt for a long time.

Rocksborough-Smith offers more than just a glimpse into Burroughs’s life; he offers a reorientation of Burroughs as both a Black public historian and an activist. Rocksborough-Smith places Burroughs among the laborers of Black Chicago’s public history firmly anchoring that work to what he calls an “activist repertoire.” By this he means that Burroughs and others figuring prominently in his book possessed an innovative intellectual and protest range that informed, motivated, and reconfigured life for Black Chicagoans from the Great Depression into the Black Power Movement. Burroughs is his touchstone and anchor throughout; his study puts radical leftist politics together with Chicago’s thriving and already politically charged African American community and culture during the Cold War.

His focus on Burroughs never waivers, although exciting corollary observations animate other parts of the text. Chapters exploring Carter G. Woodson’s founding of the Association for the Study of Negro Life and History (ASNLH) renamed the Association for the Study of African American Life and History (ASALH), the curricular reform projects of Chicago’s African American teachers, debates on the founding of a Black-history museum in Chicago in the early years of the Cold War, the establishment of the Afro-American Heritage Association in 1958 (AAHA), Black public history labors during the Black Power era, and a final chapter looking at how the DuSable Museum conducted its first relocation and expansion in the 1970s powerfully expands an existing narrow narrative of mid-twentieth century Black American social movements and politics. These chapters also powerfully dispel any static notion of Black identity formation through public history, revealing how public historian activists like Burroughs worked for and through a usable Black past to help transform urban social space in the mid-to-late twentieth century. African American public history efforts as activism find new life when related to civil rights and racial justice struggles in the repressive years of McCarthyism and Jim Crow. These are powerful tools to help scholars navigate with more agility and nuance the behemoth that is Chicago History and Black Chicago History in particular.

Black Public History in Chicago joins a well-established body of work on Black Chicago History and new scholarship on the Black Chicago Renaissance in particular. In his introduction, however, Rocksborough-Smith identifies a “historiographical impasse” that he believes suggests that historians have not engaged with how Black Chicago interacted with the political left, nor have scholars explored the constraints and conflicts of that engagement. While many of the studies he quotes “uncover complex histories of community formation, civic politics, civil rights activism,” or the Black Chicago Renaissance, Rocksborough-Smith demands that Black public-history activism be situated within those debates, shows how his work does, and promises powerful results for the present. The results push the field in new directions: he offers a new periodization that includes the Cold War and a powerful reconsideration of the geographies of Black public history and activism that make one rethink generational and interracial conflicts. Rocksborough-Smith offers a concise scholarly monograph on Black Chicago public history’s tangled relationship with the left and utilizes that conflicting relationship to examine politics in our present and future. 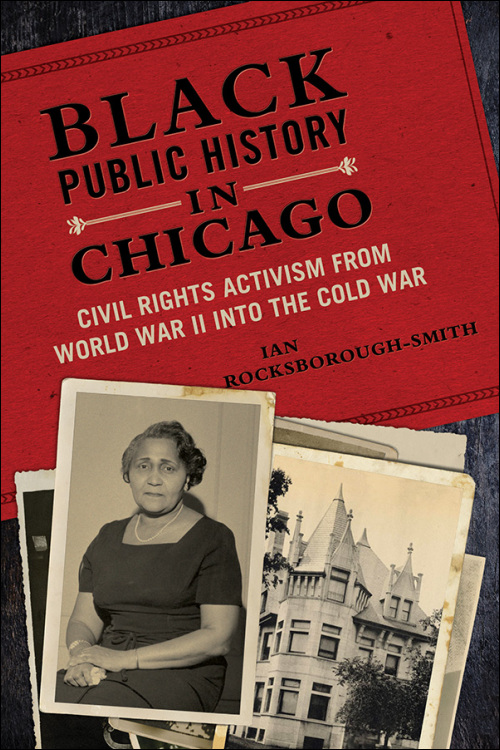 Chapters one and four shine most brightly in the monograph. Chapter One, “Curriculum Reforms in World War II,” introduces the contested terrain of school curriculum during the early Cold War era. Through both oral history and archival research, Rocksborough-Smith highlights the grassroots activism of Chicago Black public school teachers such as Timuel Black, a Chicago legend, who revealed to him that he had to teach Black history on the sly. He also showcases Madeline Stratton Morris’s, of Dunbar Public High School, curriculum-reform movement in the early 1940s. Stratton Morris was able to obtain a year long sabbatical to network with experts such as Woodson, ASNLH head; Charles Wesley, then president of Wilberforce University; and professors at the University of Chicago, Northwestern, and the University of Illinois. Her goal was to develop a curriculum that would “imbue prospective pupils of her civic units with a global and transatlantic sensibility for Black subjectivities and to promote youth self-esteem.” Using Stratton Morris’s papers housed at the Vivian Harsh Research Collection, Rocksborough-Smith highlights Stratton Morris’s intellectually rigorous and cutting edge pedagogy aimed at elementary and secondary levels but which was no less sophisticated or impactful.

Chapter Four, “Cultural Fronts and Public-History Activism,” examines the complex, uncomfortable, and oftentimes conflicting intergenerational discussions that revolved around Black public-history labors in Chicago in the Black Power era. Here, Rocksborough-Smith cites James Smethurst’s The Black Arts Movement: Literary Nationalism in the 1960s and 1970s, the definitive study of the Black Arts Movement. Readers find respite from the book’s historiographical emphasis when Rocksborough-Smith returns to his talent for storytelling and primary source work. He begins the chapter with responses to a 1968 letter-writing contest in the most famous Black newspaper at that time, the Chicago Defender. The Defender prompted readers to answer the question: “Do you believe in Black pride?” Among the various responses published by the paper was Margaret Burroughs’s piece. Through this anecdote, Rocksborough-Smith locates his discussion of Black pride not with the Black Panthers or the Black Arts Movement, but with a Black history activist of a generation prior—Margaret Burroughs. It is powerful support for his thesis that the range and repertoire of Black public history and activism cannot be ignored. The most vivid example of this is when Margaret Burroughs joined other Black Chicago leaders to eulogize Fred Hampton and fellow Black Panther Party member Mark Clark who were murdered in their sleep by the Chicago Police Department on July 31, 1969. Burroughs’s mentorship to younger BAM radicals puts her on the same trajectory of Langston Hughes who was a powerful mentor to Black Chicago Renaissance writers such Gwendolyn Brooks and Margaret Walker.

Rocksborough-Smith writes most powerfully in the present, making clear connections with twenty-first century politics, civil rights, and the role of activism/public-history. For example, Chapter Two, “Imagining a Black Museum in Cold War Chicago,” offers a template for thinking about and reframing the opening of the National Museum of African American History and Culture and its exhibits into the future. In his epilogue he picks up Stratton Morris’s curriculum-reform movement again to vividly animate the recent Chicago Public Teacher Strikes. Finally, he concludes his study with the DuSable Museum’s latest hurdle—the arrival of the Obama National Library in nearby Jackson Park with the University of Chicago looming in the background. The proximities of the parks suggests ways in which Black Chicago public history activism might refashion the debate.

Betsy Schlabach is an Associate Professor of History and African & African American Studies at Earlham College. She is the author of Along the Streets of Bronzeville: Black Chicago’s Literary Landscapes (University of Illinois Press, 2013). She currently completing a new book on policy gambling, focusing on African American women’s role in the informal economy of Black Chicago from 1890-1950. Follow her on Twitter @schlabetsy.