During the mid-twentieth century, the economic growth following World War II marked an incredible period of production and consumption in the United States. As a result of the postwar boom, nearly 60 percent of the American population had achieved a ‘middle-class’ standard of living by the mid-1950s. Despite the nation’s economic expansion, African American families continued to struggle for inclusion in the economic prosperity more easily attained by whites. Moreover, African Americans faced limited opportunities to participate in society and struggled to gain access to quality education and the right to vote.

In response to these challenges, African Americans devised a range of strategies in an effort to improve social conditions for black men and women across the country. One particular strategy was racial uplift, which was a form cultural politics in which predominantly educated African Americans believed race progress could be achieved by embodying respectability. Newspapers and magazines were crucial vehicles in spreading the message of racial uplift. The goal of racial uplift, however, was not so easily achieved as issues like colorism, gender oppression, and classism pervaded African American life and further hindered efforts for race progress.

Editor and publisher John H. Johnson was one of many race men and women who promoted racial uplift politics. Johnson was born in rural Arkansas in 1918 into a family of farmers and domestic workers. As a child, Johnson loved education despite attending under-resourced and segregated elementary schools until the 8th grade. Because there was no high school in his county that served African Americans, and his family struggled to find stable jobs, Johnson’s family migrated to Chicago in search of better educational and employment opportunities.1

It was during his time at the historically black DuSable High School on Chicago’s South Side that Johnson discovered the class distinctions among African Americans in the North and South. Seeing his middle-class peers inspired Johnson to achieve his own goals as an entrepreneur. After graduation, Johnson received a full tuition scholarship to the University of Chicago, but instead took courses at Northwestern University’s School of Commerce where he learned the skills necessary to start his own business.2

Utilizing his background as a businessman, Johnson founded the Johnson Publishing Company in Chicago of 1942.3 Some of the company’s earlier publications were Ebony, which featured success stories of the African American working class, and Negro Digest, a monthly magazine that included articles written by African American scholars. With over 12 periodicals in circulation, Johnson’s publishing enterprise successfully carved its own niche in a literary market that previously failed to acknowledge the wide range of experiences of African American life. 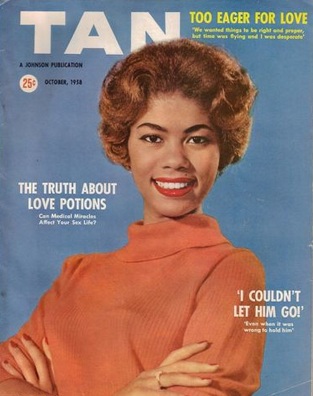 Through his publications, Johnson popularized the idea of racial uplift during the 1950s. In the magazine Tan Confessions, Johnson emphasized the need for African Americans to celebrate their educational and economic achievements. In contrast to the more radical magazine Black World, which focused on the African diaspora and black political organizing around the globe, Tan sought to “reflect a new side of Negro life that is virtually ignored in most publications today.”4 This new side to which Johnson referred involved the concerns of the newly formed African American middle-class. Tan also featured an extensive home service section devoted to child care tips, health practices, cooking recipes, interior decoration, fashion, and shopping.

What also distinguished Tan from other publications in the Johnson Publishing Company’s catalog was its relationship to advertising. The advertisements in Tan provide a glimpse into the lifestyle and values held by the expanding African American middle-class during the mid-twentieth century. Ads for products like designer clothing, custom jewelry, and night school courses became signifiers of the growing African American elite. The images and language used in these ads reveals that while Tan was created with the goal of including African Americans in the social, educational, and economic spheres of the United States, it was limited in this goal due to the respectability politics, colorism, and gender oppression that frequently thwarted efforts for racial uplift. In Tan’s earlier issues, ads often policed black women’s physical presentations by encouraging the use of products like skin bleaching creams, chemical hair products, and body shapers.

For example, advertisements for Dr. Fred Palmer’s Skin Whitener were commonly found in publications marketed toward African Americans in the 1950s. The image in this particular advertisement (see Fig. 1) displays a sleeping woman with a dream cloud floating above her head. Located inside the dream cloud is an image of the same woman, only this time awakened with a confident and lighter appearance. The text next to these images suggests that the woman has fantasized about wanting a lighter skin complexion. The ad suggests that by using Dr. Fred Palmer’s Skin Whitener, her dream of becoming beautiful can be made a reality. Another powerful observation of the advertisement lies in the language used to describe the product. The use of ‘skin whitener’ as opposed to ‘skin lightener’ concretely expresses the conflation of beauty to whiteness and, in effect, middle-classlessness. These advertisements aid in the perpetuation of divisive colorism, which was another tactic commonly employed by elite African American social clubs to exclude other African Americans who failed to meet specified skin color requirements for entry.

In the following years, ads for beauty products, household items, and expensive jewelry increased exponentially in Tan. What were once quarter-page advertisements evolved into full-page spreads, constituting almost one-third of the entire publication. Although its circulation ended in 1952, Tan (later renamed Black Stars) remained at the forefront of publications aimed at the African-American middle class and would go on to profile stars like Lena Horne and Eartha Kitt.

Although filled with contradictions, publications like Tan demonstrated the social and cultural barriers to racial uplift. Moreover, magazines like Tan and Black World disrupted the myth of African American cultural politics during the twentieth-century as monolithic. These periodicals illuminate the different perspectives held by African Americans who advocated racial uplift as a strategy for combating racial oppression and discrimination in the United States.

Kevin C. Quin is a PhD student in Africana Studies at Cornell University. His research interests include African American Gay and Lesbian history, culture, and politics. Follow him on Twitter @kevincquin.

Comments on “Black Periodicals and the Politics of Racial Uplift”