loading...
By Don S. Polite, Jr. March 6, 2019 Comments Off on An Intellectual History of Liberation Theology

The Women’s March, led by women of color activists such as Linda Sarsour and Tamika Mallory, brought millions out to demonstrate worldwide in 2017. Black Lives Matter, which emerged as a response to the murder of Trayvon Martin, has now become a broader critique of systemic racism. In the last few years, there have been massive movements to protect the status of undocumented immigrants, or to oppose the White House’s Muslim ban. In contemporary United States political discourse, religious ideology and identification is often seen as a voice of moderation and conservatism. However, that was not always the case. During the 1960s and 1970s when post World War II political consensus was declining, “Latin Americans and North Americans, Catholics and Protestants, Black and white men and women participated in an intense discussion among themselves and with their detractors about how theology was to facilitate the immediate struggle for human liberation.” (4) The turbulent moment that caused African-American, Latin American, and feminist theologians to challenge a liberal democratic order and stagnant religious institutions is still reflected in our contemporary moment. A World Come of Age: An Intellectual History of Liberation Theology uses the past to speak to this moment. It reveals how theology, as opposed to being the tool of wealth, can demonstrate a preferential option for the poor.

Lilian Calles Barger’s A World Come of Age calls attention to liberation theology, a term normally tied to a mid-twentieth century theological movement in Latin America. In this book, however, she broadens the lineage across the Americas. Individuals across race, gender, class, and national lines initiated a dialogue that challenged a religious and political order that failed to address the needs of the most vulnerable. These liberationists “reshaped the terms of engagement and opened the floodgates for a full-throttled entry of religious claims into the political sphere.”(5) The theological ideas that formulated in the 1975 meeting of Latin American, African-American, and feminist activists in the Detroit Theology in the Americas conference had a long history. As a cultural history of liberationist ideas, A World Come of Age traces these events across the hemisphere that influenced the formation of a theology that sought to dismantle systems of oppression such as racism, sexism, and empire.

The central theme of A World Come of Age is that liberation-minded intellectuals were committed to changing the conversation around the role and relationship between religion and politics. First, Barger examines the belief of the impoverished that religious values could and should be brought into the political sphere. Second, historical inequalities throughout the Americas gave rise to this theological and political approach. Third, the first generation of liberation theologians reshaped the debate on the place of religion in politics, which allowed for more engagement. Barger treats liberation theology as one aspect of social thought, since it responds not just to religious ideas, but with other converging intellectual movements. In that respect, it links broad events such as the rise of reformist Christian Democratic parties in mid-twentieth century Latin America, with African-American theologians’ commitment to anti-colonial movements during the same period. Even more importantly, Barger broadens the conversation on what counts as theology. By considering everyday expression of religious thought and practice alongside formal theology, readers comprehend how oppressed and dispossessed people can shift a conversation onto their own terms. 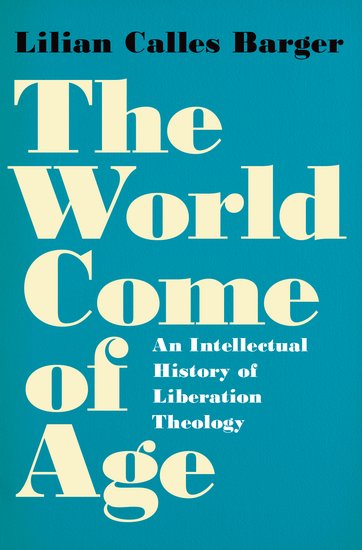 The book is separated into four sections that detail the long and winding paths that led to a convergence of several liberation theologies by the mid-twentieth century. Being mostly attuned to large-scale changes in theological discourse across the Americas, Barger links the narrative through central figures such as Peruvian theologian Gustavo Guttierez, African-American theologian James Cone, and feminist Catholic theologians Mary Daly and Rosemary Radford Ruether. These figures, while not being in direct conversation with each other, demonstrated several strands of liberation theology. Whereas Guttierez was concerned with the condition of the poor in Latin America in a globally exploitative system, Cone was more concerned with the plight of African-Americans in the U.S. Daly and Ruether, on the other hand, demonstrated a commitment to the condition of women as an oppressed class. Barger connects them to a larger intellectual movement that sought to recover religion as a positive force to actualize human freedom in the present. These figures bring internal consistency and grounding to this ambitious study. With an aim at illuminating changing relations between religion and politics in the Americas, Barger tackles much of the historiography of a hemisphere.

Through subsequent chapters, Barger asserts that the history of oppression in the Americas led to the rise of liberation theology in the mid-twentieth century by touching on, and adding a new layer to, older historiographical fields. Marching through a history of the Americas, Barger addresses Latin American conquest and the road to independence. Along the way, Barger makes contributions to the formation of republican ideology and the crafting of new national identities. Progressing, Barger notes how such events as the rise of Jim Crow, the World Wars, and the Cuban Revolution gave rise to new interpretations of theology. Additionally, she examines how social theory and the rise of social sciences were folded into discussions of religion’s place in social and political life. In tracing the lineage and circulation of ideas through several centuries, Barger convincingly elucidates the tensions of religious activism from the vantage point of those most disadvantaged. Her argument is most potent in its focus on the 1960s. Here the feminist movement, the Civil Rights Movement, and Latin American revolutionary fervor converged in the 1975 Theology in the Americas conferences with activists seeing each other as potential allies against a larger global capitalist system. However, they were unable to forge a lasting alliance. Even when speaking the same language of liberation, groups still found difficulty in maintaining coalitions.

Though A World Come of Age is an impressive study, it does have a few drawbacks. When attempting to talk about these coalitions across the Americas, there are points where the connections perhaps seem stretched. Barger noted this tension in stating, “I am cognizant of the risk of ascribing more historical coherence than is warranted.” (9) On the positive end, she demonstrates a deft ability to weave these historical trends when highlighting their ideological links in the Western Hemisphere, which is a hallmark of Atlantic history. To connect such disparate events like the Tupac Amaru Rebellion in the late 18th Andes and the Haitian Revolution, alongside later movements of the twentieth century such as the 1959 Cuban Revolution and the 1973 overthrow of Salvador Allende in Chile, is an extraordinary venture. These moments do indeed speak to larger critiques of global systems, while aiding in the secularization of religion. However, the book’s breadth renders it a bit unwieldly. In spreading out the narrative temporally and geographically, it is difficult to assess local or regional specificity, or what contemporary trends may be influencing people’s thoughts and actions at a specific moment. The work was ambitious in tracing these trends over a long duree. But given its transnational focus that incorporates trends in Latin American, African-American, and feminist thought, it does read at times as too ambitious.

Nonetheless, Barger has produced a work that is both impressive and relevant. Barger highlighted the international fervor surrounding Pope Francis’ meetings and talks with Gustavo Guttierez. That fervor was only substantiated in the minds of conservative Catholics and commentators such as Rush Limbaugh and George Will when Pope Francis tweeted on November 17, 2017 that, “Poverty is not an accident. It has causes that must be recognized and removed for the good of so many of our brothers and sisters.” Even in Protestant circles, Reverend William Barber, minister and leader within the National Association for the Advancement of Colored People, has led the Poor People’s Campaign calling for a moral revival that seeks redress for the poor and dispossessed. Even within supposedly secular movements as Black Lives Matter, Barger sees the refusal to separate the spiritual from the political. BLM then, as opposed to being a rejection of the Black Church, could instead be viewed as an “organic outgrowth of the political history of the black church undergoing religious transformation.” (258)

But the question remains: can a cohesive movement be maintained that challenges oppression across lines of race, sex, gender, nation, and more. During the 1973 Theology in the Americas conference, that bridge could not be adequately crossed as the attendees found that, “The greatest tension was over whether race, class, or identification with empire primarily established privilege.” (237) Addressing those tensions still poses a challenge to intellectuals and activists alike in finding allies and forging coalitions. But the path has been walked before. Barger’s work should encourage a wide array of scholars to revisit the place of religion in politics and activism and rethink the ways the dispossessed and disfranchised seek to revolutionize the status quo, rather than simply reform it.

Don S. Polite, Jr. is a PhD Candidate in History at the University of South Carolina. His research interests include Latin America and the Caribbean, the United States since 1876, and Race, Empire and Citizenship. His undergraduate thesis was entitled, "Arturo A. Schomburg: Redefined Revolutionary Afro-Puerto-Rican Black Historian," written under the guidance of Professor Leslie Brown. His dissertation explores Schomburg’s broader significance as a diasporic thinker and figure. Follow him on Twitter @Polite_DPJ.