According to Frank Wilderson, Afropessimism contends that “Blacks are not Human subjects, but are instead structurally inert props, implements for the execution of White and non-Black fantasies and sadomasochistic pleasures.” This trenchant claim, foreshadowed in Wilderson’s 2008 memoir Incognegro and developed more fully in his magisterial text Red, White, and Black: The Structure of Racial Antagonisms, has become a polarizing force in academic spaces, on blogs and social media, in activist circles, and even in high school debate culture. For some, Afro-pessimism provides powerful resources to examine the particular quality of anti-Black violence, the endurance of anti-Blackness in the US after emancipation and desegregation, and those aspects of Black anguish that cannot be fully explained by political economy or class conflict. For detractors, Afro-pessimism is a death knell for Black freedom struggles, multi-racial coalition-building, and the kind of hope and energy needed to confront current problems. Some commentators, such as Greg Thomas, accuse Afropessimism of being too US centered and excoriate the pessimist for conflating blackness and slavery, a conflation that supposedly downplays forms of radical activism internal to Black political traditions.

In his new book, Afropessimism, Wilderson does not attempt to suture this fracture or even allay the concerns of critics. (He comes to bring the sword, not peace.) Instead, this beautifully written combination of memoir, self-reflection, and essay attempts to clarify and underscore the Afropessimist’s contribution to Black studies, the humanities, ethics, and so forth. Wilderson’s book serves as an introduction to those unfamiliar with this discourse and those who might be alienated by the difficult language present in previous work by him and fellow Afropessimists. In addition, the book endeavors to show how the concerns of Afropessimism, including the antagonism between the Human and Blackness, are played out in (Wilderson’s) everyday life and interactions. In other words, this work deftly oscillates between theory and lived experience.

Early in the book, Wilderson encourages the reader to think of Afropessimism as a meta-theoretical framework and diagnosis. He writes, “Afropessimism, then, is less of a theory and more of a metatheory: a critical project that, by deploying Blackness as a lens of interpretation, interrogates the unspoken, assumptive logic of Marxism, postcolonialism, psychoanalysis, and feminism. … It is pessimistic about the claims theories of liberation make when these theories try to explain Black suffering or when they analogize Black suffering with the suffering of other oppressed beings.” For Wilderson, Afro-pessimism is not primarily a theory of blackness; nor is it a political prescription for how to respond to anti-Black racism and violence. Rather, it is a heuristic strategy for diagnosing how Black people are positioned, contained, and punished within prevailing discourses and arrangements. It provides a way to register how they are both excluded from and necessary to the category of the Human. While other oppressed groups can fight for recognition and claim a foothold within the domain of the Human, Black people are barred from this plane. Therefore, they are defined by social death within the current social order and arrangement of things. The very coherence of the Human depends on consigning blacks to the edges of the Human, to that space that divides the Human from the non-human. Consequently, the end of anti-blackness would mean the end of the Human world as we know it. 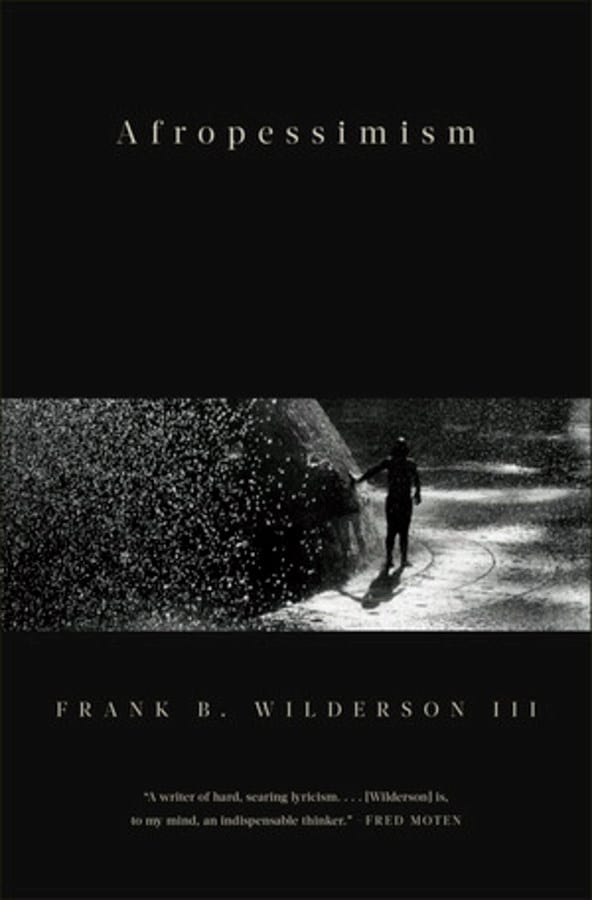 Afropessimism articulates the meta-theoretical through the everyday and interpersonal.  Along this line, Wilderson recounts a series of unsettling incidents and scenes: the white mother of a childhood friend who expects him to entertain her by describing the experience of being Black; the members of a Native American community in Minneapolis that don’t want a “n—– man” (Wilderson’s father) giving them instructions; Wilderson’s Palestinian co-worker, Sameer, who admits he felt an extra degree of shame when patted down at a checkpoint by an Ethiopian Jew; the white neighbors that terrorize and attempt to repeatedly poison Wilderson and his partner, Stella; the audience at a conference in Berlin who dismiss Wilderson’s paper without even pretending to engage the arguments; the oppressive and abusive relationship between the European owners and Black laborers in a restaurant that Wilderson works at in South Africa. These varied experiences share something in common—they exemplify how “Blackness is coterminous with slaveness.” As the author emphasizes, slaveness is not reducible to the plantation system and coerced labor. Following the work of Orlando Patterson and Saidiya Hartman, Wilderson identifies the afterlife of the Master/slave relationship in the enduring function of Black people as props for the flourishing of non-black life, for the existential coherence of white people and their “junior partners.”

While Wilderson’s memories and reflections bring life and substance to the central claims of Afropessimism, there are moments that leave the reader questioning whether the “evidence” points in other directions. Consider the above example in which members of an indigenous community “don’t want a n—– telling [them] what to do” For Wilderson, this demonstrates that the Settler and the Native American “share a largely unconscious consensus that Blackness is a locus of abjection to be instrumentalized on a whim.” And yet the reader is left wondering how Wilderson’s father, a professor, becomes authorized to direct a reservation program sponsored by his University. How does one map and trace the multiple, and conflicting, relations of power and violence in this example? How do Settler projects conscript the Black to conspire against the Native American? This leads to a larger set of questions and queries about the relationship between blackness, citizenship, and settler aspirations, or the fraught relationship between the slave (a kind of property) and the appropriation of indigenous lands. To be sure, Wilderson has been insistent in his work that slavery and settler colonialism constitute the violent conditions of US civil society. And yet for him there is a moment of non-analogy between Native genocide and anti-Black violence. While Native communities lost something concrete (land), the slave’s loss is not determinate. To put it more strongly, the slave and her descendants have nothing to lose since they entered colonial modernity as property, as embodiments of nothingness, and as a bundle of qualities that the will to sovereignty defines itself over and against. But of course, this argument assumes that Black people in the United States have lost all historical ties and claims to the African continent (or other lands), that other people of African descent across the diaspora have not formed significant attachments to lands and territories that they inhabit since the Middle Passage, and that slaveness, or social death, defines Black existence in its entirety.

There are lingering questions about certain details in Wilderson’s account of racial antagonisms. And while these details are important, so are the broader contributions and interventions that Afropessimism makes in the current moment. While there are many, I focus on the refusal of the logic of redemption.

The logic of racial redemption, in its religious and secular expressions, harbors a belief that anti-Black violence can eventually be remedied and compensated for by the same arrangements that rely on the abjection of blackness. In Christian theological circles, this looks like theologians privileging inter-racial reconciliation over Black liberation, a maneuver that the late Black theologian James Cone indicted five decades ago. In 2009, this will to redemption found an outlet in Barack Obama’s inauguration as the first black president and the accompanying promise of a post-racial America that Obama’s ascendancy signified for many. More generally, this logic of redemption perpetually disciplines Black people in the US context to treat Black suffering and struggle as a prelude to the recuperation of democracy, the sanctity of America, US exceptionalism, etc. Thus, Black thinkers and activists are valorized when their ideas can fortify these projects, when their ideas can be used to convert Black anguish into a celebration of an order that demands this anguish. Against this redemptive urge, Wilderson writes, “Redemption is the narrative inheritance of Humans. There is no denouement to social death.”

And yet Wilderson makes an implicit distinction between denouement and abolition. If the former connotes a resolution at the end of the drama, a harmonious conclusion, then the latter points to the elimination or destruction of something. One approach seeks reconciliation by alleviating tension while the other approach heightens the tension to the point of dissolution. Wilderson acknowledges that social death is “constructed by violence and imagination…[and] thus like class and gender, which are also constructs, social death can be destroyed.” While Wilderson does not give a blueprint for how the destruction of anti-blackness should take place, we know that it will involve the difficult embrace of tensions and contradictions (like advocating for police reform while using demands for reform as an opportunity to think a world without police). In light of the recent protests and uprisings against State violence in the US and around the world, assemblies largely inspired by the antagonisms between policing and blackness, gatherings that are calling for the abolition of policing as we know it, Afropessimism will continue to be relevant and unsettling.

Joseph Winters is the Alexander F. Hehmeyer Associate Professor of Religious Studies and African and African American Studies. He also holds secondary positions in English and Gender, Sexuality, and Feminist Studies. He is the author of 'Hope Draped in Black: Race, Melancholy, and the Agony of Progress' (Duke University Press, 2016). Follow him on Twitter @JRWinters77.