loading...
By Yesenia Barragan August 23, 2016 Comments Off on A Country of Their Own: An American Ex-Slave’s Search for Homeland in Panama

While wandering through the maze of microfilm one afternoon at the Archivo General de la Nación in Bogotá, Colombia, I came across a curious archival document: a carefully worded petition from early 1849 written by a man named Guillermo Caution in the port town of Chagres, Panama (then part of New Granada, or what later became Colombia), one of the most dreaded destinations for exiled prisoners in the nineteenth century–a kind of Colombian Siberia.

That an otherwise unknown man sent a petition to the Colombian Congress was no surprise; hundreds if not thousands of everyday people, from enslaved women to indigenous farmers, regularly appealed to republican authorities in official missives, thereby staking a claim to the nation. But what was surprising was that Guillermo Caution (or, better yet, William Caution) was not a native Colombian, but rather a “citizen of the United States, of color” who was requesting “public lands [tierras baldías] with the objective of founding a colony of free black emigrants [negros manumisos emigrados] from the United States.”1

There is no doubt that William Caution was seeking a new, better life in Panama. We can see fragments of the life he left behind in his petition, where he stated that had “resided previously in different parts of the United States” and that “he obtained his freedom by self-purchase,” a reference to his formerly enslaved status. Although we do not know how old Caution was when he filed the petition in 1849, we do know that he lived through the heyday of the interstate slave trade of the antebellum U.S. South from the 1820s to the 1840s. Perhaps this life of captivity is what Caution meant by having resided “in different parts of the United States,” ripped apart from loved ones with every move, though his words remain elusive.

And his last name: Caution? Perhaps he had been held in bondage by the slaveholding Cotton estate of Amite, Mississippi or the Cauthens of Lancaster, South Carolina, having Francophied his name to Caution after collecting his freedom papers.2 Or maybe it marked his attempt to reconnect with his distant relatives, the Cautions, a free black family that had roots in Baltimore, Maryland by the 1850s.3 The truth escapes us.

Whatever the case may have been, that William Caution set his sights on a new life in Chagres was not by chance. With news of gold in California beginning in 1848, the small Panamanian outpost of Chagres actually transformed into one of the unforeseen sites of the California Gold Rush as miners searched for the speediest and safest route to the West. In the late 1840s and early 1850s, steamers carrying American and European mining prospectors sailed monthly out of New York to Chagres, where mules transported passengers overland to Panama Bay on the Pacific side and sailed up north eventually to San Francisco. 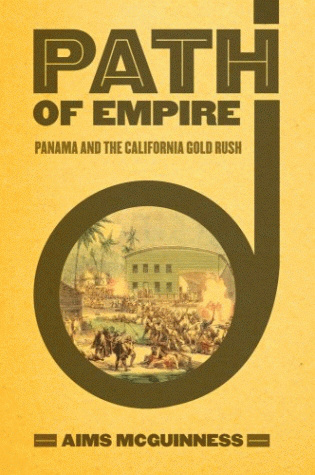 As historian Aims McGuinness writes in Paths of Empire: Panama and the California Gold Rush, the Isthmus of Panama was “remade into one of the principal conduits for the great maritime migration to the goldfields of California.” Stories of gold circulated not just in major American newspapers, but also in the independent black press like the Boston-based abolitionist The Liberator, which published a letter in 1850 from thirty-seven black miners in San Francisco inviting their brethren to join their newly formed mutual-aid society.4

William Caution could have learned about the gold rush early on and quickly boarded a ship to Chagres, which one American visitor described as a tropical “strange, fantastic, and oddish-looking town, situated in a deep, dark hallow or cove” whose mixed-race (African, indigenous, and Spanish) inhabitants were “so often blended, that it is difficult to say to which race they chiefly owe their origin” in 1849, the same year as Caution’s petition.5 Caution was also becoming one of many black American entrepreneurs in Panama, like William G. Hance who arrived in 1849 and opened up the “New Orleans” Hotel. Perhaps it was this relatively racially “congenial environment”and a growing community of fellow black Americans that prompted Caution’s desire that Colombia “be the adoptive country of thousands of his race that today find themselves without a country that they can consider their own.”6

Caution must have been highly aware (or at least knew someone who was highly aware) of domestic Colombian politics. By the late 1840s, Colombia was in the middle of nothing short of a political revolution. In March 1849, the newly created Liberal Party emerged victorious in the presidential elections, mobilized by the activism of the Democratic Societies, which included Afro-Colombians among their rank and file, especially in southwestern Colombia.

A strong wave of abolitionist sentiment captivated Colombia by 1849, eventually prompting the newly elected Liberal President José Hilario López to abolish chattel slavery forever in 1852. At the opening of this new era in Colombian history, Caution likewise utilized language that would attract Colombian authorities who made constant appeals to foreigners–typically Northern European and white American–knowledgeable in agriculture and mechanics to productively colonize the peripheries of the new Colombian nation. Perhaps bearing in mind this strategy, or reflecting his own worldview, Caution assured the Colombian Congress that the colonists he had assembled were “all persons accustomed to work and thus hardworking and industrious who have knowledge of the mechanical arts and are accustomed to farming land: they are supporters of peace and good order and are enemies of conflict and anarchy.”

Believing the Colombian constitution to be “the most just and liberal that exists anywhere in the world,” Caution was also tapping into what historian James E. Sanders calls a countervision of “American republican modernity” in The Vanguard of the Atlantic World: Creating Modernity, Nation, and Democracy in Nineteenth-Century Latin America, which placed Latin America at the center of republicanism, democracy, and rights from the 1840s until the 1870s.

We do not know what eventually came of Caution’s petition, or even Caution himself. Maybe he decided to take his chances in the transport business instead. One American traveler described hiring a mysteriously named African American “Captain William” to sail him down the Chagres River in 1851.7 A City Directory from Stockton, California in 1893, more than forty years after Caution’s petition, curiously lists a “William Caution, miner,” perhaps Caution’s son or grandson who tried his luck at mining.8 Perhaps he decided to board the ship to San Francisco and complete his father’s (or grandfather’s) dreams of California gold, leaving behind a country his ancestors hoped to call their own.

Yesenia Barragan is a historian of race, slavery, and emancipation in Colombia, Afro-Latin America, and the Atlantic/Pacific worlds. She received a Ph.D. in Latin American and Caribbean History from Columbia University. She is currently a Postdoctoral Fellow in the Society of Fellows at Dartmouth College. Follow her on Twitter @Y__Barragan.