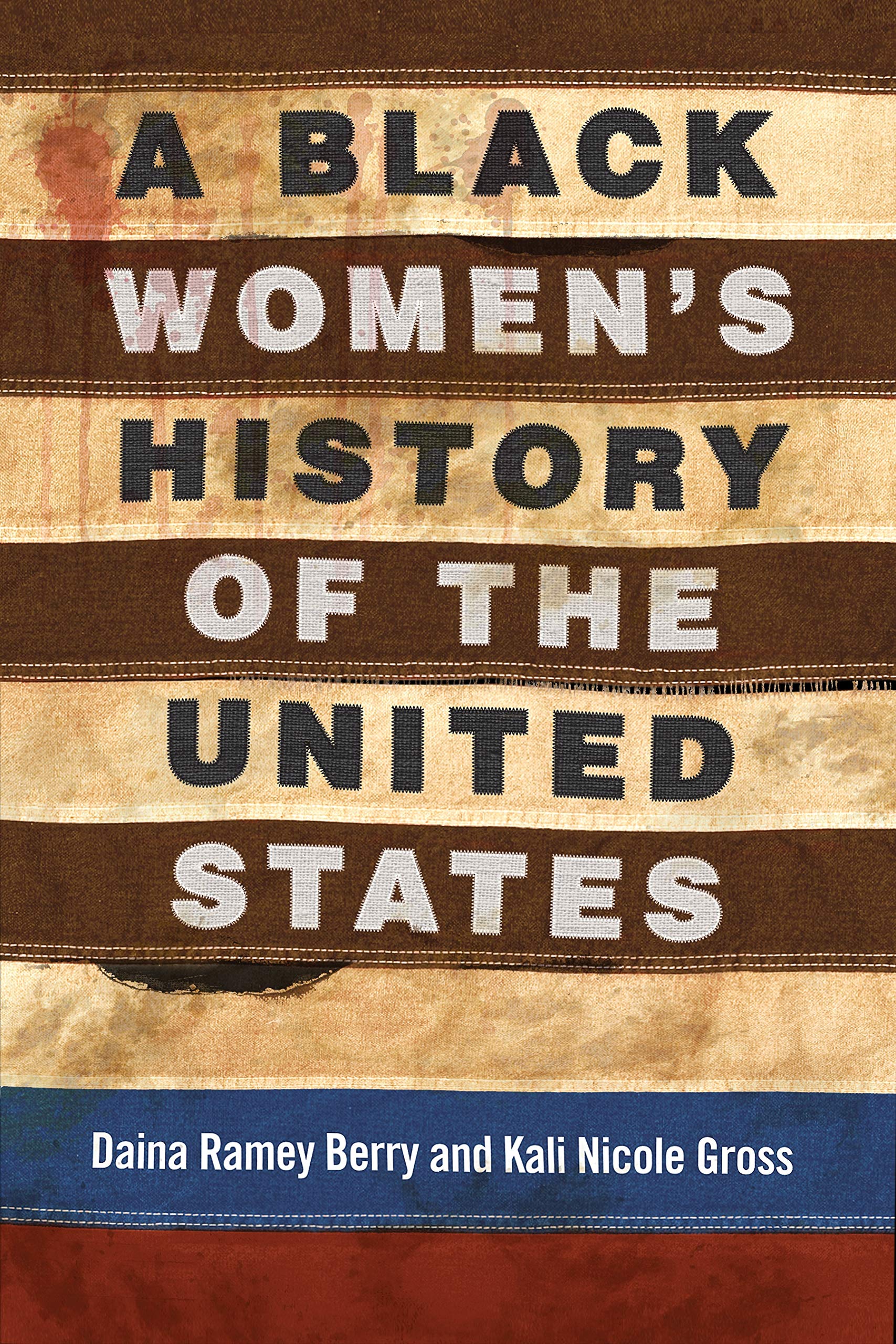 Kali Nicole Gross is the Martin Luther King, Jr. Professor of History at Rutgers University–New Brunswick. She is also the National Publications Director for the Association of Black Women Historians (ABWH), 2019-2021, and a Distinguished Lecturer for the Organization of American Historians (OAH). Her primary research explores Black women’s experiences in the U.S. criminal justice system and her expertise and opinion pieces have been featured in press outlets such as Vanity Fair, TIME, The Root, BBC News, Ebony, HuffPo, Warscapes, The Washington Post, and Jet. She has appeared on venues such as ABC, C-Span, NBC, and NPR. Her award-winning books include, Colored Amazons: Crime, Violence and Black Women in the City of Brotherly Love, 1880-1910, winner of the 2006 Leticia Woods Brown Memorial Book Prize, and, Hannah Mary Tabbs and the Disembodied Torso: A Tale of Race, Sex, and Violence in America, winner of the 2017 Hurston/Wright Legacy Award for Nonfiction.

Daina Ramey Berry is the Oliver H. Radkey Regents Professor of History, a Fellow of Walter Prescott Webb Chair in History and the George W. Littlefield Professorship in American History at the University of Texas at Austin. She is also the Associate Dean of The Graduate School, and incoming Chairperson of the History Department. She is “a scholar of the enslaved” and a specialist on gender and slavery as well as Black women’s history. Dr. Berry has appeared on several syndicated radio and television networks including: MSNBBC, NBC; TLC; CNN; C-SPAN; National Geographic Explorer and NPR. In 2016, she served as a historical consultant and technical advisor for the remake of ROOTS by Alex Haley (HISTORY/ A+E). Dr. Berry has received prestigious fellowships for her research from the National Endowment for the Humanities; the American Council of Learned Societies; the American Association of University Women and the Ford Foundation. She is a Distinguished Lecturer for the Organization of American Historians and her work has been, featured in the New York Times, Time, Newsweek, U.S. News & World Report, The Washington Post, and Huffington Post. Berry is the award-winning author and editor of six books and several scholarly articles. One of her recent books, The Price for their Pound of Flesh: The Value of the Enslaved, from Womb to the Grave, in the Building of a Nation (Beacon Press, 2017) received three book awards including the Phyllis Wheatley Award for Scholarly Research from the Sons and Daughters of the US Middle Passage; the 2018 Best Book Prize from the Society for the History of the Early American Republic (SHEAR); and the 2018 Hamilton Book Prize from the University Coop for the best book among UT Austin faculty.

J.T. Roane: What does centering all manner of Black women’s voices, from the enslaved and activists and organizers to outlaws do to rewrite the historiography of US and African American history?

Kali Gross & Daina Ramey Berry: Centering Black women’s voices, especially using a wide cross-section of figures, expands the historiography. It’s really that simple and at the same time that essential. Much of what many know of African American and US history is based on the same exclusionary notions of race, sex, gender, and class that have oppressed our people, and masses of people of color, throughout history and the historiography. It also helps bring otherwise-marginalized experiences into high relief—as we examine women who were differently abled and we look at Black queer women.

By providing a more complete examination, we hope to demonstrate the centrality of Black women and Black girls—from their legal suits demanding justice to their labor literally contributing to the making of the fledgling nation’s early flag to their protests leading to changes that reshaped the country. Black women have been here fighting for justice, freedom, and democracy, in its truest sense, since before 1619 and long after.

At the same time, in allowing Black women’s histories to drive the narrative, we also aimed to affirm and celebrate Black womanhood in all its fraught complexities. In other words, we did not want to have a purely celebratory or romantic exploration; we believe it is vital to have a balanced history that can accommodate Black women who won medals and Black women who went to the electric chair. Also, we wanted to talk about Black women as sexual beings in addition to documenting how they have been historically victimized.

When we do this, not only do we revise an exclusionary and harmful notion of our national history but we also continue to create a space for Black women’s humanity.

Roane: Tell our readers more about your collaboration. How did you come to this project and what was the experience like of writing together?

Gross & Berry: We had been having conversations off and on about the need for a newer survey of Black women’s history, so it was really fortuitous when Beacon Press approached us about writing a book for their series, ReVisioning American History. At the time, we were both at the University of Texas at Austin, and everything just seemed to align.

We started drafting within our respective areas of expertise but frequently read, critiqued, and revised each other’s work. We amassed materials for each other and also benefited greatly from research assistance from graduate students. But this book was also very much about building upon and featuring the work of our sister scholars. We learned so much by reading all of the new and dynamic work done in Black women’s history, much of it penned by Black women historians. We knew that this book was bigger than the two of us. Our writing process relied heavily on the brilliant insights of those scholars. And we aren’t just rehashing platitudes.

We held a manuscript workshop at Rutgers University in March 2019. Ten scholars of Black women’s history, from all different regions, areas of expertise, and across scholarly ranks—read early drafts and for a day we talked it through, just really did a deep dive into the work. It was a truly transformational moment, for both of us as scholars, but, most importantly, for the book. That’s when the manuscript really started coming together. And even after that, we had scholars from across African American and Black Women’s History read sections—pioneers in the field as well as more junior researchers. We wanted all kinds of eyes on the text.

Those experiences, together with our own processing sessions, really helped bring the project to completion. It was also helpful because throughout the writing of this book, we both lost a parent. Daina’s father transitioned in June 2017 and Kali’s mother passed away in December 2017. This was a hard period, but those losses changed how we looked at the women’s lives and losses. It also renewed our commitment to telling their stories in meaningful ways.

Even as we tried to include a lot of historical facts and data, if you will, you’ll notice that we also took pains to tell intensely personal stories—as much as the historical records would allow. We wanted to talk about Nannie, Isabel, Mary, Frances, and Alice in ways that honored their historical contributions and their lives. This, too, involved struggle because we thought long and hard about who to feature in opening vignettes and why. We also felt crushed when we couldn’t include every figure or when we didn’t have all of the information we wanted.

Roane: We sit at a critical juncture in the trajectory of Black women’s history. We have lost some of the critical thinkers and organizers who insured the institutionalization of the field like Rosalyn Terborg-Penn. Yet there are so many early career scholars and graduate students whose work shows that this vein of inquiry will continue to yield a generative and transformative historiography. Your book attests to this and is a critical part of this. What are your hopes for the future of Black women’s history?

Gross & Berry: Wow, great question. We hope that it will continue to thrive—so many scholars are producing incredible research on all kinds of Black women within the United States and throughout the African Diaspora. We hope scholars will continue to push the envelope and keep resurrecting and telling our stories. At the same time, we also hope that as Black women’s history continues to grow, its founders and pioneering scholars receive the proper acknowledgement for all of their groundbreaking work and contributions.

We dedicate this interview to Dr. Jacqueline A. Rouse, a pioneering scholar of Black women’s history.