loading...
By Leah Kaplan April 12, 2019 Comments Off on A Billion Black Anthropocenes or None: A New Book About Race and Geology

This post is part of our blog series that announces the publication of selected new books in African American History and African Diaspora Studies. A Billion Black Anthropocenes or None was recently published by the University of Minnesota Press.

The author of A Billion Black Anthropocenes or None is Kathryn Yusoff, Professor of Inhuman Geography at Queen Mary University of London. She works on questions of subjectivity and materiality in the context of a dynamic earth, and is informed by Black feminist theory, material histories, and aesthetics. Her work addresses the raciality of matter in geologic grammars. Her current research addresses questions of ‘Geologic Life’ within the proposed geologic epoch of the Anthropocene. This research examines how inhuman and nonorganic dimensions of life have consequences for how we understand issues of fossil fuels, human-earth relations and materiality in the politics of life. Kathryn’s work draws on insights from contemporary feminist philosophy, critical human geography and the earth sciences. She is particularly interested in the opportunities the Anthropocene presents for rethinking the interactions between the earth sciences and human geography in the “geo-social formations” of Anthropogenic change. She is completing a companion book on Geologic Life about the politics of nonlife and geologies of race. Follow her on Twitter @k_yusoff. 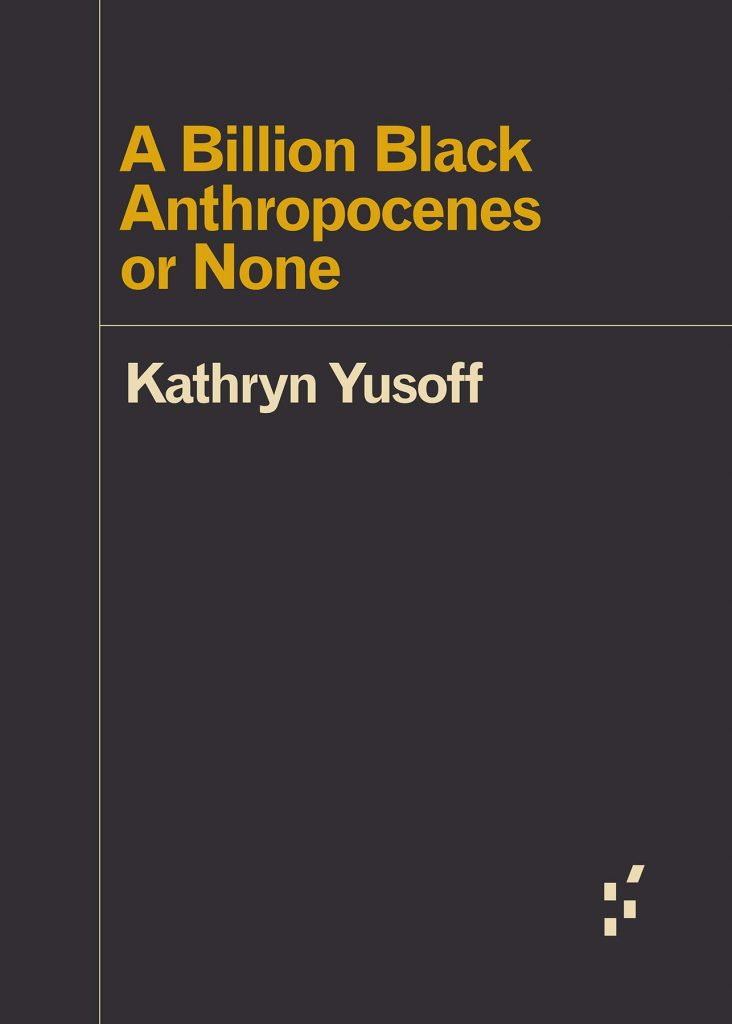 No geology is neutral, writes Kathryn Yusoff. Tracing the color line of the Anthropocene, A Billion Black Anthropocenes or None examines how the grammar of geology is foundational to establishing the extractive economies of subjective life and the earth under colonialism and slavery. Yusoff initiates a transdisciplinary conversation between black feminist theory, geography, and the earth sciences, addressing the politics of the Anthropocene within the context of race, materiality, deep time, and the afterlives of geology.

“Bringing forward the continental rupture in this way allows for a historically grounded and embodied understanding of geological transformation.” —Antipode

Leah Kaplan: How does this book contend with anti-Black racism and Anthropocene politics? Why is it important to discuss race within the field of Anthropocene studies?

Kathryn Yusoff: A Billion Black Anthropocenes or None situates anti-blackness in its material histories. Specifically, how the geologies of race were constructed through different colonial moments from 1492 in the epistemic orders of geology. It is a conversation, or bridge (I hope!) between two disciplines that are usually kept somewhat separate, via Black feminist theory. In taking on the Anthropocene as a universalizing concept and as a name given to an epochal environmental rift, I wanted to show how the classification and ordering of matter has an anti-Black and brown history. On the one hand, this meant engaging with the history and logics of geology as both a theory of the earth and its subjects, and on the other, geology as a code for extraction and moving materials around the world. Geology becomes world-making, materially and subjectively. It breaks a lot of worlds. Blackness is made in that extractive code and placed in a hierarchical order of strata. Through the emplacement of Blackness in paleontological orders, Black and indigenous subjectivity is consigned to deep time rather than the political present. Geography is stolen through temporal displacement.

While the scientific racism of biology and biologisms have had attention, these ideas are subtended by a theory of geology or nonlife. There is a sense in which geology is somehow understood to be an ahistorical epistemology of inorganic matter, which only becomes political in its utility or at the site of extraction. I wanted to show how the grammars of geology establish an extractive praxis that was, from the get-go, entangled in a violent mattering of Black and brown bodies. Geology, as desire, survey, classification, and extraction established the grounds of Indigenous geographic alienation from land and the extraction of personhood under slavery and its afterlives, such as convict lease labor in mines and steel mills. By engaging the imperial origins of geology, I wanted to tell other stories that countered the search for the “golden spike” of the Anthropocene and point to the many erasures of colonial world-making that delivered this environmental crisis. I also wanted to experiment with what another geophysics or an insurgent geology, that which was given to Blackness in location in an inhuman categorization, might be able to do.

Given the hidden white liberal subject that frames environmental thought and science policy on climate change that is not interested in the previous genocides that its world was built on, I was trying to write against this amnesia of white geology. In seeking to de-sediment the social life of geology, it becomes apparent that racial violence is the violence of matter. It is a violence of impacts crafted in anti-Black epistemes. Following Césaire, in the final chapter on Insurgent Geologies, I try and put the literatures of the Anthropocene or, white Geology, in contact with Black literatures (Sylvia Wynter and Dionne Brand) to force a different mode of historical accounting that has a geophysics to counter anti-blackness. Another way to say this is to ask, what kind of geophysics counters the metaphysics of anti-blackness?