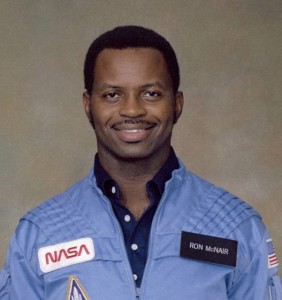 January 28, 2016 will mark the thirtieth anniversary of the Challenger shuttle disaster.  It’s hard to believe that the fateful morning at the Kennedy Space Center, a morning which changed the nation, was thirty years ago. Dr. Ronald McNair,  a physicist and one of the first African Americans in space, was a member of the Challenger crew. I only recently came to appreciate the legacy of Dr. McNair.  I was five years old at the time, and the most I remember is my parents informing me that my cousins had lost their father.  McNair was my cousin by marriage.  In middle school, I read about him and the accident, but it was only recently that I began to look at him through a historian’s lens.

McNair was born in Lake City, South Carolina on October 21, 1950.  He grew up in the segregated South.  When he was about 8 or 9 years old, he was confronted with the peculiarities of segregation when he ventured to the local library to check out some books.  The story is best recounted by his brother Carl in a StoryCorps interview:

In 1978, McNair along with 34 others were selected from a pool of 8,079 applicants as candidates for the space program.  In the 1960s as the country entered the space race, NASA’s astronaut program was decidedly white and male.  Presumably influenced by the Civil Rights Movement, NASA’s push for diversity among its astronauts coincided with its transition from the Apollo spacecraft to the Shuttle spacecraft.  The Shuttle was intended to serve as a permanent link between Earth and space by being capable to facilitate launching and landing within one vessel.  NASA’s recruitment efforts were enhanced by the use of Stak Trek actress Nichelle Nichols, better known as Lt. Uhura.  The 1978 shuttle program candidate class included 6 women–among them was Sally Ride, the first woman in space, 3 African Americans, and one Asian American.  McNair, along with Guion Bluford, Jr., and Frederick Gregory entered the program knowing that when they finished one of them would be the first African American in outer space.  The honor would ultimately go to Guion Bluford, Jr. when he flew his first mission in 1983.

I came to personally appreciate McNair’s perseverance during a dark time in graduate school.  When I was writing my dissertation, my hard drive crashed.  I did have hard copies of my drafts and some back-up files, but at that particular moment, I could only feel grief at the loss of months of hard work.  I felt completely bereft, and was beginning to enter what might have been an emotional break down when my mother told me the story of my cousin Ron the physicist.  When he was working on his dissertation, two years of his data and his entire dissertation research was stolen. Keep in mind that this is pre–computers 1976, so the theft of anything related to a dissertation was devastating.  At that particular moment, McNair had two choices: give up or re-do his experiments. McNair would start his experiments over, and successfully complete his dissertation.  When I heard this story, I immediately went back to the drawing board.  My immediate thought was, at least I have computers; however, I quickly realized that his achievements were the product of hard work rather than happenstance.

Today, there are numerous scholars and scientists following the legacy of Dr. Ronald E. McNair.  One of the federal TRIO programs bears McNair’s name–the Ronald E. McNair Post Baccalaureate Achievement Program.  The program is funded by the Department of Education in 151 institutions in the United States and Puerto Rico.  It prepares undergraduates for doctoral programs.  I know many scholars and professors who were McNair program graduates and owe their success to their training in the program.  His widow, Cheryl McNair and his children, Reggie and Joy, have created their own organization, The D. R. E. M. E. Foundation, which promotes STEM disciplines among school children.  Together, these two organizations are insuring that next group of groundbreaking scholars have the opportunity, fortitude, and tools to impact society.

We may never know what type of scientist or public intellectual Ronald McNair would have been.  But, the success of his namesake programs and the few available speeches indicate that he would have been an inspiring one.

Comments on “30 Years Later: Reflections on the Life and Legacy of Dr. Ronald McNair”