During his groundbreaking visit to Havana last month, President Barack Obama suggested that the embrace of U.S.-style democracy and capitalism would “help lift up” Cubans of African descent. Following the speech, former Cuban President Fidel Castro reminded Obama that the Cuban Revolution had already eliminated racial discrimination in the 1960s.

The contemporary state of racial inequality casts doubt on both men’s assertions: black and brown North-American youth still face police brutality (murder), voter suppression, and low graduation rates, while Afro-Cubans have less access to the emerging tourist sector than ever before. “Democracy” or “socialism”—despite the propaganda and good intentions of our leaders—does not naturally uplift people of African descent.

As a historian who studi 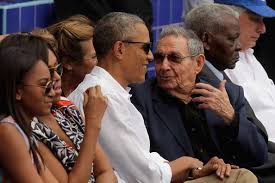 es racial ideology and political rhetoric during the Cuban Revolution, I was excited by Obama’s three-day visit. At no point during the past thirteen years of traveling to the island did I expect to see a U.S. president in Havana. Media coverage of our first Black president making his way through the streets of Old Havana, speaking to a room full of Cuban leaders, and joking with President Raúl Castro at a baseball game confirmed my belief that Cubans and Americans have many things in common. However, until recently, U.S. and Cuban policy made it hard, if not impossible, to imagine the restoration of diplomatic relations that has occurred between December 2014 and Obama’s March 2016 trip.

The symbolism of a black U.S. president eating at one of Havana’s few black-owned restaurants and talking about Afro-Cuban access to the new economy should be celebrated. Missed, though, was the opportunity to reestablish coalitions and activism between people of African descent in both countries. Instead, debates about which country had been most successful in battling racism abounded. Similar to previous interactions between Cuba and the United States, this event showed how both countries invoke celebratory histories that reinforce national racial mythologies, rather than the controversial present.

During his speech in Havana’s Gran Teatro, President Obama momentarily departed from the rhetoric of U.S. exceptionalism to acknowledge our shared history of racial oppression. “Cuba, like the United States, was built in part by slaves brought here from Africa” and that “we both have more work to do to promote equality in our own countries [and] to reduce discrimination based on race,” Obama said. Because U.S. diplomats rarely publicize aspects of the country’s continued racial inequity, this part of Obama’s speech was refreshing and a humbling gesture to his Cuban hosts.

Still, Obama used personal anecdotes and his election to reproduce the narrative (read: myth) of the American Dream:

“In 1959, the year that my father moved to America, it was illegal for him to marry my mother, who was white, in many American states. When I first started school, we were still struggling to desegregate schools across the American South. But people organized; they protested; they debated these issues; they challenged government officials. And because of those protests, and because of those debates, and because of popular mobilization, I’m able to stand here today as an African-American and as President of the United States. That was because of the freedoms that were afforded in the United States that we were able to bring about change.”

It is true that Obama is the product of the successes of past struggles against racism in the United States, but that is not the whole story. International news coverage of the President’s Cuba visit was interrupted by reports of yet another unarmed Black man being gunned down by police in Raleigh, North Carolina. The optics of Akiel Denkins lying lifeless on the streets highlights the many ways “democracy” and unchecked “capitalism” can also be part of the American nightmare for people of African descent.

A few days after the Obamas left Havana, Fidel Castro responded to the U.S. president’s words by emphasizing Cuba’s own progress in achieving racial equality. Castro invoked Cuba’s previous antiracist victories and criticized Obama for failing to acknowledge that the Cuban revolution had eliminated racial discrimination in the 1960s and helped liberate Angola in the 1970s.

“Nor does he [Obama] say that the Revolution swept away racial discrimination . . . The hateful, racist bourgeois custom of hiring strongmen to expel Black citizens from recreational centers was swept away by the Cuban Revolution – that which would go down in history for the battle against apartheid that liberated Angola . . . This was not the objective of our solidarity, but rather to help the peoples of Angola, Mozambique, Guinea Bissau and others under the fascist colonial domination of Portugal.”

As I discuss in my new book, Antiracism in Cuba: The Unfinished Revolution, Cuba’s unprecedented national integration campaign, global antiracism, and support in Angola dramatically changed the life outcomes of people of African descent both on the island and around the world. 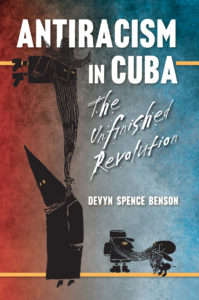 But much like Obama’s remarks, Castro’s celebratory story of antiracism disguises some of the less than perfect continuities between pre- and post-revolutionary Cuba. Continued prejudicial attitudes toward black and mulato Cubans, racist jokes, political cartoons using colonial images for black caricatures, and Cuba’s decision not to talk publicly about domestic racism after 1961 allowed racism to continue on the island in subtle ways. These contradictions have become more visible since the 1990s as black and mulato residents struggle to find jobs in Cuba’s new, rapidly privatized economy. 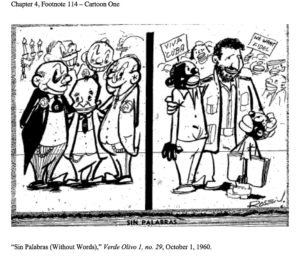 After Obama left Havana, a battled ensued as Cubans debated what meaning to give the U.S. president’s words of friendship.

Some Cuban hardliners, including Afro-Cuban journalist Elias Argudín, critiqued the POTUS’s visit. Argudín published an article in the Tribuna de La Habana titled “Negro, ¿tú eres sueco?” Literally translated, this phrase means, “Black man, are you Swedish?” Many Cubans of color, however, read this title as an insult to the U.S. president because of its reference to a 1980’s film. In the film, an Afro-Cuban tries to use a Swedish passport to access a “dollar store” where much needed imported goods like soap, clothing, and oil were sold only to foreigners. Because Cubans were banned from these stores, the shop-keeper looked at the passport, then back to the black Cuban, and incredulously asks, “Black man, are you pretending to be Swedish”—a phrase that came to be understood in Cuban vernacular to mean “Black man, are you playing dumb?” 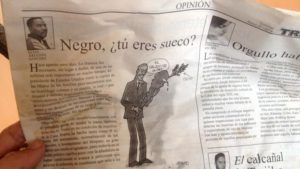 Afro-Cuban intellectuals and activists responded quickly to this attack against Obama’s intelligence. Many women, in particular, wrote articles for Sandra Alvarez’s black feminist blog, Negra Cubana tenía que ser (Black Woman, I had to Be) analyzing how the incident uncovered Cuban attitudes toward blackness.

For example, Giselle Arandia described in “Obama’s visit stirred up racism” how in addition to being a rude insult to a visiting head of state, “the [Tribunal] article did everyone a favor by showing without a doubt the racism that exists in Cuba even though no one wants to talk about it.” And, Yesenia Fernández Selier’s essay about Obama in Cuba linked the sketch in the initial article (above) to other racist cartoons about the U.S. president and the ways Afro-Cubans are represented by the Cuban press. These responses to the racist insults launched against Obama undermine revolutionary leaders celebratory post-racial language, in the same way that the Black Lives Matter movement demands that U.S. political leaders face up to the realities of continued violence against blacks in the United States.

In the end, Obama’s visit to Havana showed how leaders in both the U.S. and Cuba use celebratory post-racial myths about their nations’ pasts to make policy in the present. We also learned how some critics of restored U.S.-Cuban relations use explicitly racialized language and imagery to undercut the enthusiasm Cubans felt for the U.S. president.

Most importantly, this moment reveals the legacy and vitality of Afro-Cuban activism. Since the 1960s, black Cubans have been some of the biggest supporters of the Cuban revolution, but they have also always demanded that the revolution live up to its promises of social and racial equality. As we wait to see what the fall-out will be of Obama’s trip to Cuba, it appears that for Afro-Cubans and African Americans the struggle for dignity and against racism continues.

Comments on “What Obama’s Trip to Havana Revealed about Race in Cuba and the U.S.”