Recently the AAIHS held a workshop at the University of Pennsylvania where the contributors to its forthcoming anthology, New Perspectives on the Black Intellectual Tradition, gathered to exchange chapters. The first panel featured AAIHS founder and president Christopher Cameron, Virginia Commonwealth University professor David Weinfeld, and the legendary scholar of black religion Anthea Butler. In a wide-ranging conversation on black free thought, secularism, and religion, one of the most shocking revelations for many was that Alain Locke—viewed by many as the founder of the Harlem Renaissance—was deeply influenced by his belief in the Bahá’í Faith, a worldwide religion known for its anti-racism, ecumenicalism, and advocacy for world peace and social justice.

While readers will have to wait for the anthology’s publication to read Professor Weinfeld’s findings in full, I wanted to share a related story derived from a chapter I recently published in an anthology entitled Abdu’l-Baha’s Journey West: The Course of Human Solidarity, edited by Negar Mottahedeh of Duke University. It follows a similar track in tracing the Bahá’í Faith through the mind of another groundbreaking black intellectual—W.E.B. Du Bois. 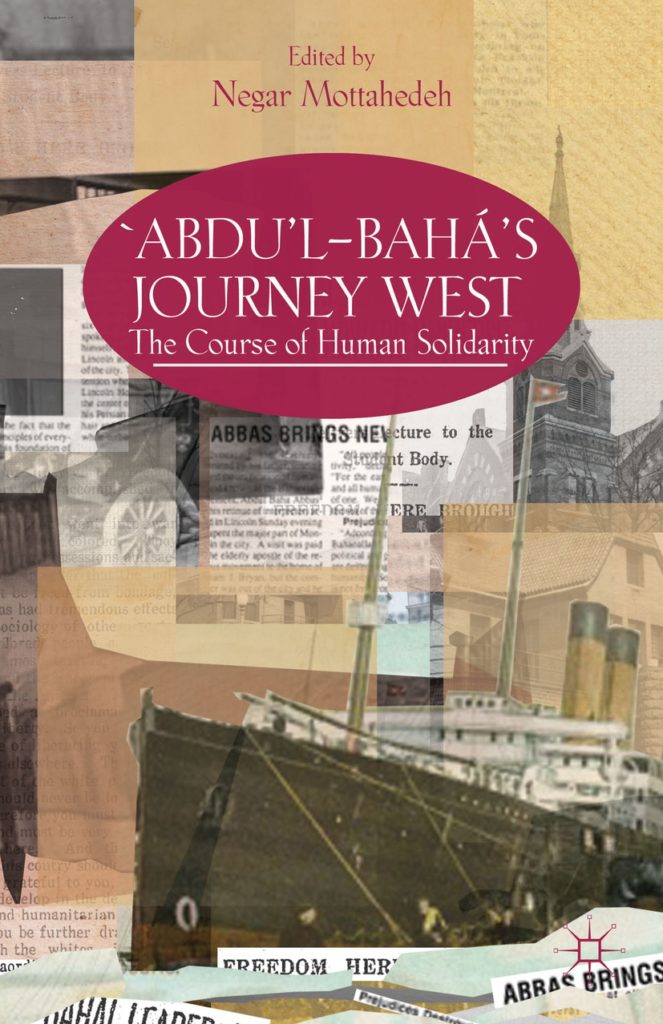 In 1912, Du Bois met Abdu’l Baha, the son of Baha’u’llah, the founder of the Bahá’í Faith, when Abdu’l Baha came to the United States. During his visit, he made a special appeal to African Americans, speaking before the A.M.E. Church’s Bethel Literary Society and at Howard University. But it was Abdu’l Baha’s speech at the fourth N.A.A.C.P. conference that left a lasting impression on Du Bois. He remembered this meeting for the rest of his life, writing to a Bahá’í friend in 1942, “I met personally Abdul Bahai [sic] when he was in America,” Du Bois recounted. “I had great respect for him and for his movement.”1

In 1912, Du Bois published Abdu’l Baha’s entire speech from the N.A.A.C.P. conference in the June edition of The Crisis and featured another article and disproportional large picture of him the following month in his “Men of the Month” section. When Abdu’l Baha passed away in 1921, Du Bois wrote in The Crisis, “[t]wo men sit high before the world today—Eugene Debs and Abdul Baha.”

This proved much more than a fleeting encounter. Du Bois’s N.A.A.C.P. remained institutionally linked to the Bahá’í Faith for the remainder of his life. In addition to membership lists that overlapped significantly (especially in Washington, D.C.) the two organizations collaborated over several decades on racial justice issues. For example, in 1932 Du Bois and Walter White both spoke at a banquet that the Bahá’ís put on to honor the N.A.A.C.P. where White reportedly said “the Bahá’í movement” was “one of the great forces of human understanding.”

This relationship further deepened while becoming more personal when Du Bois’s first wife Nina officially enrolled in the Bahá’í Faith in 1936. While I argue in the larger piece that the notion of a bona fide “membership” was extremely hazy for Bahá’í communities until at least the 1960s, Nina does appear on various internal membership lists in the Bahá’í National Archives dating from the 1930s. She was certainly actively involved in Bahá’í community life, discussed internal Bahá’í affairs with her husband, and was part of a contingent of black women active in the Bahá’í Faith whom W.E.B. Du Bois described as “colored women of standing” who were all “attracted to the Bahá’í movement, and plan to join.”

Du Bois himself also became deeply involved in Bahá’í community life by keeping a small circle of black Bahá’í friends, speaking at Bahá’í schools, and attending Bahá’í events. According to long-time friend and active African American Bahá’í Louis Gregory, Du Bois lectured at Green Acre Bahá’í school sometime prior to 1937. Gregory also mentioned the “joyous” news that Nina had become a Bahá’í in his letter to the religion’s elected administrative body.2 As late as 1953 Du Bois was actually denied a passport by the U.S. government after applying to attend the Inter-Continental Conference of the Bahá’í Faith in New Delhi, India.

Du Bois’s intellectual development was also likely shaped by Bahá’í scripture and the Bahá’í newsletters he read. In his correspondence with his many white Bahá’í friends it is clear that Du Bois was well-versed on the inner workings of Bahá’í community life and its holy books. He was supplied a copy of the Advent of Divine Justice in 1951 and was apparently interested in how the 1948 text advocated for one of the earliest known programs of affirmative action as a means of advancing diversity.

Du Bois also kept current by reading The Bahá’í News and quoting Bahá’í scripture authoritatively to other Bahá’ís. Bahá’ís in their letters to him often referred to Du Bois as part of their Bahá’í “we.” They also sought his advice, with one Bahá’í saying “we are eager to have your advice of how can the Bahá’í message spread more rapidly among all peoples.” Du Bois felt further compelled to intercede within internal Bahá’í affairs. When a 1937 Bahá’í meeting of twenty people in Nashville appeared to draw the color line, Du Bois condemned it publicly in a op-ed while reluctantly stating privately that after that point “my interest in the Bahá’í movement is not as great as it was.” Yet by 1954, his interest may have been somewhat rekindled. He told a Bahá’í friend, “If I were going to join a religious organization I should certainly be strongly tempted to join the Bahá’í movement because of its broad principles, its international and inter-racial program.”

These associations caused at least one fellow African American to “accuse” Du Bois of in fact being a Bahá’í (which, again, was a very fluid identity in the first half of the twentieth century). Many people at the time involved with “the Bahá’í movement” envisioned a very low barrier to entry to the Bahá’í Faith. They understood themselves and those around them as almost automatically part of the “movement” if not the “religion” (two terms often used interchangeably by participants). In the middle of his communist organizing days Du Bois proved this point. Already something of an anomaly for refusing to endorse violence as a means of achieving a communist revolution, Du Bois’s comrade George Streator believed that he had mapped the intellectual origin of this pacifist streak in Du Bois’s thought. Clearly familiar with Du Bois’s Bahá’í sympathies, Streator told Du Bois in a private letter “you write like an apostle of Abdul Bahia [sic].”

So what should scholars make of this nearly fifty-year connection between W.E.B. Du Bois and the Bahá’í Faith? While the question of whether or not Du Bois was a Bahá’í on some nominal level (either by his own standards or in the minds of those around him) is an important one, it is also, as mentioned above, a bit anachronistic. Instead, the real payoff in studying African Americans in the Bahá’í Faith is that it demands a much deeper attention to what constitutes a “religion” to begin with. Does one have to accept every single tenet or dogma of a religion to at least be considered (or consider themselves) a nominal part of it (or its “movement”)? What about people who float between belief, non-belief, or a certain kind of pragmatic religiosity?

Questions such as these force us to recognize the fluidity of religious identities more broadly and how black thought specifically often blurs the lines between a congregation, a movement, a religion, politics, and philosophy. While these categories are often imagined as discrete taxonomies by some scholars today, black people a hundred years ago (and perhaps even today) seemed far less interested in such semantics. At the very least, they drew their lines differently.

Yet Locke and Du Bois were not alone. They were part of a much wider awareness (or perhaps even a social movement, according to one scholar) of the Bahá’í Faith among African Americans. Those who understood themselves unequivocally as believers included the Chicago Defender’s Robert Abbott, Broadway actress Dorothy Champ, and, later, jazz musician Dizzy Gillespie and Poet Laureate Robert Hayden. If nothing else, what is becoming abundantly clear is that the deep recovery project necessary to properly analyze this phenomenon of African Americans and the Bahá’í Faith remains to be done.

Guy Emerson Mount is currently a PhD Candidate at the University of Chicago and the Coordinator of the U.S. History Workshop. His dissertation, “The Last Reconstruction: Race, Nation, and Empire in the Black Pacific,” analyzes the legal end of American slavery alongside the birth of American overseas empire. Follow him on Twitter @GuyEmersonMount.

Comments on “W.E.B. Du Bois and the Bahá’í Faith”