*This post is part of our online roundtable on C. Riley Snorton’s Black on Both Sides. The author discusses the second chapter: ‘Trans Capable: Fungibility, Fugitivity, and the Matter of Being.’

Throughout Black on Both Sides: A Racial History of Trans Identity, C. Riley Snorton theorizes gender as a non-fixed, non-binary category that may be more fully understood relative to the historical experiences of Black life in America. Reading with theorist Sylvia Wynter, he offers his work as a “call to arms,” with its histories and theory introducing an “invention into existence” (7). “Trans,” he begins, “is more about a movement with no clear origin and no point of arrival” (2). As a descriptor for gender, he intends “trans” as both unfixed and fungible— “which is to say, revisable within blackness, as a condition of possibility” (59). In the introduction, he proposes an expansive characterization of “trans” unhinged from the normative categories of gender, sex, and species.  Instead, he centers the terms “transitive” (ever changing), “transitory” (impermanent), “transversal” (crossing, yet never linking) in relation to both Blackness and gender (9).

The term, “fungible/fungibility,” as critical scholars such as Saidiya Hartman, Frank Wilderson, Jared Sexton, Tiffany King and others have theorized, is used as a “conceptual frame” in the book to capture the violent expansiveness of the Black body in the New World. Hartman’s attention to “quotidian violence” in Scenes of Subjection, for example, both radically signaled attention to the omnipresent, ‘everyday violence’ in the lives of the Black enslaved, and also posed a heuristic that critical scholars and historians have since grappled with: “What can be done to a captive body?” Snorton’s proposal that fungibility offers something potentially transformative when the nexus of gender and race is studied forms an important theme throughout the book and is centered in Chapter 2. As a grand narrative for the conditions of the enslaved, or a “conceptual frame,” Snorton intends the term as a site of possibility, rather than one that alone encapsulates the “seared, divided, ripped-apartness” of the Black body.1 He asks what occurs when fugitivity and fungibility meet via the performance of gender. Specifically, what new possibilities for living a life on terms more of its own making may be witnessed? And how may fugitivity—whether expressed here as “cross dressing” in the nineteenth century or escaping a master’s grip — overlap, magnify, or supersede the other?

Chapter 2 offers a reading of fugitivity, both narrowly and expansively characterized, via the performance of gender, or in nineteenth century-discourse, through Snorton’s study of “cross dressing.” Throughout the chapter, Snorton explores ways that “the capacity for gender differentiation was lost in the outcome of the New World,” and as such, made gender a “critical modality of political and cultural maneuvering within figurations of blackness” (56). As its chapter title, “Trans Capable…” suggests, the performance of gender imagined possibilities for a kind of freedom for enslaved and free people in the antebellum period. “Cross dressing,” thus “engender[s] a way of seeing fungible flesh as a mode for fugitive action” (12). Divided into two primary parts, the first examines the lives of two “cross dressing” sex workers, Mary Jones and Mary Waters, who lived outside of the bonds of slavery in the northern United States. In the second part, he theorizes the relationship between fugitivity and fungibility, highlighting the complicated, transnational story of William and Ellen Craft who fled slavery in Georgia in 1848. 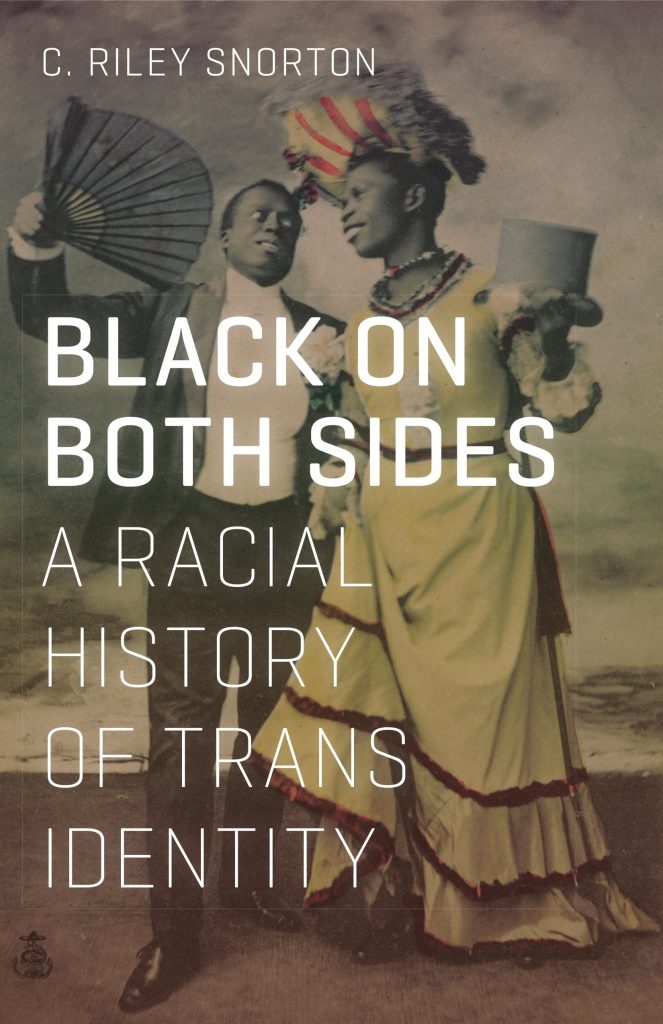 Importantly, Snorton’s work introduces his reader to the ways that “captive flesh figures a genealogy for modern (black) transness” (57). As a young scholar whose work is deeply influenced by archival study and history, as well as scholars whose work attends to questions of subjectivity more broadly, I experience this intention in his work as demanding, generative, and defiant. His work refuses discipline and also exemplifies “new modes and methods of research,” as Christina Sharpe has encouraged.2 While several historians and theorists, including Stephanie Camp, Thavolia Glymph, and Marisa Fuentes, have greatly broadened our understanding and envisaging of how enslaved women lived, Snorton’s work pushes his reader to think further, more widely, about the role of gender, transness, and its inextricable import within the lives of bondspeople in the 19th century. Specifically, he asks readers to think about transness — transitive, transitory, transversal — as a category for possibility, “something akin to freedom,” when read alongside the experience of Black life in the nineteenth century and beyond. For example, as he writes about the Crafts’ escape, contemplating the relevance of gender and race alongside their quest for freedom “highlights how matters of self determination and personal sovereignty were regarded as existential and ontological concerns” (76). How were gender and transness both created and experienced by those who lived in captivity? What can be better understood about Black life in the nineteenth century if one studies blackness and gender as “overlapping in referentiality?” (5). How is the study of these experiences integral to a historiography of Black translife in North America, still embryonic in stage, in the twentieth century?  What beauty and generative potential must the young field of trans studies gain with his study of transness as “revisable within Blackness, as a condition of possibility?” Arising out of Snorton’s work, these inquiries are persistent and radical.

At times, the chapter tends towards opaqueness and employs dense literary and academic jargon in ways that feel unproductive, or even inaccessible. On page sixty-five, for example, a discussion of “cross dressing” Mary Jones turns to food —namely, an astounding consumption of meat ingested by Jones as reported in a Virginia newspaper in 1908.  Discussing the act of consumption and its media reporting, Snorton writes that “Here, Jones, in the twilight of her life, attempted to resignify that epithet constituted by the flesh of what [Tavia] Nyong’o described as a ‘surrogate vagina’ into a ‘gastronomic record’ based on a no less spectacular form of consumption” (65). The next page-and-a-half devolves into a discussion about “gustatory practices and masturbatory gratification” with Jones’ mouth serving as a “double function.”  This narration feels out of context within the chapter. Regarding the use of wordy jargon, an example can be found when Snorton writes that “Ellen [Craft’s] proximal presence to the staging of black and white enslaved female forms highlighted how such a juxtaposition required the erasure of miscegenated figures; her appearance made a triptych of agitprops against contemporaneous visualities of race” (89). Relatedly, Snorton’s habit of frequent in-text references to other scholars presents itself as a dilemma, I believe, rather than a clear referent and tribute.  The scholarly genealogy of richly dense ideas and concepts undergirding his text are not always illuminated through his writing; rather, his ideas—as well as those he writes with—remain impassable at times. After a third read, however, I considered that the chapter perhaps intends its reader’s return: With each reread, pause, and return, I heard old texts speaking with and through his work and then, considered new possibilities within it. Still, after a few revisits, I pondered the work’s audience, as well as its translatability.

Lastly, a few questions linger with respect to Snorton’s analysis.  In the discussion of the “two Marys,” I wondered about the lives of other “cross dressers” of the period.  A short, historical summary of non-black “cross dressers” and/or sex workers similarly situated in the temporal period may have been useful. For example, how did these other lives and their arrests differ from the outcome of Jones, ultimately sentenced to five years of hard labor at Sing Sing Prison and reincarceration?  Was Jones’ life as a “cross dresser” made more or less inevitable or spectacular by its Blackness?  In light of the sources used to detail Jones’ life — stories detailed in the New York Herald, a lithograph, and secondary sources — how did Blackness and gender “overlap in referentiality” in ways unique to Jones’ life? In the case of Waters, is it possible that Blackness eclipsed the kind of fugitivity Snorton describes and alone signaled recapture under the Fugitive Slave Act, or is the illumination in the fact of Waters’ “cross dressing” and ability to live “something akin to freedom” before recapture?

Finally, I am left reflecting upon the significance of Snorton’s discussion of Harriet Jacobs’ statement— “there was something akin to freedom” —here used to suggest, broadly, that Black people were able to imagine “other qualities of life and being” when “marked by and for captivity” in the nineteenth century (59). What happens when Jacobs’ own narrative of fleeting agency, uttered in the context of her rape by her white slave owner, is detached from the specific conditions of domination and sexual violence in which she, herself, used them?  In other words, what happens when the analysis specifically decenters, as Hartman has written, “the sexual violation of the captive female, the negation of kinship, and the (dis)possession of the body” from its subject?3

Rachel Zellars is an assistant professor in the Department of Social Justice and Community Studies at Saint Mary’s University in Halifax, Nova Scotia. Her work focuses on the history of slavery in Canada, Black migration through the Maritimes and into the Atlantic world beginning in the 18th century, as well as gender violence and disability. She is also a co-founder of the ​Third Eye Collective. Follow her on Twitter @rachelzellars.​

Comments on “Transness As A Category For Possibility”