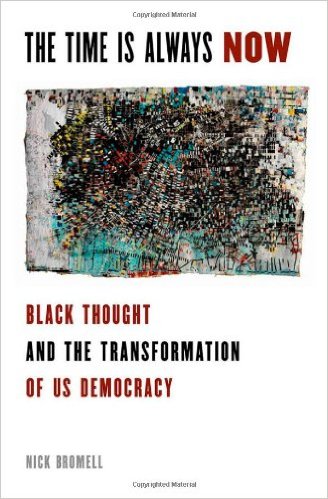 I recently read Nicholas Brommel, The Time is Always Now: Black Thought and the Transformation of US Democracy (Oxford, UK: Oxford University Press, 2013). Brommell begins by asking how and what has defined democracy in the United States. Brommell answers that despite varying definitions, scholars of democracy have tended to look to “predictable authorities” like “Madison, Hamilton, Tocqueville, Dewey, and more recent theorists like John Rawls and Sheldon Wolin.”1 Brommell’s book is part of a growing body of interdisciplinary work in American political thought, that combines history, political science, American studies, literary studies, feminist and gender studies, critical race theory, liberation theology, and public policy to reframe political theory using the perspectives of African Americans and the frame of race.2 Instead of relying upon a previous canon of political thinkers, Brommell argues for the importance of looking to “black Americans such as David Walker, Maria W. Stewart, Frederick Douglass, Anna Julia Cooper, W. E. B. DuBois, Nella Larson, James Baldwin, Malcolm X, and Toni Morrison.” Brommell then asks, “How does the thinking of these writers and thinkers address our current crisis of democracy?”3

Brommell places historical narrative into the service of recent debate to identify strains of black political thought that can be interwoven around the organizing thread of anger and indignation. So not only does this book chart a particular continuum of black political thought, it is also an historical treatment of indignation as an elemental force in black politics. Brummell constructs this narrative primarily to reframe current discussions of democracy that focus on deliberation and consensus and that overlook and ignore the centrality of black writers to contemporary debates about democracy and political engagement. I am not sure that I fully agree with Brommell’s emphasis on the coherence, influence, and decline of “a broadly liberal tradition that held sway from Franklin Roosevelt through Jimmy Carter.”4 However, this reaction aside, I was interested in his emphasis on the idea of indignation.

Using indignation as an analytical concept is both derivative and novel. This usage is not new in that much of black studies and gender studies arose implicitly and intrinsically from individuals who were indignant and who thought and wrote specifically about their indignation. However, it is new and significant to construct a story of indignation for the purpose of reframing how scholars think about democratic political theory.

Brommell acknowledges the vast diversity of black political reflection, but he traces indignation as a phenomenon and a theme that has motivated many to seek “full citizenship for black Americans by transforming democracy for all Americans.”5 Brommell argues that his understanding of indignation is as something that is neither neatly assimilationist or separatist, liberal or republican, or uncompromising or pragmatic. He posits that indignation is a form of anger and that being indignant is both experience and action. It is visceral and immediate but also calculating and self-reflective. While acknowledging that indignation easily leads to impasses of communication between conflicting parties, Brommell counters that black Americans like, “[Pauli] Murray, [James] Bevel, [James Weldon] Johnson and [James] Baldwin all indicate that indignation can be transformed into a creative political disposition if it is turned back upon itself, so that it becomes a self-critical, self-opposing energy.”6

As an historian, Brommell’s definition of indignation has made me think about the usefulness of the term as an analytical category applied to the turn of the nineteenth century. I think the term holds analytical promise and that Brommell’s analysis, albeit brief, of David Walker is worth mention. Using David Walker’s Appeal to illustrate the dialectical quality of black indignation, Brommell highlighted the “simultaneously other-opposing and self-opposing quality of black democratic indignation” in David Walker’s Appeal to the Colored Citizens of the World (1829).7 Brommell sees Walker as an excellent early historical example of indignation as it was expressed by black Americans. However, Brommell also finds a conflict within Walker’s expressed frustration. Walker legitimates the indignation of slaves to the point of justifying and encouraging slave revolt. However, he also chastised slaves for not being indignant or lacking the dignity to rebel and overturn plantation society. Walker is critical of both master and slave.

Using Bromell’s lens in a more historically way, Walker’s indignation is comprised of multiple and sometimes competing parts. Put simply, as scholars, like Peter Hinks, have noted, Walker suggested the destruction of American nationalism, yet Walker was also deeply invested in the idea that American nationalism could be all-inclusive and constructive.8 Walker justified the rage of slaves, but he also felt the need to ask slaves to become angry. Walker forecasted a slave uprising that would break down civil society, but he was also deeply invested in the democratic ideas and institutions that allowed him, as a northerner from the south, to have his critique read and heard. In addition, Walker demanded a more just society, but he also elided the rights of women and issues of gender by conflating human rights with the rights of men.

Complexities continue to abound. I have written earlier about Maria Stewart. She is an interesting case because she embodied a critique of Walker’s masculine language while simultaneously expressing her inspiration for Walker’s assertive exasperation. Stewart left Boston in 1833, upset at the unsettled reactions of black Bostonians to her public speaking. When it came to gender, Stewart was caught in a gendered bind. When it came to expanding the inclusiveness of American nationalism and democracy in the early antebellum era, it was not just Walker and Stewart who became profoundly upset with prevailing norms of race and gender, many if not all people of color experienced and expressed deep frustration and aggravation. In their everyday lives and in their published writing, they were forced to confront the question of democracy constantly, continually, and with profound acuity.9 However direct were their responses to problems of oppression and marginalization, their answers were not uncomplicated. It is for this reason that I agree with one of Brommell’s basic assertions; it is curious, and not so curious really, that black thought and action have not readily been seen as substantive sources for contemplating political thought and theory.

Comments on “Thoughts about Indignation and Democratic Political Theory”