loading...
By J. T. Roane January 18, 2019 Comments Off on Them Goon Rules: A New Book On Radical Black Feminism

This post is part of our blog series that announces the publication of selected new books in African American History and African Diaspora Studies. Them Goon Rules: Fugitive Essays on Radical Black Feminism was recently published by the University of Arizona Press.

The author of Them Goon Rules is Marquis Bey, a Ford Foundation Dissertation Fellow and PhD candidate in the English department at Cornell University. His work, broadly speaking, concerns Black Feminist Theorizing, Transgender Studies, Critical Theory, and Contemporary African American Literature. More specifically, he thinks and writes about Black feminist critiques of gender; fugitivity and its relation to Blackness; and trans theory as a mode of disrupting hegemonic gender, particularly as it relates to feminist Blackness. He is completing his dissertation, entitled “The Blacknesses of Blackness: Fugitivity, Feminism, and Transness,” in which he thinks through a radical recalibration of Blackness-as-fugitivity as inflected with and by Black radical feminism and transgender epistemologies. His academic work on Blackness, transgender subjectivity, and feminist critique has appeared, or is forthcoming, in academic journals such as The Black Scholar, Souls, CR: the New Centennial Review, Black Camera, Transgender Studies Quarterly, Palimpsest, and others.
Marquis Bey is an English PhD candidate at Cornell University. He is a recipient of a Humanities New York public humanities fellowship as well as a Ford Foundation Dissertation fellowship. He writes both academically and popularly on Black feminism, transgender subjectivity, literature, and politics. Follow him on Twitter @marquisdbey. 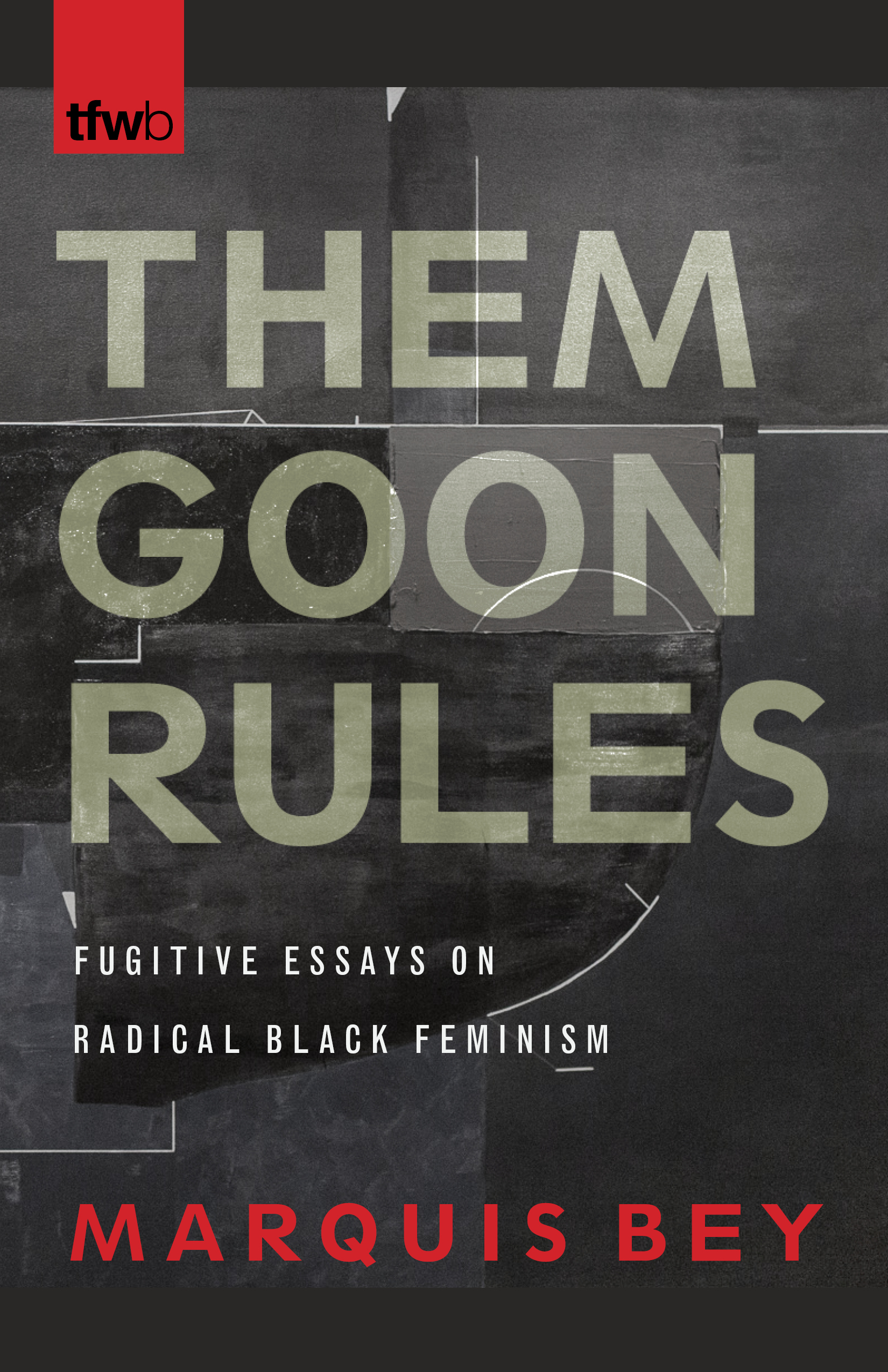 Marquis Bey’s debut collection, Them Goon Rules, is an un-rulebook, a long-form essayistic sermon that meditates on how Blackness and nonnormative gender impact and remix everything we claim to know.

A series of essays that reads like a critical memoir, this work queries the function and implications of politicized Blackness, Black feminism, and queerness. Bey binds together his personal experiences with social justice work at the New York–based Audre Lorde Project, growing up in Philly, and rigorous explorations of the iconoclasm of theorists of Black studies and Black feminism. Bey’s voice recalibrates itself playfully on a dime, creating a collection that tarries in both academic and nonacademic realms.

Fashioning fugitive Blackness and feminism around a line from Lil’ Wayne’s “A Millie,” Them Goon Rules is a work of “auto-theory” that insists on radical modes of thought and being as a refrain and a hook that is unapologetic, rigorously thoughtful, and uncompromising.

“Marquis Bey has gifted us with more than a collection of essays about Blackness, feminism, and queerness—it is a tome for and with the ‘ontologically criminalized.’ Bey demonstrates a distinctive radical vulnerability that can only be the result of working in and through a Black queer feminist lens. Unapologetically, this text dances, bends, moves, breaks open and through language—an elaborated nah! There is powerful poetry here asking that we, scholars who believe in freedom, interrogate our own methods and motives again and again. This book is courageous as it dwells, a break in the break. A must-read for any scholar, poet, or (non)human seeking the spectacular possibility of taking flight.” —Kai M. Green, Williams College

J.T. Roane: What impact do you hope this work has on the fields of Black Feminist and Black Queer Studies?

Marquis Bey: My hope is that Them Goon Rules impacts the fields of Black feminism and Black queer studies by way of a radical recalibration, an Ellisonian thinker-tinkering, if you will. Inasmuch as Blackness, particularly as it intermingles coalitionally with queerness and feminism and transness, is thought of in parochial terms—that is, in terms that understand Blackness as the province of only certain bodies and as an exclusionary category—I want to open Blackness up. My book is a perpetual opening of Blackness to its fugitive excesses. It is an insistence on the inherent commingling of Blackness with feminism and gender nonnormativity and queerness. I am asking: what if we understand Blackness as a critical posture, as a philosophical disobedience as Hortense Spillers might call it, as a constant refusal? What if feminism and queerness are endemic to Blackness as understood in this capacious sense? That is what I insist upon, and the essays are glimpses, timid as they may be, into what happens when we start from this point.