In May 1947, two Martinican women, Yva Lero and Angèle Valery, attended the second congress of the Union of French Women in Paris. As representatives of the feminist organization the Union of Women of Martinique (UFM), they spent four intensive days in dialogue and collaboration with other French feminists. Together the delegates at the congress condemned bread rationing in France and the war in Indochina. They also demanded the creation of daycare centers so that French mothers could work outside the home.

But, as French women from a Caribbean island that until only three years prior was still a colony, Lero and Valery knew that they had a more difficult fight before them than their white counterparts did. They knew, for example, that women in France had access to social security and financial assistance from the government to care for their families while women in Martinique did not. They argued that by refusing to extend these rights to Martinican women, France continued to maintain their colonial status and second-class citizenship.

Lero’s and Valery’s interventions at the historic French congress modeled many core principles of Black feminist thought. As French citizens from the Caribbean, they reached across the Atlantic to reimagine ideas about local and transnational geographies in their feminist work. They also collaborated with white feminists as allies, but recognized the limits of that allyship, crafting feminist politics that more closely reflected their lived realities as Martinican women.

The principles of Black feminism that informed Lero’s and Valery’s activism in France in 1947, resonate also in Akwugo Emejulu’s and Francesca Sobande’s edited volume, To Exist is to Resist: Black Feminism in Europe. This powerful text highlights at least three core elements of Black feminist methodology: geography, genealogy, and knowledge production.

The most evident of these methodologies is the importance of place. Like the transnational reach of Lero’s and Valery’s demands, this volume’s extensive geographic scope attends to the questions of location that have always been crucial to Black feminist activism and thought. Gabriella Beckles-Raymond’s essay on “home” for Britons of Caribbean heritage, for example, shows the multiple and complex definitions of ideas such as local, transnational, and global. Beckles-Raymond shows home to be both “here” in Britain and “there” in the Caribbean. She highlights the entanglement of home as geographic location, physical space, and site of expression, empowerment, and potential aggression.

These reflections on geography for Black feminists have a long history. When the UFM was founded in 1944, the organization noted that its name was not the Union of Martinican Women but rather the Union of Women of Martinique. The difference was subtle but profound. It encouraged women to rally around their shared presence and lived experiences in Martinique as home, rather than around a potentially exclusionary identity based on Martinican citizenship.

Beckles-Raymond’s disentangling of home is but one of the many contributions to To Exist is to Resist that explores Black women’s spaces and collective organizing through the lens of migrations and Europe’s relationships with its former colonies. The geographic scope of these essays engages in feminist theorizing that, as Sara Ahmed writes, “involves challenging the local through and in relation to the transnational.”1 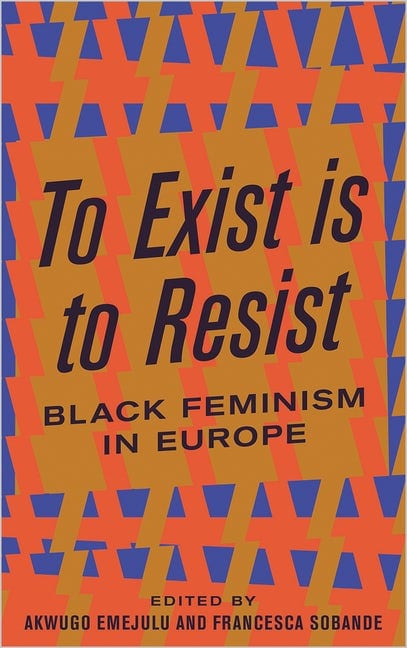 The anthology is also invested in thinking about past and present as it responds to a deceptively simple question: Who counts as a Black feminist? Taken as a whole, the essays that make up the collection reclaim forgotten or ignored genealogies of Black feminist organizing. Pamela Ohene-Nyako traces the history of Black literature and literary spaces in French-speaking Switzerland to the 1950s. Mwasi Collectif reminds us that Afrofeminist organizing in France did not start with them. Black feminists throughout Europe belong to a long tradition of working toward their collective liberation.

But this investment in genealogy goes beyond naming and counting. It goes beyond recovery as the beginning and end of centering Black women’s voices. As Mia Bay, Farah Griffin, Martha Jones, and Barbara Savage noted in their edited collection Toward an Intellectual History of Black Women, “To construct a field of study from the standpoint of black women takes us from the essential work of recovery through the development of alternative sources and modes of analysis.”2

The Black feminist genealogies that emerge from the collected essays in To Exist is to Resist, emphasize inheritances as one of these alternative modes of analysis. They ask us to think about what those who have gone before made possible, and how the gaps and silences in their work allow Black feminists in Europe today to dream and enact that which was unspeakable or unimaginable in the past.

In reading the volume, it is difficult to avoid altogether the question, what is the Black in Black feminism? It is perhaps a question that should not be asked because it runs the risk of demanding a reductive, essentialist, and singular definition of blackness. But it is also worth asking because in To Exist is to Resist, Black takes on a shape-shifting quality. In some ways it is elusive. The editors use the terms “black feminist” and “afrofeminist.” They are not interchangeable but the distinction between them is not clearly articulated. In other ways too, the meanings of Black in this volume are clear. Blackness is decidedly positioned within or in relation to Europe. It engages with Black feminism in the United States but also refuses to be overdetermined by it.

For better or worse, Black feminism in Europe has not had the same level of visibility as in the United States. However, as this book’s genealogies show, its history and presence run just as deep. Nearly a decade ago, Lola Young reflected on racial markers in feminist thought in her article “What is Black British Feminism?” She noted, “feminism is only ever prefixed by `white’ when it is being problematized as such: most of the time its whiteness is rendered invisible by its universalist pretensions. … That descriptor `white’ coupled with feminism connotes something similar to the supremacist `white’ in `white power’, and does not suggest emancipatory, progressive politics concerned with equality and social justice.”3 Young’s reflection is important because it critiques the idea that Black feminism is only and always ever particular, conceived of in opposition to a white feminism that is coded as universal.

Black feminism is not a reversal of white feminism. It is not reactionary. It is an imagining all of its own. As Emejulu and Sobande note, “black feminism is in no way an afterthought or a derivative of white feminism but rather a radical praxis for the liberation of everyone–starting with Black women.” It is the insistence on seeing Black women as not only subjects of study but also as producers of knowledge as Johanna Melissa Lukate does in her essay about Black German women’s hair as sites of racial performance. It is intellectual thought and political activism, but it also confounds the division between theory and practice. It is the loving letter between Ego Ahaiwe Sowinske and Nazmia Jamal that refuses the disappearing of Black feminists from academic and public discourses that nevertheless use their ideas.

When Yva Lero returned to Martinique after the 1947 congress of French feminists, she did not anticipate that one of the most devastating blows to the work of the Communist Party-aligned UFM would come from within the island itself. The break between the Martinican poet and politician, Aimé Césaire, and the Communist Party, left the UFM in disarray. Some feminists jumped ship and joined Césaire’s Martinican Progressive Party (PPM). Others tried to regroup under the communist banner. Today we have a plethora of scholarly analyses of Césaire’s discontent with communism, a move whose symbolism has been abstracted so far beyond the Martinican context that it seems almost futile to try to piece together what local, transnational, and global might have meant in this historical moment. Even more distressing is the disappearing of Lero and the women of the UFM from this scholarship, women whose analyses and critiques of communism went far beyond the limits of Césaire’s thought to account for race, class, and gender in ways that Césaire never could. Ultimately, To Exist is to Resist insists on Black feminism as presence in the face of these disappearances. It speaks of the radical, disruptive, generative presence of Black feminists in Europe whose work remains crucial to collective imaginings of freedom.

Annette Joseph-Gabriel is a scholar of contemporary Francophone Caribbean and African literature with interdisciplinary specializations in Black transnational feminisms and slavery in the Atlantic world. She is currently an Assistant Professor of French and Francophone Studies at the University of Michigan. Her book, Reimagining Liberation: How Black Women Transformed Citizenship in the French Empire, (University of Illinois Press, 2020) mines published writings and untapped archives to reveal the anticolonial activism of Black women in the French empire. Her articles have appeared in Small Axe, Eighteenth-Century Studies, Slavery & Abolition, Nouvelles Études Francophones, and The French Review. She is managing editor of Palimpsest: A Journal on Women, Gender, and the Black International. Follow her on Twitter @AnnetteJosephG.

Comments on “The Work of Black Feminism in Europe”