From the eighteenth century to our own time, a range of African Americans have traveled “back” to Africa in hopes of finding a refuge from American slavery and its aftermaths. Many of them, however, encountered not so much the comfort of the motherland’s embrace but a reminder of the differences between people raised on different shores of the Atlantic Ocean. These difficulties make the story of James Churchwill (“Church”) Vaughan especially remarkable: following his formerly enslaved father’s deathbed advice, he migrated from his South Carolina home to Africa in 1853. There, in spite of repeated, life-threatening obstacles, he made a life of prosperity and, indeed, freedom.

Like some 13,000 other African Americans, Church got to Africa through the assistance of the American Colonization Society (ACS).  In Liberia, however, Vaughan learned that settler society was in its own way as exclusive and exploitative as the one he had left behind. As soon as he got a chance to leave—even to an unknown destination with ambiguous allies–Church Vaughan took it. He accepted an offer of employment in Yorubaland (now southwestern Nigeria), 1200 miles to the east of Liberia, with missionaries from the Southern Baptist Convention—a religious denomination founded on its support of American slavery. The missionaries employed Vaughan as a carpenter and arranged for his transportation to Lagos.

Vaughan arrived in Yoruba country during what was known locally as the “age of confusion.” Between the 1820s, when the previously-dominant Oyo Empire broke apart, and the 1890s, when British colonial power in the region was consolidated, Yoruba people were engulfed in warfare. Soldiers and raiders seized tens of thousands of captives, many exported as slaves to the Americas. Others were rescued by British naval patrols and landed at Sierra Leone, where some converted to Christianity and later began an exodus back to Yorubaland, joining other ex-slaves who managed to return from Brazil and Cuba. In the violence, old communities were destroyed and new ones were constituted. Meanwhile, British gunboats bombarded the port of Lagos in 1851, beginning a series of aggressive measures to combat the slave trade there, and missionaries from Britain and a few from the United States pushed inland.

On a small scale, Church Vaughan faced the same questions as Yoruba people did: with whom did he belong, and who would help keep him safe? Vaughan stayed within the orbit of American missionaries only long enough to get on his feet; even when he continued to work for them, he established his own independent household. He also avoided Yoruba politics, living between two rival city states. In Atlantic Africa, however, autonomy meant danger rather than freedom. During a brutal war in 1860, he was taken prisoner along with many others, thousands of whom were shipped as slaves to Cuba. Had he not escaped, he could have been marched to Lagos and loaded on a slave ship.

Vaughan fled to Abeokuta, a relatively new town composed of displaced Yoruba from near and far, and by necessity rejoined the American missionaries. He married a refugee from the nearby Kingdom of Benin—perhaps a former slave–who gave birth to their first child in 1866. But his Christian connections set him at odds with local authorities. The following year, political leaders in Abeokuta, frustrated with the expanding influence of the British in Lagos, expelled all Christians from the town. With only the clothes he wore and £5 in his pocket, Vaughan put his son on his shoulders and walked with his wife and others for three days until they reached Lagos.

In 1869, Church Vaughan’s surviving relatives in South Carolina heard from him for the first time in years. While they were struggling in the Reconstruction South, Church was building a prosperous business and a new family in Lagos, now a British colony. His success was clear from the gifts that he sent back to the United States: small canvas bags, filled with gold coins. 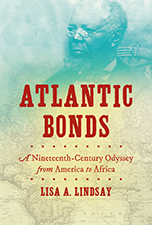 It may sound surprising that an immigrant to Africa was able to send gold to his relatives in the United States, and that they needed it so badly. In fact, there were some similarities between Lagos and the American South in the 1860s and ‘70s. In both places, slavery had been outlawed through outside initiatives (the British and US governments) while officials closer to the ground equivocated. The key difference between the two, however, was white supremacy. In South Carolina, not only did former slaveholders and their supporters endeavor to restrict the freedoms of the previously enslaved; in their vision, all people of color should be subordinated, if necessary by violence. In Lagos, to the contrary, colonial rule did not bring an influx of Europeans, and white supremacy did not flourish. The expansion of trade and the early colonial administration created new opportunities for indigenous and diasporic Africans—many of whom, in fact, were slaveholders. Church Vaughan did not himself own slaves, but he prospered in the social and economic space between Lagos’s most elite merchants and its most downtrodden dependent workers. He and other newcomers to Lagos were largely free from extractive patronage relationships and personal violence, and they were free to make a good living.

In this way, Vaughan had opportunities in colonial Lagos that his relatives in South Carolina no longer enjoyed. He made a new beginning there as a carpenter, opened a profitable hardware business, and acquired land and houses. He made sure his children were educated, and he set his two sons up in commerce. But Vaughan never returned to the United States, though his descendants kept in touch with their American relatives for the next century.

Over time, freedom as prosperity and autonomy came under threat in Lagos (as it already had in the post-Reconstruction US). In the last two decades of the nineteenth century, increasing numbers of Europeans pushed Africans out of their posts in the civil service and foreign-owned commercial firms. Though elite Africans continued to prosper, their opportunities became more circumscribed than before. They felt this especially in the missionary churches, which previously had fostered African advancement but whose white leaders now sought to closely control African congregations. Within the Baptist church—with which Vaughan had been associated for thirty years–a new generation of white missionaries subjected him and other members to racist condescension.

One way that Lagosians protested racial discrimination was similar to moves African Americans were making at the same time: they founded their own, separate, institutions. In 1888, Vaughan and several other diasporic Africans formed the Native Baptist Church, the first non-missionary church in West Africa; they were followed by separatist movements in other denominations. They linked their struggles to those against slavery, referring to the mission church as a barracoon and their subordination to white missionaries as bondage.

James Churchwill Vaughan died at his home in Lagos in 1893 at the age of sixty-five. He had outlived by far all of his eight siblings in America, and he left his widow and three children in material comfort. Indeed, he had founded what became an important Lagos-based Nigerian family, which over the next decades became not just prosperous but rich, and deeply involved in local and anticolonial causes. Vaughan’s passing was announced in Lagos newspapers, and he was buried under an imposing monument in the cemetery of the city’s elite.

Church Vaughan’s led an extraordinary life, but one also connected to wider histories. His story was one of survival, prosperity, and activism against a seemingly endless series of challenges. It reveals an Atlantic world in which slavery was nearly ubiquitous and freedom was ambiguous. In that way, the title of my book about Vaughan, Atlantic Bonds, refers to ties of servitude and their legacies. But the title also invokes different types of bonds: of kinship lost, sought, or maintained across the ocean; of new communities created or joined in the aftermath of migration; and of political, ideological, and personal networks that connected far-flung locations. With his transatlantic outlook, Church Vaughan could compare the particular forms of oppression for black people in the American South and different parts of West Africa like almost no one else in his time. In his adopted homeland, his transcontinental perspective opened up new possibilities and critiques as well as alliances. Despite dangers of enslavement, limits on freedom, and constraints on citizenship, some determined, savvy, or lucky refugees from slavery and white supremacy were able to find shelter, and even make their own marks, in nineteenth century Africa. One of them was Church Vaughan.

Lisa A. Lindsay is Bowman and Gordon Gray Distinguished Term Associate Professor of History at the University of North Carolina, Chapel Hill. Her research centers on the social history of West Africa, particularly Nigeria, and on links between Africa and other parts of the world. She is the author of several books and edited collections including Working with Gender: Wage Labor and Social Change in Southwestern Nigeria (Heinemann, 2003) and Biography and the Black Atlantic, co-edited with John Wood Sweet (University of Pennsylvania Press, 2013). Her most recent book is Atlantic Bonds: A Nineteenth-Century Odyssey from America to Africa (University of North Carolina Press, 2017).