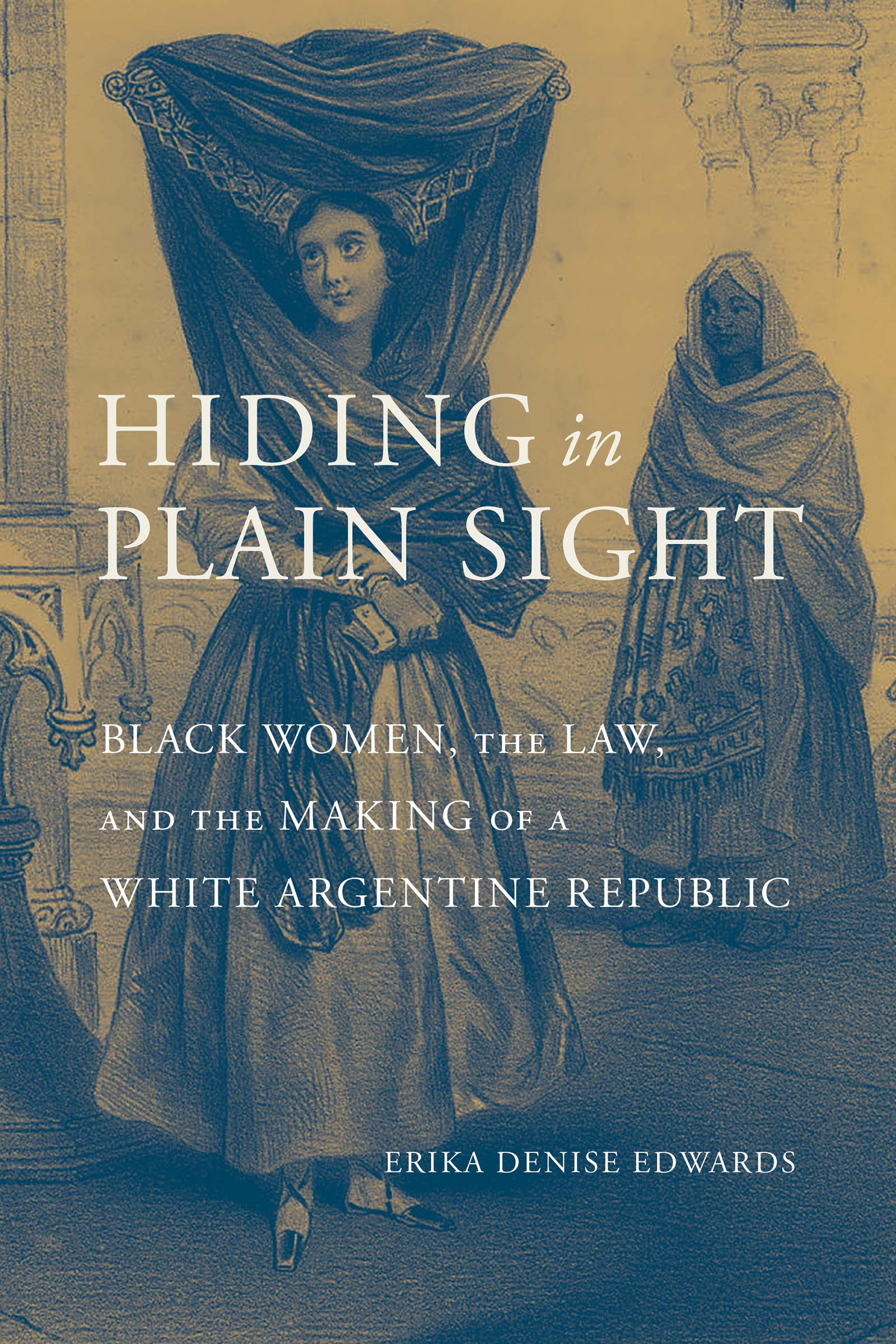 “The discovery of personal whiteness among the world’s peoples is a very modern thing,” observed W.E.B. Du Bois, “a nineteenth and twentieth century matter, indeed.”1 The exposition of whiteness as a novel social construct and political tool masquerading as a natural category has been ably elaborated by several scholars in the last forty years. Erika Denise Edward’s new book, Hiding in Plain Sight: Black Women, the Law, and the Making of a White Argentine Republic, is both innovative as well as firmly grounded in the rich tradition of scholarship that illuminates the manifold processes, policies, sites, and situations in which notions of whiteness were negotiated, reified, and contested across the New World.

Hiding in Plain Sight counters conventional narratives about the demographic decline of Afro-Argentines as it centers the initiatives of African-descended women in capitalizing on the privileges of whiteness. Edwards, an Associate Professor of colonial Latin American History at UNC Charlotte, addresses broad questions regarding the complex relationships between race and class in Latin America, including “how the caste societies of the colonial and early national periods were gradually transformed into the class societies of the twentieth century.”2 Parallel to this socio-political shift, many have speculated about the ostensible reduction of Afro-Latin populations, which originally comprised significant if not majority numbers throughout colonial Spanish America. Explanations range from high mortality rates during independence and civil wars (in which Afro-Latin men tended to serve disproportionately) to assimilation. George Reid Andrews made a classic study of the purported nineteenth-century “disappearance” of Afro-Argentines. However, while Andrews focused on Buenos Aires, Edwards went to the archives of Córdoba, a much smaller city — but one more typical of the region — and her findings are distinctive.

Focusing on records from 1776 to 1840, Edwards proceeds, thematically and chronologically, to contextualize and build her argument that, in Córdoba, whitening was a process initiated by Black women in the private sphere, as mothers, wives, concubines, and domestics, before it was institutionalized. Edwards defines blanqueamiento as the “whitening process in Latin America that claimed a white nation was a modern nation and advanced economic and political policies to increase European immigration,” a position first advocated by nineteenth-century commentators from Argentina to Cuba. Edwards directly challenges this conventional explanation for “Black invisibility.” As Latin American societies transformed from highly stratified colonial communities with enslaved subjects and finely gradated notions of caste to independent republics with emerging definitions of citizenship, the customs, language, and law of race shifted to venerate whiteness above all other social markers. According to Edwards, Afro-Argentine women navigated this transformation in a way that allowed them to become the architects of their own invisibility.

Edwards first orients the reader by describing how privilege was reserved for Spaniards in the earliest colonial period. Yet, some Afro-descendants and Native Americans — often variously identified as castas — experienced social mobility through marriage, baptism, military service, miscegenation, and manumission. Here Edwards lays out her core argument in which Afro-Argentine women are the protagonists: “Their ability to subvert customary practices and legal codes that privileged Spaniards constitutes the basis of black erasure in Córdoba.” The chapters that follow discuss specific cases where Black women used the intimate circumstances of family: cohabitation, marriage, and motherhood, to secure the protections and privileges of whiteness for themselves and their children.

While the Afro-Argentine women whom Edwards documents tell us about late colonial and early republican Córdoba, her study resonates with work across the Americas. The Afro-Argentine women clearly exhibit the “legal consciousness” that Herman Bennett first described among colonial Afro-Mexicans navigating ecclesiastic and royal strictures to enlarge their own autonomy. More recently, Martha Jones explored how African Americans strategically performed citizenship in antebellum Baltimore.

Edward’s chapter “‘Her Best Performance:’ From Slave to Señora,” epitomizes a theme throughout her book: whiteness and honor were very much performative — cultural codes comprised of and transmitted by “reputation,” comportment, dress, and education. Edwards’ final chapter, “Lessons of Motherhood: The Beginnings of Institutionalized Whiteness,” examines the early nineteenth-century establishment of schools to “uplift” African-descended girls and how educational initiatives communicated and conflated civic notions of motherhood with a vision of citizenship’s link to whiteness.

Hiding in Plain Sight highlights cases of individual women whose choices illuminate nuanced intersections where gender, intimacy, and fluid constructions of whiteness inform and are informed by notions of class, race, and station. Aspects of this may be specific to Córdoba – which was never reliant on plantation slavery, but developed as a throughway between the entrepôt of Buenos Aires and the silver mines of Potosí – a city where enslaved residents usually provided domestic or artisanal work. Yet again, Edwards writes about her subjects in ways that connect to Latin America at large. Her chapter “A Woman of His Class: Contested Intermarriages” engages many of the issues explored in Verena Martinez-Alier’s Marriage, Class, and Color in Nineteenth-Century Cuba. And while none of her subjects applied for a Gracias al Sacar, a legal decree that conferred privileges associated with whiteness, Edwards deftly explores the issues of honor, respectability, and race.

Edwards writes about the complexities of race in Latin America with tremendous clarity. The U.S. developed a uniquely bifurcated conception of race, epitomized by the violence of Jim Crow in the nineteenth century and the infamous one-drop rule codified in the twentieth. However, in Latin America, while stratification was book-ended with the dishonor attached to slavery and the honor that inhered in nobility, gradations were legion. In Latin America racial mixture was considered declasse but not anathema, thus hypodescent (whereby a child automatically inherited the status of the lower caste parent) did not always hold sway. Moreover, and this is one of Edwards’ key points, the active presence of Native communities strongly impacted the operationalization of race. Finally, Spanish America had a much different history with slavery and race (vis-á-vis Anglo America) that preceded New World settlement. Even the word race (raza) was of variable and often little use in the colonial period whereas notions of honor, nobility, unbroken Catholic lineage, and legitimate birth intersected with popular terms like calidad (quality), naturaleza (nature, character) and mala sangre (bad blood) which were more likely to be invoked to describe someone’s socioracial status.

Despite the ubiquity of “white supremacy” across the Americas, the meaning, boundaries, negotiation, and political valence of whiteness differed across space and time. While Edwards’ work offers a valuable window onto the dynamics of race-making, in many instances I found myself wishing she had used a term akin to proto-whiteness instead of whiteness. Edwards shows us the building blocks, how old dichotomies between plebeians and patricians, notions of blood purity originally meant to exclude Jewish and Islamic Iberians, and new nations rhetorically built on freedom but practically and demographically built on enslavement, generated novel conceptions of whiteness. Yet, I was struck at times when terms like español and honor were conflated with the term whiteness in Edwards’ analysis, especially when terms referring to color were often conspicuously absent in her citations. In a city like Córdoba, which as Edwards shows, continued to largely identify in terms of hierarchy over citizenship, whiteness per se may have had less work to do until later in the century.

Hiding in Plain Sight is a concise and compelling study that innovates traditional understandings of blanqueamiento by recognizing African-descended women as central to the process. Edwards argues that “black invisibility in Córdoba is a story about resistance.” She makes an important contribution that advances our understanding of historical complexity and underscores Ann Twinam’s assertion, “There never was a typical slave, nor was citizenship an uncontested category.”3 The women in Edwards’ study are presented as making voluntary, pragmatic choices about sexual partners and self-identification that, for many, were not available. Interracial unions occurred continuously throughout the Americas under varying degrees of coercion, exigency, and intimacy. I am reminded of Brooke Newman’s A Dark Inheritance: Blood, Race, and Sex in Colonial Jamaica, which points to the legal initiatives taken by Afro-descendants in Jamaica to claim the full rights of English subjects in the eighteenth century – and which speaks directly to the generations of non-consensual sexual encounters that engendered mixed-race populations.

Overall, Edwards makes a thought-provoking case for “the active role of women of African descent in the whitening process” and enriches and complicates our understanding of intimacy and power. Edwards’ research illustrates both K. T. Ewing’s recent assertion that “Black women in the archives are…stakeholders,”and the fact that Black women have always been active stakeholders in the nation.4

Author Christina Proenza-Coles, holds a dual doctorate in sociology and history from the New School for Social Research. She has been a lifelong student of American culture and history while living and working in Miami, New York, Havana, and Charlottesville. From 2004 to 2011 she was an Assistant Professor of the Atlantic World/African Diaspora at Virginia State University. Follow her on twitter: @ProenzaColes.